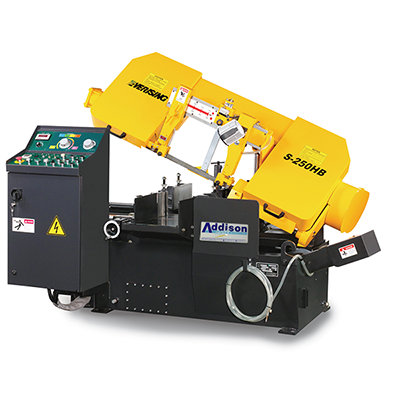 Parker Precision, a West Midlands-based engineering company, has invested in a new automatic shuttle-vice bandsaw from Addison Saws. The saw, an Everising S-250 HB-NC model, is bringing efficiencies of 60% to Parker’s sawing line and is being used to feed no fewer than 20 CNC milling machines.
“With a growing order book, we identified the need to further enhance our ability to precision-cut heat-treated lengths of aircraft-grade stainless steels and aerospace alloys,” says Parker Precision’s marketing director Marc Corns.

A trip to see an Everising S-250 HB-NC bandsaw at the site of a local Addison Saws’ customer was enough to convince Parker Precision that the machine would more than fulfil its cutting requirements.
“Having seen the S-250 saw in action, we were happy to forgo cutting trials as we were more than convinced it would meet our needs,” says Corns. “However, in view of the fact that we work with a wide range of exotic materials, Addison Saws recommended variable clamping pressure as an optional feature in order to protect the integrity of even the most delicate tubes.”
Duly installed, the Everising S-250 HB-NC automatic shuttle-vice bandsaw is already bringing considerable benefits to production strategies at Parker Precision’s Bilston site. Significantly quicker than the saw it replaced, the Everising machine has more than halved the time it takes the precision engineering company to cut steel and aluminium into typical bar sizes of 50 mm diameter and 180 mm length.
“The amount of scrap material we generate has also been minimised, while the saw’s precise cutting action has reduced the need for deburring,” concludes Corns.
For further information
www.addisonsaws.co.uk 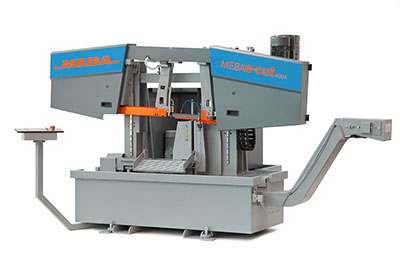 ADS Precision, in partnership with German saw manufacturer MEBA Sawing Solutions, is releasing the MEBAe-cut CNC production bandsaw into the UK market. Powered entirely by electrical drives – making them cheaper to run that a small maintenance saw and devoid of leaking hydraulics – twin-column machines are available in three capacities of 400, 500 and 600 mm, prompting the model designations MEBAe-cut 400, MEBAe-cut 500 and MEBAe-cut 600. Said to be the quietest and cleanest machines on the market, the MEBAe-cut series is aimed at medical, test house, aerospace, automotive and high-precision workshops.

All the drives on MEBAe-cut models are powered by soft-start motors, eliminating voltage spikes. Electrical axles are moved with precision, resulting in efficient power consumption and increased blade life. Indeed, electric-drive systems have a significantly lower power demand when compared with a hydraulic-based system. For example, take material clamping: hydraulic clamping requires permanent pressure that consumes energy during a cutting cycle. In contrast, electric clamps only require energy for the vice movement (clamping and releasing), not during the cutting cycle.
MEBAe-cut machines are equipped with a newly developed electric material clamp. The material is clamped in the main and in-feed vice by a servo-controlled spindle drive. Here, the clamping pressure can be adjusted individually for each application and be preselected via the machine control. As a result, thin-walled tubes can be clamped safely.
The saw feed works via a servo-controlled lead ballscrew spindle with automatically controlled cutting pressure and feed control. A two-handed operating system for rapid vertical movement is included as part of the control.
Although standard models are semi-automatic, MEBAe-cut is also available as a 90° fully-automatic machine, designated by an ‘A’ suffix. Automatic machines feature an ergonomic panel based on Windows CE system software and a 50-program memory.
For further information
www.adsprecision.com 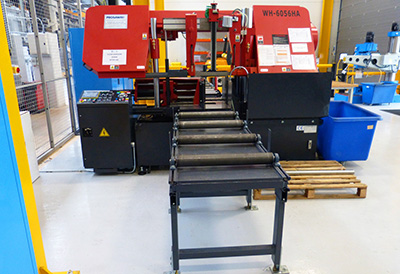 Until recently, all requirements for sawing at the Nuclear Advanced Manufacturing Research Centre (Nuclear AMRC) in Rotherham were undertaken by subcontractors, but this route was eventually considered to be too time consuming and expensive. It was therefore decided that the most effective solution to all the possible requirements for sawing would be to acquire an in-house sawing facility.

Although usage would be almost exclusively focussed towards research, testing, maintenance or producing samples, often in small batches, it was recognised that any new sawing facility would need to be capable of processing what are termed “exotic” materials to a high degree of accuracy.
After assessing a variety of different sawing systems from five independent suppliers, Prosaw was identified as the company most capable of delivering a cost effective and optimum system suitable for all possible applications. A WH-6056HA twin-column bandsaw was selected as the most advantageous solution and was duly installed by Prosaw engineers.
Says maintenance manager Craig Hamp: “Most of the usage of the saw is intermittent as it is normally for either cutting small batches or one-offs, so whereas volumetric throughput is not normally a prerequisite, accuracy undoubtedly is. This machine certainly fulfils that requirement, regardless of whether it is used for sawing components for maintenance purposes, testing, research or producing samples.”
For further information
www.prosaw.co.uk 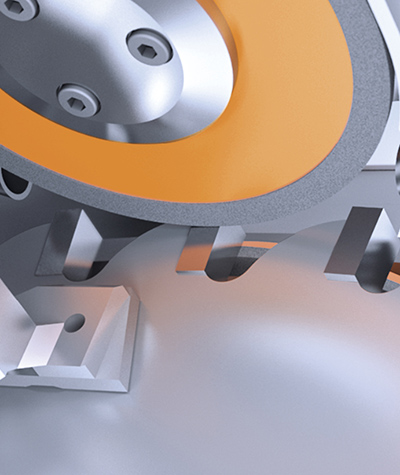 Vollmer says it is accelerating the processing of carbide-tipped circular saw blades with its new CC 355 production system. The CC 355 enables circular saws for cutting wood to be fully sharpened, including all tooth faces, tooth tops and side angles, in a single working cycle. Four grip arms automatically carry the saw blades from the loading system to the three machining stations. Working through up to 800 teeth per hour, the Vollmer system can process circular saws with a diameter of between 150 and 355 mm.

The CC 355 is equipped with two machining stations for tooth faces and tooth tops, plus one station for side angles. Users can position a stack of un-machined parts either on the left or right, thus providing a free choice of the machining sequence direction and the order that saw teeth are produced. A total of 17 CNC axes control the procedure.
Dr Stefan Brand, CEO of the Vollmer Group says: “The linchpin of our CC 355 is sharpening technology for carbide-tipped circular saws that has been over six decades in the making. Furthermore, the machine’s automated system makes the CC 355 perfect for saw manufacturers who want to produce large volumes of parts, and who also place exacting demands on the tools they use for woodworking.”
For further information
www.vollmer-group.com 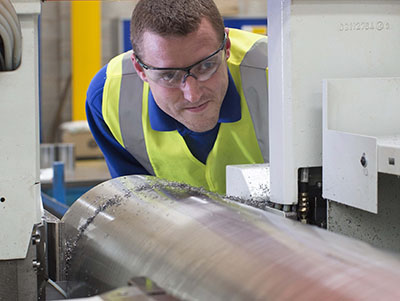 At the Newcastle-under-Lyme facility of special metals stockholder, Langley Alloys, two German-built KastoTec AC4 bandsaws specified for cutting with tungsten carbide tipped (TCT) blades have replaced four out of six machines from a different supplier that are effective only when bi-metal blades are used.

As the down-feed on both KastoTec machines is three times faster, overall cutting capacity across the six machines has increased by one-third, while the floor area occupied has decreased by a similar amount. This is precisely what Langley Alloys needed, as orders have increased sharply since the start of 2017 but there was no room on-site for more bandsaws. As an added benefit, the extra space created has allowed the stockholder to increase the range of materials and sizes that it holds to well over 1000 line items.
Business development director Rodney Rice says: “Responsiveness to customer demand is crucial. The installation of the Kasto bandsaws means that we are able to stock a broader range of materials that closely match user requirements and cut them quickly for supply in short lead-times.”
Operations director Richard Bulmer adds: “Cutting with TCT blades was key to making this a reality. We tried using them on our older bandsaws but they were not rigid enough to cope. The band would squeal through the guides and excessive vibration wore the teeth out quickly. We were only able to cut 2 sq m of nickel alloy with a carbide blade, which was about the same as with a bimetal blade, but at three times the consumable cost.”
For further information
www.kasto.com