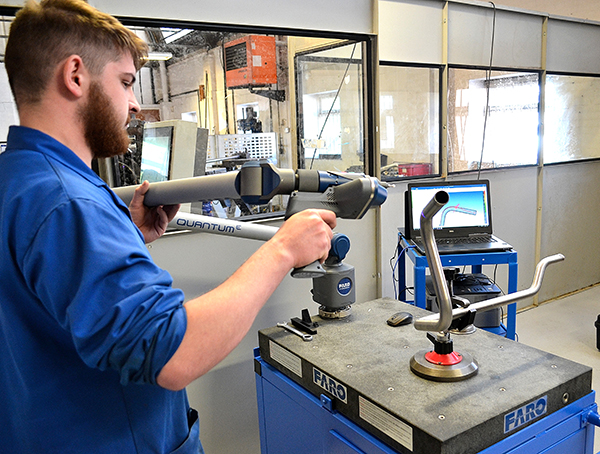 Daventry-based Alltube Engineering, a manufacturer of flexible and rigid pipeline products, has invested in a Faro Quantum E ScanArm. 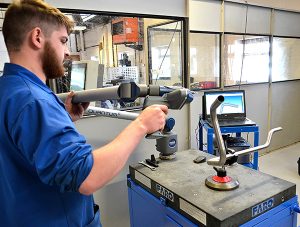 Technical director Paul Fuller says: “Achieving optimum 3D shapes is never easy as, for instance, a bend with a small angular error at one end of a long pipe can result in an inaccuracy of several millimetres at the opposite end. Hence, to satisfy the challenging briefs provided by our customers, designs often feature demanding 3D geometric forms with extremely tight dimensional and geometrical tolerances. To ensure that each hydraulic pipe adheres to the required design specification, we inspect all products before dispatch.”
As the use of physical measuring devices for inspecting rigid pipes is both cumbersome and long winded, Alltube recently investigated the latest non-contact measuring systems. A practical demonstration of a Faro Quantum E ScanArm fitted with FaroBlu Laser Line Probe SD, measuring a selection of the company’s most complex products, proved it was the answer to Alltube’s inspection problems.
“Not only was the Faro ScanArm much quicker and easier to use, it proved more accurate than our previous inspection methods,” says Fuller. “It was also able to link to our CNC pipe-bending machines, and automatically generate customer inspection reports. Last, but not least, the Quantum E FaroArm/FaroBlu LLP combination is capable of both contact and non-contact measurement. By using the ScanArm’s 3D laser-scanning capabilities, we’ve reduced our inspection times by approximately 90%, and by association, reduced our delivery times.”
For further information www.faro.com

Engineers, anaesthetists and surgeons from the University of Oxford and King’s College London are working in partnership to test prototypes of a rapidly deployable ventilator that can be manufactured using techniques and tools available in well-equipped university and SME workshops.

The team, led by Oxford professors Andrew Farmery, Mark Thompson and Alfonso Castrejon-Pita, and King’s College London’s Dr Federico Formenti, has been working to define novel mechanisms of operation that will meet the required specifications
for safe and reliable function. The design aims to exploit off-the-shelf components and equipment.
For further information https://oxvent.org/ 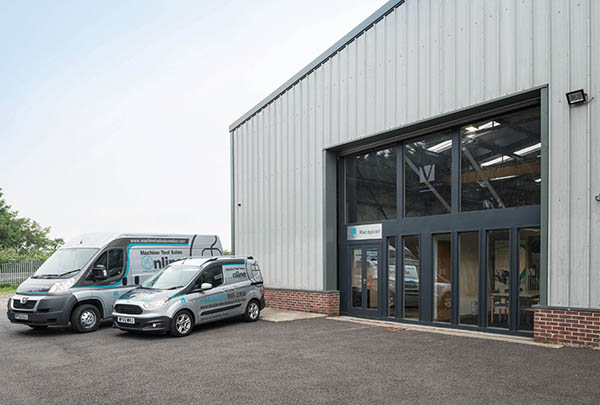 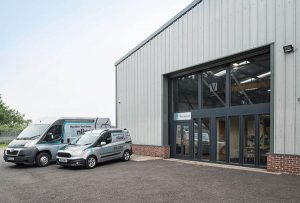 The idea is the brainchild of Vigilance CEO, Dave Andrew, who says: “We have over £1m of quality used machines in stock at our Bristol facility. These machines can provide a real lifeline to companies who either need to ramp up their production and distribution of NHS ventilators and associated equipment, or who have transformed their existing production operations to manufacture much needed medical equipment.” Companies that want to find out more about MTSO’s offer, and the range of used CNC and manual machines available should, in the first instance, call 0117 965 2706.
For further information www.machinetoolsalesonline.com 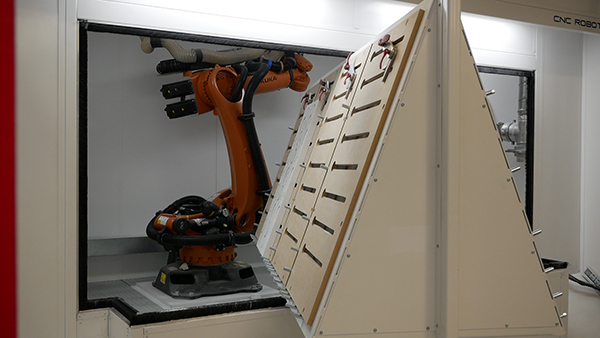 A company manufacturing industrial furnaces and ovens has switched from a flat-bed router to a robotic cell designed and developed by CNC Robotics Ltd. The cell uses a Kuka robot arm programmed with Alphacam CADCAM software and RoboDK to cut insulation material at speeds of up to eight times faster than before. 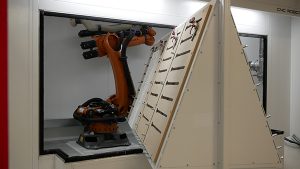 Carbolite Gero, based in Hope, Derbyshire, uses a variety of insulation materials like Kerform insulation board, refractory brick and ceramic materials to keep the temperature of its steel outer cases down to around 60°C, while the internal temperature peaks at 1200°C. The ovens and furnaces are used in a range of testing and heat-treatment processing facilities across sectors such as aerospace, general engineering, materials science, medical, bioscience, contract testing laboratories and universities, to see how products and liquids react in a heated environment.
The company was already using Alphacam to drive its three-axis Biesse router, but plant manager Nigel Holmes-Taylor says the Kerform board, along with other insulation materials, produces a highly abrasive dust when cut, which causes considerable wear on exposed parts of the CNC machine.
“We came across robotic arms with a routing attachment, and decided that was the path to take,” he says.
The company approached CNC Robotics, a UK-based robotics integration company that specialises in machining with robots. An important issue for Carbolite, though, was that it wanted to keep its Alphacam programs and integrate them into the robotic cell. No problem, said Nick Parry, systems engineer and technical lead with CNC Robotics, who led the development of the single enclosed robotic cell. 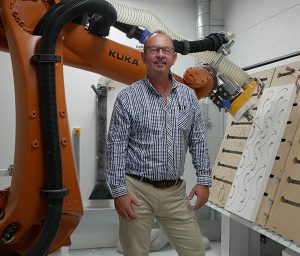 CNC Robotics founder and owner Jason Barker explains further: “When machining, we need to simulate the robot correctly to give raw data of where the robot goes, to check for potential crashes. Simulation is also vital for checking correct posture, singularity, wrist and elbow, and axis limits. The importance of ‘what you see is what you get’ is critical. If it crashes on screen it will crash in the real world. Using software such as Alphacam and RoboDK means you can correct all that before we go anywhere near the robot itself.
“And being able to convert the existing Alphacam programs that powered the router meant there was no downtime learning a new software,” he adds. “Carbolite was able to take their existing programs and redevelop them into the robotics world.”
Martin Measures, Alphacam area sales manager, explains how the simulation issue was overcome: “Tool paths created in Alphacam are passed directly to a RoboDK interface within the software, which simulates the robot kinematics. RoboDK is a specially configured software development kit (SDK) which outputs the co-ordinate cutting data to drive the robot. It means we can see exactly what the robot’s going to do before it processes the parts.”
And Holmes-Taylor says that because Carbolite’s new robotic cell can move at up to 2 m/sec, it provides a significant improvement over the company’s previous manufacturing process.
“Cutting speeds are far quicker on the robot than on the flat bed router,” he states. “While the router was restricted to working in three axes, the robot arm effectively has six axes, but can actually be infinite in the way it operates.”
His team takes the part files from drawings produced by the engineering facility, and imports them into Alphacam.
“This brings all the cutting paths together, and sends the program to the post processor, which is then fed into the RoboDK module for simulating the movement of the robotic arm,” says Holmes-Taylor. 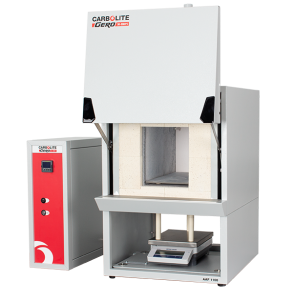 As the Kerform board comes in a variety of thicknesses and temperature grades, the robotic cell designed by CNC Robotics provides an additional benefit versus a flat-bed machine.
“Thanks to a special rotating table, we’ve now got four positions on both sides of the bed, which means we can cut several different types of board needed to produce a full unit, at the same time,” says Holmes-Taylor. “With the flat-bed router we could only deal with one type of board at a time, so this gives us a 4:1 ratio of cutting it quicker. In some circumstances it’s up to eight times faster.
“The rotating table that works this has a set angle at which the cutter hits the board, and Alphacam, in conjunction with RoboDK, ensures the robot keeps to that exact angle at all times, cutting in a straight line and at the correct depth,” he adds.

As the board has a high aluminium content, another improvement is that all the abrasive dust created during the cutting process is contained within the cell and drawn out through Carbolite’s extraction system, meaning the overall environment is much cleaner.
Finally, an added bonus, as Alphacam can produce a full description of what needs to be added to each specific site at the loading bay, CNC Robotics has been able to develop a piece of software that displays the PDF generated by Alphacam.
“This means that the operative loading the machine knows the next material to load, and where it has to go, saving even more time,”
says Holmes-Taylor.
The partnership between CNC Robotics, Alphacam, RoboDK and Kuka is an optimal solution for Carbolite, according to Kuka’s UK sales channel manager Tara Baker: “Kuka works with a system partner network. System partners like CNC Robotics provide even more industry-specific know-how. CNC Robotics designed and integrated everything into the enclosed cell, turning the robot into a highly effective CNC machine. Furthermore, Alphacam/RoboDK provides a back-up service for the software. It’s a one-stop solution for Carbolite, helping them to future-proof their business.”
For further information www.alphacam.com 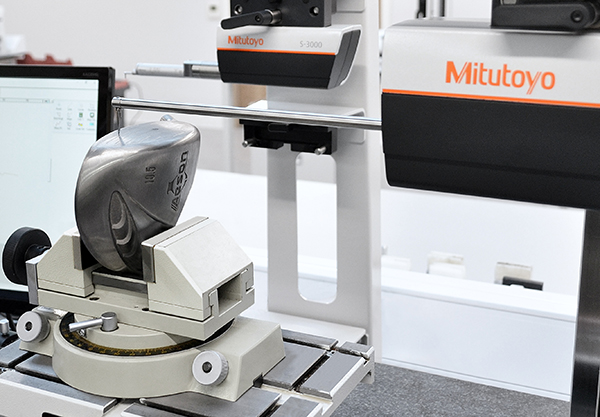 Many companies in the sporting and leisure industry are benefiting from the latest metrology equipment. A case in point can be seen at The R&A, situated close to the home of golf near St Andrews, which has taken delivery of a contour and surface roughness instrument from Mitutoyo to help it evaluate submissions of new equipment for conformance to the official rules of golf. 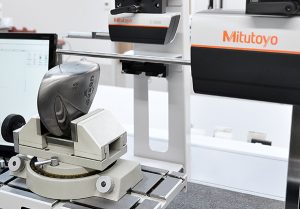 When it comes to golf clubs, the rules and specifications are divided into five separate categories: club (general), shaft, grip, club head and club face. Having used a previous-generation Mitutoyo Formtracer instrument for measuring the impact area markings on club faces for some years, the organisation recently took delivery of the newly launched Mitutoyo Formtracer Avant.
At The R&A, the Formtracer Avant is being used to precisely measure the profiles, widths, depths, edge radii and separation distances of the grooves located on the impact areas of club faces against the relevant specifications detailed in the rules. Surface finish is also inspected using the Formtracer Avant, which avoids the need to invest in two separate devices as it is able to convert from a surface roughness measuring instrument into a contour measuring device – and vice versa – within seconds.
Andrew Johnson, assistant director – research and testing at The R&A, says: “Each week we receive 30-40 submissions of new equipment for evaluation. Our Mitutoyo Formtracer has proven reliable, and provided the necessary levels of accuracy and ease-of-use. Replacing it with the new Avant model has ensured that we are able to keep pace with the high volumes of contour and surface roughness testing.”
For further information www.mitutoyo.co.uk