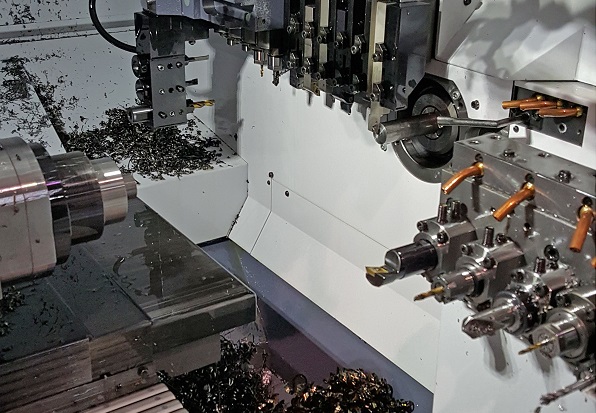 JC Precision Engineering earns 70% of its turnover from producing a range of components for racing go-carts. The business has grown progressively from the race track participation of the Munday family, led by father Vincent who set up the firm 36 years ago, and is now run on a day-to-day basis by his two sons Dan and Chris.
Production at the Market Overton factory in Rutland is steeped in CNC machining centres and fixed-head lathes for turning, into which around £1 million has been invested over the last five years, usually at a rate of one machine a year. However, around the family table, discussions have often broached the subject that perhaps the company should invest in CNC sliding-head technology for producing smaller precision parts.
“We used MACH 2016 as the final decider and ordered the Citizen Cincom L32-VIII with removable guide bush, which was installed in July 2016,” says director Dan Munday. “Almost immediately we wondered why we had debated so long. Indeed, such has been the success of the machine that we are now planning for a second because we are becoming increasingly concerned we could run out of capacity.” 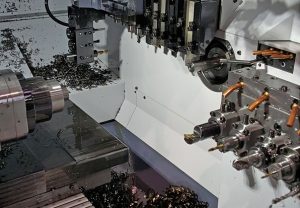 Since July, apart from more effectively switching work from other machines, the firm has won new contracts that it could never have dreamed of fulfilling before. The directors have already noted how not only profitability has increased, but also throughput, with cycles being clocked two-thirds faster than before. For example one part taking more than 50 seconds on a fixed-head machine is now produced in
just 17 seconds.
However, most important to the company is that lead times are being decimated against previous methods, which involved separate fixed-head turning and often further milling and drilling set-ups, as well as manual finishing. Indeed, benefits are also being accrued from the ability to achieve total consistency, enabling ‘through-the-night’ running and the maintenance of tolerances as tight as 10 µm when needed.
As a result, previous production methods involving four or five set ups have been reduced to one, including in-cycle deburring. Batches as small as 20 have proven to be economical, especially when planned alongside other work, with the machine already either set with or without the guide bush in place or having no need for a bar change. This economic capability for small quantities has also encouraged design input for certain key customers, as well as development and providing a prototype service.

In ordering the Cincom L32-VIII, the company elected to specify the detachable guide bush.
“We have considerable demands for special sizes of short length parts, such as spacers and even washers, where we can save on bar end material,” says Munday. “It takes less than 30 minutes to change over to a guide bush when needed.”
One of the concerns holding back the venture into CNC sliding-head technology was the different approach to the application when compared with more traditional CNC turning.
“We had excellent support from Citizen, which quickly convinced us how our worries were totally unfounded,” says Munday. “What makes things easier is the Cincom control software, plus Citizen’s AlKart CNC wizard programming aid, which certainly helped us to get up to speed very quickly.” 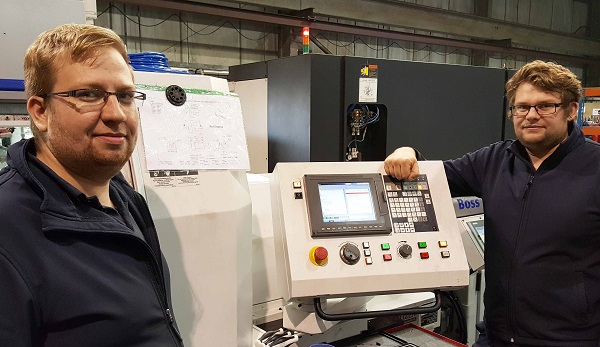 He describes how the company is running a range of parts in materials such as EN24, 316 stainless steel, plastics, aluminium and brass. These include special bolts and pins, master cylinder brake pistons, brass fuel fittings and stub axles. Indeed, a further point of disbelief in the capability of sliding-head machining has also been dispelled in producing the stub axle from 31 mm diameter EN8. In a single cut of 7 mm, the part was taken down to 17 mm diameter and held to a 0.025 mm tolerance. The part was then threaded each end from the main and sub-spindle and, within the cycle, a hexagon was milled adjacent to a flange.
JC Precision Engineering, which employs 15 people, acquired its premises in 2000 with a floor area of 1000 sq m – the company is currently planning to add another building on the site. This will enable the firm to meet future demands and install a second Citizen, helping to increase turnover from the current £1 million.
“The whole business has always maintained a steady growth, and with the input into design, development and prototype activities, although this takes up valuable production time, it is paying massive dividends in customer loyalty and a longer term order book.”
The Cincom L32-VIII has five axes with a 40 tool capacity of which 15 can be driven. A maximum speed of 8000 rpm is available on the 7.5 kW main and 3.7 kW sub-spindle. Driven tools are powered by a 1 kW, 6000 rpm motor. Of major importance, which is proving to be a key factor in the firm’s applications, is the ease of removal or replacement of the guide bush assembly from the main spindle to accommodate the machining of greater numbers of shorter parts from a bar.
For further information
www.citizenmachinery.co.uk

DMG Mori has introduced a mobile robotic cell to automate its CNC turning centres. Called Robo2Go, both raw billet loading and finished part unloading are performed automatically. The unit can be relocated easily by pallet truck to serve up to four different lathes sequentially on a shop floor. 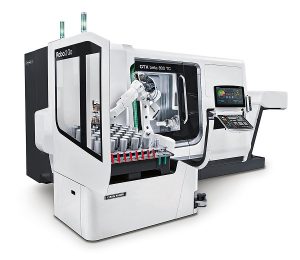 Operation requires no specialist knowledge of robots, as graphics-based programming is offered via an app running directly in DMG Mori’s CELOS control interface. All the operator has to do is enter the dimensions of the workpiece, select the chuck and gripper, choose one of the pre-defined workpiece tray arrangements and start the automatic process.
“As no expert knowledge is needed, this intuitive way of programming a robot is especially suitable for small and medium-sized enterprises that want to exploit the competitive advantage of flexible, unattended production,” says Silvio Krüger, CEO of DMG Mori Systems. “Reluctance to automate has been noticeable in this customer segment because of insufficient programming knowledge and uncertainty that the robot would be fully utilised. These factors have caused some to regard such an investment as too risky, but the simplicity of Robo2Go has overcome this obstacle.”
Once the system is working, a laser scanner prevents the operator from approaching the machine or robot, so there is no need for physical guarding. If a person encroaches on the periphery of the defined safety area, robot motion slows, while close approach halts movement instantly.
The robot is available with a maximum load capacity of 10, 20 or 35 kg. Workpiece diameter can be between 25 and 125 mm, with length from 50 to 250 mm.
For further information
www.dmgmori.com

Index has launched a second eight-spindle CNC automatic lathe capable of turn-milling components from bar up to 40 mm diameter. The new Index MS40-8 is available in the UK and Ireland through Geo Kingsbury Machine Tools, and follows the manufacturer’s first eight-spindle multi, with a bar capacity of 24mm, which was introduced in 2011.
CNC multi-spindle automatics normally have six spindles. The two additional stations facilitate the complete manufacture of components of even higher complexity, in short cycle times. Alternatively, simpler parts can be produced in half the time using the machine as a double four-spindle auto; indexing the drum by 90deg each time instead of 45deg to produce two parts per cycle. 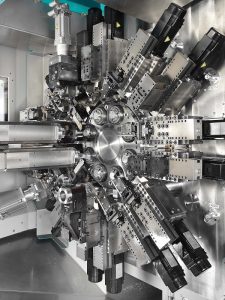 The MS40-8, which is also capable of chucking cast, forged or extruded parts up to 80 mm in diameter, is aimed at high-volume production in the automotive, connector and aerospace industries. However, smaller batches can be produced almost as efficiently and economically as larger runs due to the speed of set-up inherent with CNC rather than cam technology. In addition to turning, cycles may include drilling, elliptical deburring of cross holes, milling, hobbing, tooth milling, deep-hole drilling and slotting.
Up to 18 CNC cross slides (X and Z) can be specified on the MS40-8, along with additional Y axes as an option. The low-mass slides with hydrostatic support are wear-free and avoid stick-slip. A low moment of inertia leads to dynamic movement for rapid acceleration, while high damping characteristics prevent the transfer of machining vibrations to the adjacent slide via the headstock, says the company.
For further information
www.geokingsbury.com

When Hi-Spec Precision Engineering Ltd needed a new centre lathe for its machine shop, the Rutland-based company quickly opted for the heavy-duty Colchester Magnum from 600 UK.
“The larger capacity end of the work we do, is also the lower quantity of our work,” says managing director Darren Grainger. “We have all the latest CNC machine tool technology, but with the Colchester Magnum centre lathe we can just hop on the machine, do a quick turnaround job and get it out the door in the time that many CNC jobs would take to set. 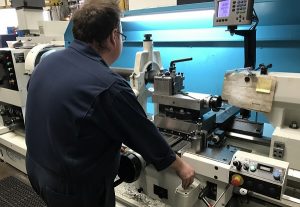 “The Colchester Magnum also has the largest diameter-to-length ratio of all our machines, and will take the heaviest parts,” he adds. “There are some jobs that come through the door which have to go on the Magnum centre lathe as they wouldn’t fit on our other machines, and we just couldn’t take these jobs otherwise.
“We originally had another machine in the place, but we weren’t happy with our purchase so we replaced it with the Magnum. When making the purchase, we already had a number of 600 UK machines and we didn’t want to buy a Chinese product, as we had been down that route before.”
Referring to the machine specification, Grainger continues: “Whilst I have gone for a machine with an 800 mm swing over the 660 mm variant, the bed is wider and the machine is heavier than any other in its class.”
For further information
www.600uk.com

Three turning machines supplied by TW Ward CNC Machinery (Ward CNC) are playing a key role at Sheffield-based Cosmopolitan Engineering, where they enable the company to consistently meet customer demands. Installed progressively, the trio of Hyundai-Wia turning machines – an L400LMC lathe with C axis and driven tools,
an SKT-300 turning centre and a L300C two-axis lathe – have enabled the firm to produce parts as one-offs or in small batches of up to 10. However, one particular ongoing contract for the volume machining of a family of axles demonstrates how the Ward CNC-supplied machines combine to good effect. 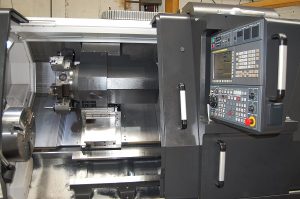 Produced from EN24T billets, the axles range in size from 100 to 120 mm diameter, and from 290 to 937 mm long. All sizes are turned to diameter then, on the shortest version, a grease nipple hole is drilled and a 16 mm wide by 20 mm deep cross slot is machined by the SKT-300. On the larger sizes, which are machined on the 2 m bed L400LMC on C axis and driven tools, a screw thread is generated.
Mark Leonard, who has been production manager at the company for over two decades, says the machines have never let Cosmopolitan Engineering down.
“We have been dealing with Ward CNC for many years, working with the applications engineering department to machine/manufacture items such as tool posts, to accompany new machine sales. Importantly, the Hyundai-Wia machines are all powerful, geared headstock machines – with a 22 kW spindle motor on the L300C, 26 kW on the SKT-300 and 30 kW on the L400LMC.”
For further information
www.wardcnc.com