Creaform, a specialist in 3D measurement solutions, says that its Canada-based headquarters has received the ISO/IEC 17025:2005 accreditation from the American Association for Laboratory Accreditation (A2LA). The ISO/IEC 17025:2005 accreditation is an internationally recognised standard for testing and calibration. Laboratories accredited as per the ISO/IEC 17025 standard have demonstrated technical competencies relating to the calibration of their technologies. Creaform also follows the ASME B89.4.22 standard for its acceptance testing and holds
an ISO 9001:2008 certification for its quality management system.
For further information
www.creaform3d.com

The Manufacturing Technology Centre (MTC) has become the UK’s first centre to install HP’s latest 3D printer, the Jet Fusion 4200, which was supplied by Europac 3D. It is housed
in the MTC’s National Centre for Additive Manufacturing, which recently agreed a partnership to be the benchmarking centre for the European Space Agency. The MTC says that the HP Jet Fusion 4200 will be available to all companies interested in testing the technology and the capabilities of 3D printing, allowing them to explore the latest technologies and see what benefits additive manufacturing may bring.
For further information www.europac3d.com

Japanese machine tool manufacturer Makino says that orders from Europe were up by more than 70% in the last financial year, with major contributions from the aerospace and industrial components sectors. Particularly positive developments were seen in France, Italy, Spain and Poland. At a recent Makino press conference in Germany, the company reported global consolidated turnover of ¥153.6m, down 5.1% compared with the last financial year. Although in Japan the group suffered from a decline in turnover of 7.9%, record positive levels were achieved in all other regions (Americas up 10.3%, Europe up 8.5% and Asia – excluding Japan – up 4.2%).
For further information www.makino.co.jp

The annual Trumpf UK open house proved itself to be a real success in more ways than one. For instance, not only did the three-day event attract more than 200 people through its doors, but orders in excess of £2m were secured. Arguably the star of the show at this year’s event was the TruMatic 1000 Fibre, an entry-level combination machine. Featuring a compact footprint, this combination laser machine can be equipped with functionality that punches holes, bends flanges and forms threads.

Elsewhere at the open house, the high end of Trumpf’s laser-cutting capability was on show. For instance, the company’s flagship TruLaser 5030 Fibre with 8 kW resonator was being put through its full range of capabilities, including cutting stainless steel up to 40 mm thick. Open house visitors were also introduced to the new Trumpf touchdown nozzles on the TruLaser 5030, which can reduce gas consumption by up to 70%, while doubling processing speeds, says the company.
For further information www.uk.trumpf.com

Aerospace heat treatment and hard coatings specialist, Wallwork Cambridge, has just received its AS9100 Rev D certificate and in so doing become one the first few dozen UK companies to make the transition. All companies working within the aerospace sector must be in compliance with the revision by September 2018. Works manager Andy Fox says: “Preparing for the transition has been a massive effort by all the team, and especially by quality manager Adam Yates who joined us in Cambridge from the Bury site just six months before the audit.” 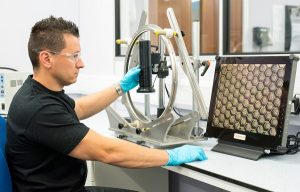 Site director, Simeon Collins, adds: “Aerospace orders are rising and it is vital that we continue to meet the necessarily stringent quality standards of the industry. Revision D includes additional requirements for product risk systems, traceability and mitigating counterfeit parts. Interestingly, it also extends into ethical sourcing and business context, taking it beyond quality and day-to-day management.”
For further information www.wallworkht.co.uk