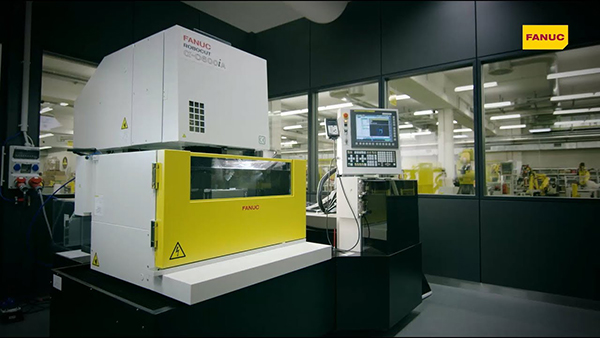 Developed for high-precision cutting tasks mandated by the medical, as well as the tool and mouldmaking industries, two models from the Robocut range of wire EDM machines from FANUC were fully operational on the company’s stand at the recent EMO 2019 exhibition. 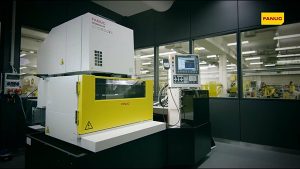 The smaller α-C400iB model was supported by a collaborative robot, complete with iRVision to identify components that need to be machined, while the larger α-C800iB machine was cutting aerospace parts.
Elsewhere on the stand, FANUC gave a full European debut to the company’s IIoT platform, which is called FIELD (FANUC Intelligent Edge Link and Drive). The FIELD system connects a broad range of FANUC and third-party production technologies – including both new and legacy models – to provide fast, centralised access to all production data within a factory; helping end users take a decisive step towards smart factory status.
Unlike other IIoT solutions, FIELD is ‘edge-heavy’, which allows data to be collected and processed at source on the shop floor, rather than in the cloud, thus giving the operators access to far more accurate real-time data and analytics, explains the company. FIELD is fully scalable across multiple cells within a factory, to allow manufacturers to make informed and intelligent decisions that can drive tangible improvements in productivity.
The FIELD system is compatible with a number of different applications, including those designed by third parties, such as software houses, system integrators and even end users. FANUC’s FIELD system app store will launch in Q4 2019.
For further information www.fanuc.eu 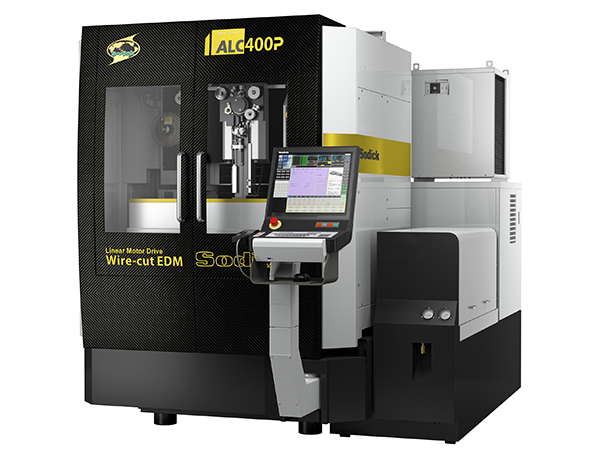 From its largest ever stand at EMO, Sodick said it took best-of-breed technology to the exhibition, with European debuts for the ACL400P high accuracy wire EDM and the ALC800G large-capacity premium wire machine. These newcomers were accompanied on the stand by two of Sodick’s most advanced EDM ‘big beasts’, the AG80L die sink and ALC800G wire machine, while automation options were demonstrated by the AG60L die sinker with robot. 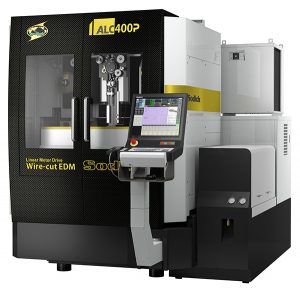 The new ALC400P ultra-high-precision wire EDM incorporates as standard an inverter-type dielectric chiller which monitors and maintains the dielectric temperature to within ±1°, minimising the thermal effect inside the work area. An additional thermal sensor is installed inside the work tank for even more accurate temperature control.
As a further benefit, the CNC controller incorporates 2D pitch compensating software which automatically compensates pitch error in positioning every square of 10 x 10 mm. In addition, cross-type roller guides help provide high rigidity, high accuracy and longer life.
Elsewhere on the stand was the new ALC800G large-capacity premium wire EDM, which becomes the largest standard machine in the range with its 1250 x 1020 mm work tank and maximum workpiece weight of 3000 kg.
Incorporating the latest digital innovations in generator technologies and the use of advanced electrode materials, the ALC range provides major advances in cutting speed, accuracy and surface finish – made possible through Sodick’s in-house development and manufacture of all critical technologies, including linear motors, discharge power supply, NC unit, motion controller and ceramics.
For further information www.sodick.org 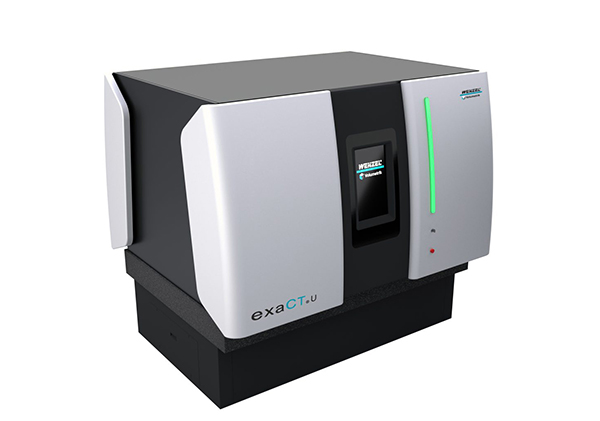 Wenzel will use Advanced Engineering to shine the spotlight on its exaCT U, which is designed for the measurement and testing of components where 3D data of complex internal and external structures are required. 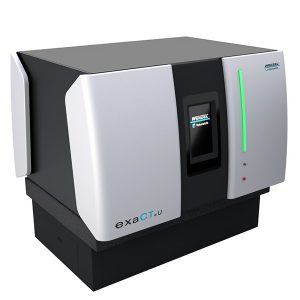 Available to view on stand D20, the exaCT U can be used universally and is designed in such a way that each customer can tailor its individual system with the appropriate X-ray source and detector. The measuring volume of the machine is specified as 700 mm high by 300 mm diameter.
For further information www.wenzel-group.com 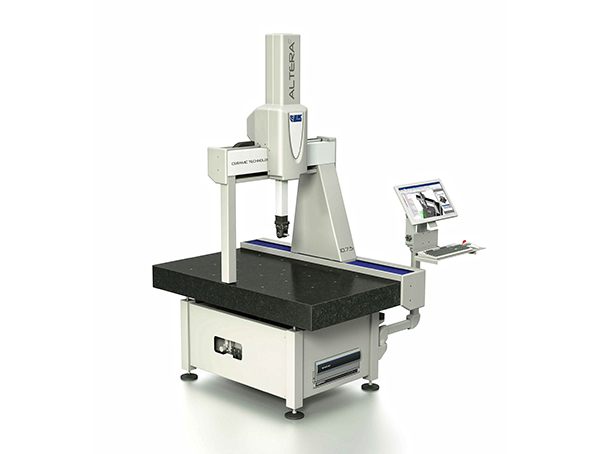 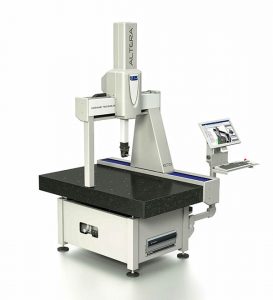 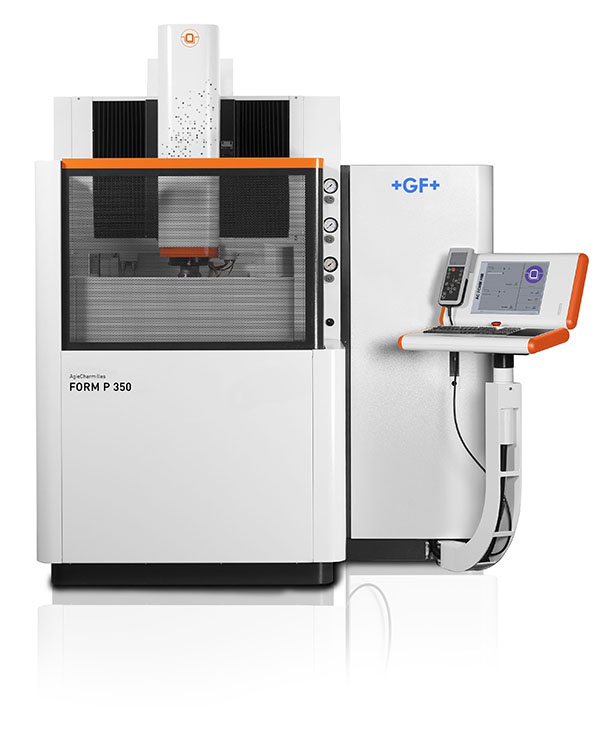 The Form P 350 die-sink EDMs from GF Machining Solutions feature precision-enhancing qualities and integrated technologies that are said to boost productivity and profitability. 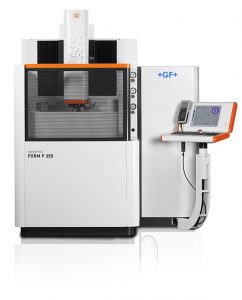 Featuring a compact C-axis construction, fixed table and cast-iron frame, offers stability and force reduction to maintain a precise spark gap between the part and electrode. Regardless of part weight or dielectric volume, the machines deliver consistently high accuracies and surface finishes of Ra 0.1. Furthermore, integrated glass scales preserve repeatability and eliminate the need for recalibration and errors due to backlash and wear.
GFMS Form P 350 machines are equipped with the company’s intelligent power generator and Tecform module, which optimises each pulse to reduce electrode wear and generate high-quality surface finishes. Segment-dedicated technology eliminates the need to adjust the generator’s parameters.
The company’s iQ technologies control the erosion of graphite and copper electrodes, and help reduce costs. Real-time spark characteristic analysis and setting adjustment for pulse efficiency ensure wear-free spark erosion, precision, efficiency and greater control over the cost of the electrode, says the company.
Of note, the console’s AC Form HMI is based on Windows. Interactive graphics illustrate operations such as measurement and machining cycles for ease of use, while providing descriptions of machining targets, automatic selection of optimal technologies and dynamic parameter adaption.
GFMS Form P 350 machines are supplied with a four-position linear tool changer for System 3R macro tooling. An optional rotary tool changer can be specified that increases the number of electrodes to 160. The machines can also be paired with a System 3R WorkPartner 1+ robot for unattended night and weekend operations.
Offering X-, Y- and Z-axis travels of 350 x 250 x 300 mm, the machine accommodates workpieces up to 700 x 460 x 275 mm in size.
For further information www.gfms.com/uk