The COVID-19 outbreak has led to “a significant resurgence” in interest in Mills CNC’s Smart Options machine-tool rental initiative among UK and Irish manufacturers.

Mills CNC, the exclusive distributor of Doosan machine tools in the UK and Ireland, has refreshed and relaunched the scheme in light of the current pandemic. The rental scheme, available on all new Doosan machines supplied from stock by the company, is administered and managed by Mills CNC Finance, its independently operated machine-tool finance arm.
For further information www.millscnc.co.uk 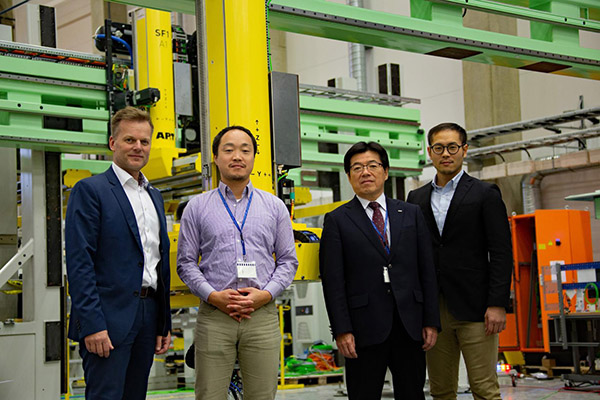 Earlier this year, the Japan-headquartered Unipres group, which supplies many of the world’s major automotive manufacturers with pressed car body parts, took delivery of two complete press hardening lines from AP&T. The first of the two lines began operations at Unipres’s UK manufacturing centre in Sunderland at the beginning of 2020, while the second line was delivered to the group’s French plant in Biache Saint Vaast in March. 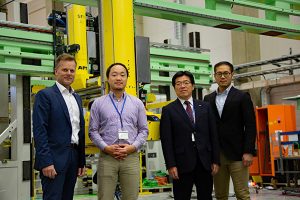 “AP&T’s reliable technology, extensive experience of press hardening and ability to provide quick service are some of the most important reasons underlying our decision to collaborate with them,” says senior vice president of the Unipres Advanced Engineering Development Centre, Ryoji Maeda.
AP&T technical sales manager Peter Robisch adds: “We were naturally delighted to be entrusted with producing complete solutions that meet Unipres’s high demands for short cycle times and extensive automation. Both of the lines have advanced technology. For example, all of the tooling and gripper changes are fully automated. The lines are also equipped with sophisticated press monitoring, which ensures a consistently high level of quality for the manufactured parts.”
AP&T’s business model – ‘One Responsible Partner’ – which entails the company taking full responsibility for all of the production equipment and having all of the required expertise in-house, also played an important role in the procurement. A further vital aspect was AP&T’s global operations, which allow the company to offer service and spare parts supply wherever customers operate.
To date, AP&T has delivered and installed over 120 press hardening lines all over the world.
For further information www.aptgroup.com 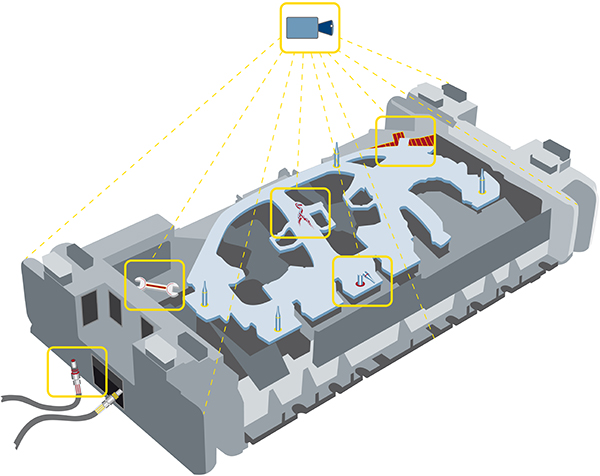 A system for die monitoring based on the latest camera technology has been developed by Schuler. With the help of these cameras, foreign bodies and other potential hazards can be detected before systems and parts become damaged. 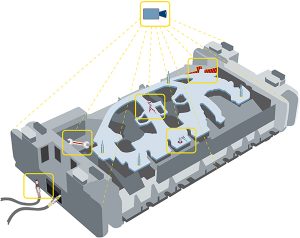 By way of example, a wrench left behind in the die is every press operator’s nightmare. When the machine starts up, damage to both the die and part being formed is inevitable. To address this problem, Schuler has developed ‘Visual Die Protection’, a camera-assisted monitoring system that can eliminate costly die repairs, downtime and even complete production stoppages.
With Visual Die Protection, not only do cameras detect the presence of foreign bodies such as wrenches or punch scraps, the system also checks whether the die is properly connected and verifies that the blanks have been correctly inserted, formed and removed. The system is equally able to recognise both cracks in the part itself and potential damage to the centring and ejector
pins. If any abnormalities are found, the press is stopped to prevent the situation from getting worse.
During operation, the cameras first create reference images of the relevant die before production begins. During this imaging process, operators mark critical areas that require particularly accurate monitoring, such as the centring and ejector pins. While the production process is running, artificial intelligence is used on a separate computer to perform a real-time comparison of current images with the original condition of the die, thus allowing an immediate response if any discrepancies are found.
For further information www.schulergroup.com 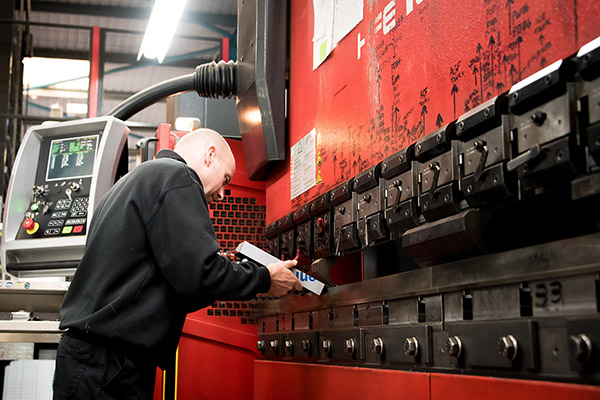 A Derby-based catering equipment specialist has adapted all of its manufacturing operations to produce vital healthcare equipment to support the fight against COVID-19. 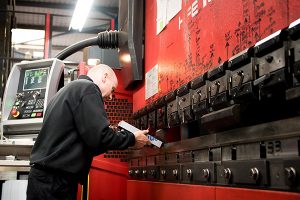 Parry, which employs 65 people, has responded to the national call to support key workers by increasing its output of stainless steel mobile wash basins, glove/mask dispensing units and knee-operated sinks. The company’s workforce and staff have been working non-stop to produce orders for the NHS Nightingale North West pop-up hospital in Manchester, as well as care homes, prisons and supermarkets.
For further information https://parry.co.uk/healthcare/ 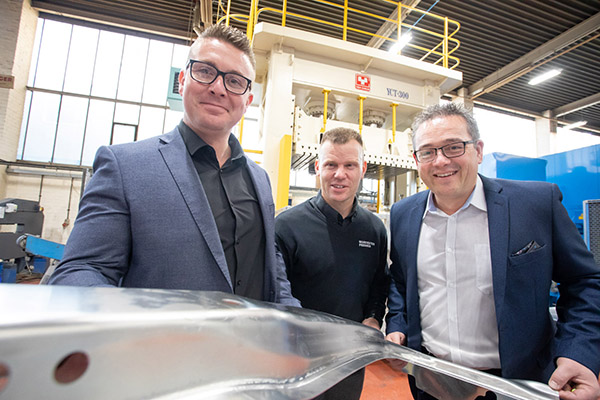 Black Country based Worcester Presses is celebrating 10 years of supplying hydraulic presses in the UK by hitting a major sales milestone. Worcester Presses, which employs 14 people at its works in Dudley, has recently installed its 50th hydraulic press into PAB (Coventry) to help cope with an increase in orders from the automotive and aerospace sectors. 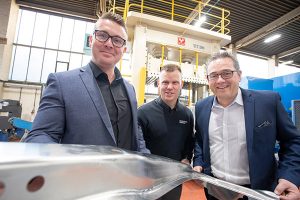 A Yeh Chiun 300 tonne H-frame hydraulic press has arrived at PAB (Coventry) that is capable of delivering the accuracy crucial in producing pressings and metal grills for supercars and a host of Aston Martin models. Praised for its flexibility and power, the machine’s relatively small footprint is a major benefit, while the latest control software means programs can be stored and recalled quickly.
“The YCT-300 Worcester hydraulic press is a great addition to our capability and is directly involved in the added-value work we complete for a number of car manufacturers and some sub-frame components for aerospace,” says Mark Brazier, CEO of PAB (Coventry).
The installation marks Worcester Presses’ best-ever year of hydraulic press sales, with this type of machine now accounting for 20% of the firm’s £2.2m turnover.
Brazier adds: “We’ve been very impressed with the machine’s versatility and the fact we can quickly set it up to take on new and diverse jobs. Tool life is also very good. We’ve been working with Worcester Presses since an engineering show five years ago and have always received great support, from understanding our desired application and then matching it to the right machine. The service and maintenance packages are also first class.”
For further information www.worcesterpresses.co.uk