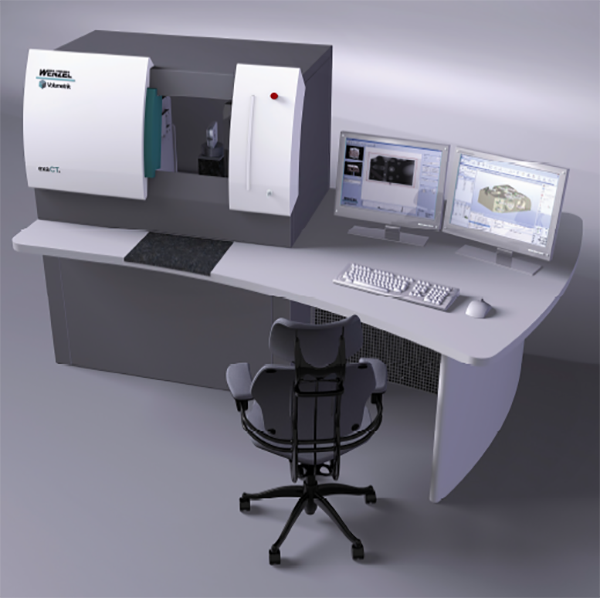 Wenzel has released a new CT scanner, the exaCT M, which is designed for measuring and testing small to medium-sized components.

The exaCT M was built around a workstation-concept. Its compact design with well thought-out ergonomics make it possible for this new CT scanner to combine more power and flexibility with less space requirements, says the company. In addition, the machine has an integrated evaluation unit that allows for easy loading and makes it suitable for automating measuring and testing processes.

With a measuring volume of 300 mm in height and 200 mm in diameter, the exaCT is particularly suited to use in the dimensional inspection and non-destructive testing (NDT) of components, assemblies and materials. The machine’s flexibility makes it applicable to a variety of other fields: dimensional control; wall thickness analysis; actual-to-nominal comparisons; tool and component optimisation; development and rapid prototyping; reverse engineering; material defect analysis; structural analyses; assembly tests; and joining technology testing.

Manchester Metrology Ltd is an official reseller of the Wenzel exaCT M. The company is a specialist metrology business offering subcontract engineering work and metrology equipment for hire or purchase. Typical sectors served include automotive, aerospace, power generation and medical. 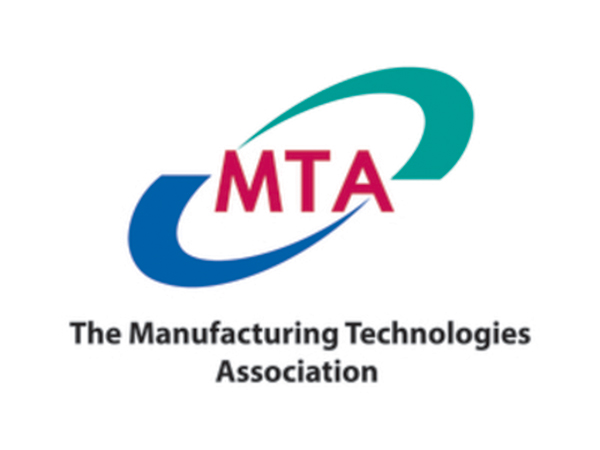 The Manufacturing Technologies Association (MTA) has urged the Chancellor of the Exchequer to consider bolstering the country’s manufacturing sector as it looks to make a speedy recovery from the impact of the COVID-19 pandemic.

Writing to Rishi Sunak, MTA CEO James Selka said failing to support such a vital sector of the economy threatened to stall progress on key national interest projects such as decarbonisation, high-speed rail (including HS2 and the Northern Powerhouse) and the new Tempest fighter aircraft. 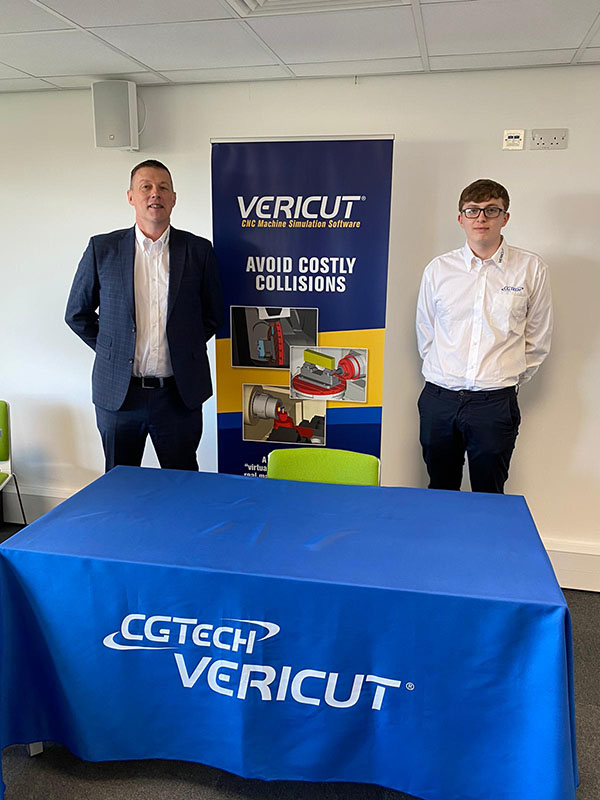 CGTech has appointed its first apprentice as part of the UK technical support team.

Will Culliford started his role as apprentice technical support engineer at the beginning of this month after initially completing a six-week work-experience placement last year. During his work experience, based at the CGTech office in Berkeley, Gloucestershire, Culliford completed all training courses and helped test the next Vericut release. As part of his apprenticeship he will be attending Gloucestershire Engineering Training College (GET) on a full-time basis for the first academic year. 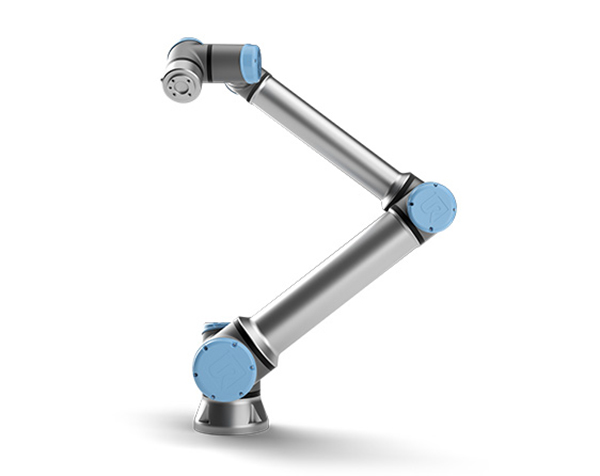 Universal Robots (UR) says that October will be its SME Automation month.

The whole month will be dedicated to helping SMEs take advantage of collaborative robots (cobots) to get their businesses back on track. New resources, leasing options and expert consultations will be made available to help users rebound from the challenges of COVID-19.

SMEs will also be able to join an expert webinar on Wednesday 7 October at 11:00 (BST), which is designed specifically to tackle the pain points faced by smaller businesses when adopting automation. 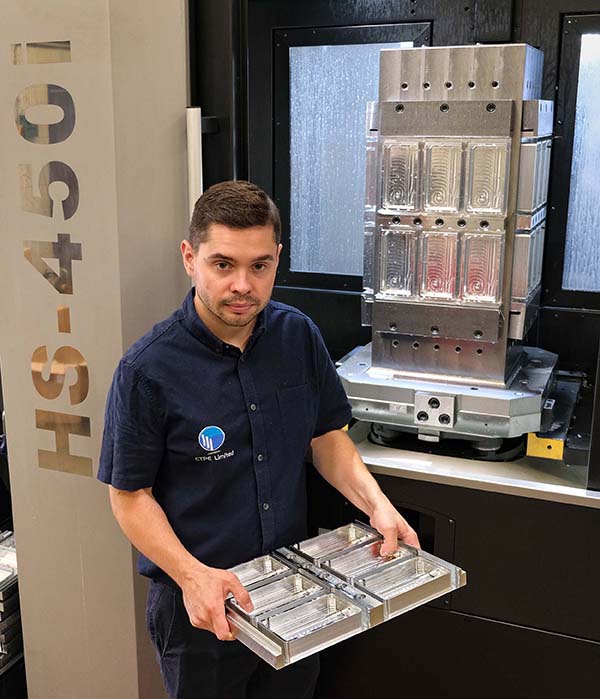 Established in 1989, Mildenhall-based subcontractor CTPE focuses on the medium to large volume production of high-precision components for the scientific, medical, electronics and defence sectors.

The company uses a number of three- to five-axis vertical machining centres, as well as fixed- and sliding-head CNC lathes.

To expand its prismatic machining capacity, in July 2020 CTPE invested in its first-ever horizontal machining centre, a four-axis Averex HS-450i with nominal half-metre cube working volume from Whitehouse Machine Tools, the sole sales agent for the Taiwanese HMC manufacturer in the UK and Ireland.

What prompted the purchase of the twin-pallet, 40-taper machine was an uplift from 150 to 350 per week of a particular 6061 aluminium, two-part enclosure. The enclosure is needed by CTPE’s largest customer, a medical sector OEM, for the production of critical care diagnostic equipment.

There is no problem completely machining the required quantity of covers three at a time in two hits on a Japanese-built Brother Speedio S1000X1 30-taper VMC, installed at Mildenhall last April by Whitehouse Machine Tools. Neither is there an issue completing Op2 on the matching housing using the same machine, which has now been fitted with an angle head to make the cycle even faster.
However, Op1 on the housing was proving too time-consuming on a three-axis VMC to meet the increased order level and was causing a permanent bottleneck, despite the running hours having been extended from 10 to 14 per day.

Alex Taylor, director of CTPE and son of the founder, Chris, decided that an HMC would best suit the higher production volume. The second pallet allows the next parts to be fixtured while the previous parts are being machined – automatic pallet change takes just five seconds. Dual augers remove chips that have fallen from a cube fixture, so there is no manual intervention except to empty the swarf bin after every couple of pallet changes. 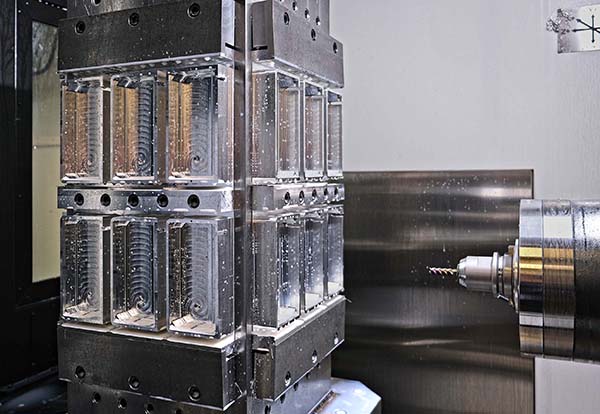 In contrast, the spindle on the fixed-table VMC was idle for 25 minutes after each cycle for accumulated swarf to be cleared and the next parts clamped for machining. A further problem was that the re-cutting of chips which collected within the component risked damaging the solid-carbide tools.

An HMC eliminates that difficulty and is more robustly built than a VMC so vibration is lower, meaning that cutters last longer. The most significant benefit, however, is that four aluminium billets can be fixtured on a cube for Op1, so 24 housings are machined in a cycle time of 160 minutes. Formerly, on the VMC, only two billets could be fixtured for machining a total of 12 components and the program ran for 135 minutes. The figures equate to a production time saving of 40%, considerably reducing manufacturing cost per part for this operation, particularly as there is now minimal operator intervention.

Three potential HMC suppliers were reviewed by Alex and Chris before they made their decision. The Averex machine was chosen as it offered high quality at an affordable price and, unusually, the possibility to retrofit a pallet pool that adds a further four pallets to the existing two, making a total of six. Its tool magazine is also extendable from 80 through 120 to 220 pockets. 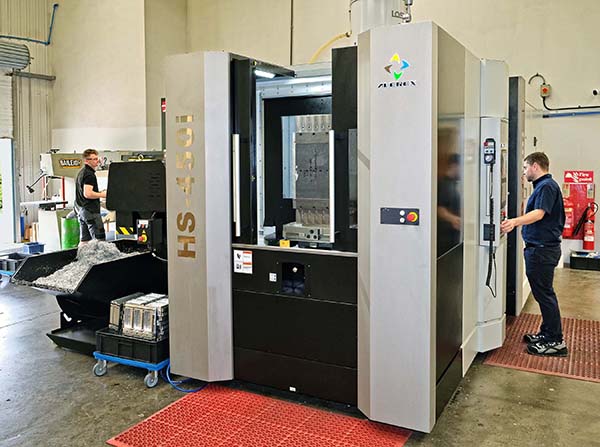 “The flexibility of being able to expand the machining cell on-site at an affordable price was very attractive,” says Alex. “We will almost certainly opt to do it in the next couple of years and take advantage of unattended machining to lower piece part cost when producing anything from large batches through small-lot multi-part runs to ones and twos. The other advantage of this route to automation is that it avoids the expense of buying another machine and saves space on the shop floor.

“We favoured the build quality of this 13-tonne machine,” he adds. “Although assembled in Taiwan, it includes thermal control of ball-screw nuts, thrust bearings, Y-axis servo mounting and spindle cartridge. The machine has hand-scraped surfaces for mounting the ball-screw bearing blocks and roller bearing slide ways, and it incorporates Japanese-made components, including the BIG Plus spindle, ball screws, heavy-duty roller guideways, rotary table and the tapered cones for pallet location.” 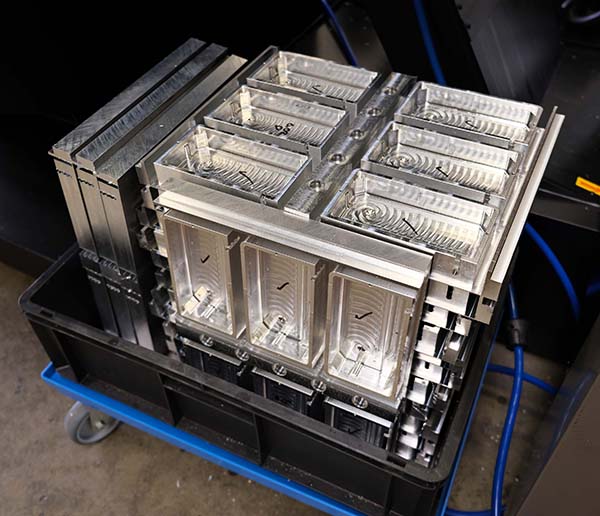 Whitehouse Machine Tools’ applications engineering department helped CTPE to configure the machine to suit the subcontractor’s requirements, including advising on the work holding and modifying and improving the Op1 part program that previously ran on the VMC. The HMC was therefore ready to enter full production within a few days of arrival.

In August 2020, the supplier was called upon again to convert the Op1 cover program from the Speedio to run on the Averex. This switch gives CTPE the flexibility to execute the first operation on both enclosure parts on the two HMC pallets respectively, while the customer’s call-off rate temporarily decreases before rising again in the winter.