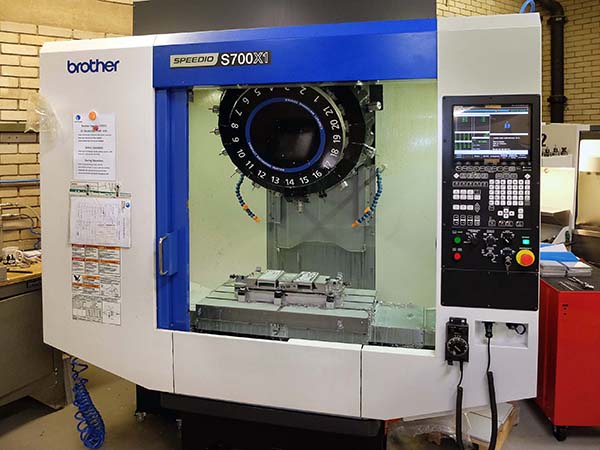 Even after extending the day shift, Mildenhall-based subcontractor CTPE was still having difficulty producing aluminium covers for a medical housing in two operations quickly enough on an ageing, 40-taper, three-axis machining centre after the customer raised the call-off rate to 100 per week. However, a new production route proposed by Whitehouse Machine Tools based on the supply of a Japanese-built 30-taper machining centre from Brother, also a three-axis model, promised a halving of the cycle time and consequent elimination of the problem. 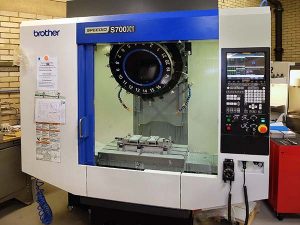 So, a Brother S700X1 was installed in August 2016. Whitehouse edited the existing program and, although it is still a two-operation job, the cycle time was indeed reduced by 50% to one hour, as had been demonstrated during time trials at the supplier’s Kenilworth technical centre and showroom.
The saving is principally a consequence of four times faster tool changes (at 1.4 seconds), a 16,000 rpm spindle with through-coolant rather than the 6000 rpm of the previous machine, four times faster acceleration (at 2 G) to linear rapids of 50 m/min instead of 18 m/min, and the fact that the program runs much faster in the latest Brother CNC C00 control.
Tool change time on the Brother S700X1 is minimised by optimising the operation of the magazine and improving the Z-axis acceleration, in addition to the shorter start and stop time of the spindle. Further reduction of waste time is achieved by positioning the X/Y and additional axes simultaneously with tool change operations.
Since the machine was installed, CTPE has gone a step further by optimising the program to machine six parts on the table with 14 tools, and adopting new types of cutters. The effect has been to reduce the cycle time per part further to just 30% of the original.
In another example to demonstrate the magnitude of the savings obtained, an aluminium flow housing for a customer in the scientific sector was previously produced in three operations on a three-axis machine in 15 minutes and is now produced in an Op1/Op2 cycle on an S700X1 in six minutes, representing a 60% time reduction. 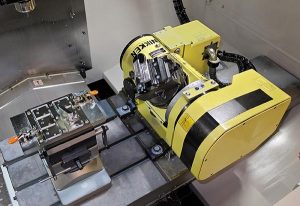 Alex Taylor, who runs the subcontracting firm with his father Chris, says: “It was our first machine from Brother and also our first 30-taper capacity. We were impressed with the quality, compact footprint and speed of the machine when we saw it in Kenilworth, and comments about Brother both online and by word-of-mouth were complimentary.
“After the S700X1 arrived, we were able to get one to two weeks ahead on the medical cover job, whereas before we were always struggling to keep up with the current week’s production,” he adds.
Such was the success of the project that, when a second multinational company in the medical sector, a long-standing CTPE customer, asked for a new family of 6061 aluminium parts to be produced, Chris and Alex Taylor had no hesitation returning to Whitehouse for an identical S700X1, this time fitted with a two-axis Nikken table. The machine replaced another three-axis vertical machining centre in June 2017.
Previously, the parts were being machined in the USA, but the German-based OEM wanted a single source of supply and was confident of the Suffolk subcontractor’s capabilities. Six components are required, half of which are suited to three-axis metalcutting, while the others benefit from five-face machining in two operations using 3+2-axis cycles, as otherwise they would need eight set-ups on a three-axis machine.
“We like the three-axis Brother and two-axis Nikken combination, as we are able to mount the compound table on one side, leaving the rest of the machine table free for fixturing a second component in a vice for three-axis machining,” says Chris Taylor. “In this way, we can get two-operation components off complete each time we open the doors.”
He adds that, in a similar price bracket the company looked at a number of 40-taper, five-axis replacements for CTPE’s old machining centre, but they could not compete with the speed of the 30-taper machine. The smallest cycle-time saving achieved to date by swapping an existing job on to an S700X1 is 40%. CTPE has also won new five-axis work as a result of having the capacity on the shop floor, and some of those jobs have already repeated. 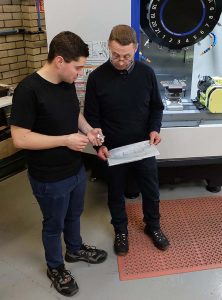 The Brother machines are especially appropriate for CTPE, which processes a lot of aluminium. One of the new medical parts is quite large for a 30-taper machine at 180 x 50 x 50 mm, but the Brothers cope with it well, despite more than three-quarters of the billet’s material being removed.
Precision is down to ±5 µm positional tolerance, better than is possible on many 40-taper machines. Chris Taylor points out that CTPE also produces components in steels, including stainless on the S700X1s, although a 30-taper machine would not be appropriate if doing that type of operation all day.
On a final note Alex Taylor says: “Before we bought the Brother machines, other users had commented on their reliability. Tooling suppliers, who tend to keep their ear to the ground, reported similarly. Certainly we have not had any downtime on either S700X1 since they were installed.”
For further information www.wmtcnc.com 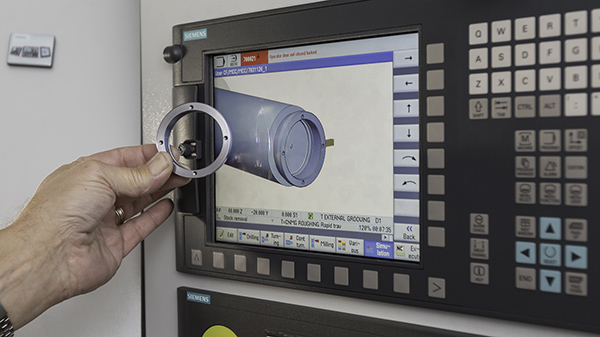 With an increasing volume of work, MCC Industries Ltd, along with its sister company Automotive Accessories Ltd, recognised the need for additional turning and milling capacity. As a consequence of limited space at their Southampton premises, managing director Mark Cox decided a mill-turn machine would be the obvious answer. In selecting the right machine, he laid out some key requirements: it had to be operator friendly, easy to set up and robust enough to maximise the capabilities of the latest cutting-tool technologies on a range of materials that included stainless steel. 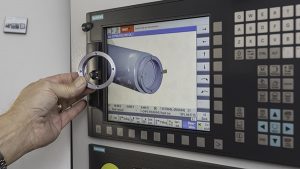 After meeting all of Cox’s criteria, the machine chosen to see MCC Industries enter the mill-turn arena, was the XYZ Compact Turn 65 LTY. The machine’s ease of use and its Siemens 828D ShopTurn control overcame one of the company’s main issues: the availability of skilled people.
“Skilled people can command too high a salary and often have some poorly conceived ideas on the best way to do things,” says Cox. “This isn’t always the best route for companies like ours, so we invest heavily in training people. To bridge any skills shortage, we need machines that are easy to set-up, without compromising the capability to do exactly what we need.”
The XYZ Compact Turn 65 LTY came out on top for a number of reasons; it has 65 mm through-spindle capacity coupled with live tooling, and 70 mm Y-axis travel. These features will enable production cycles to be maximised, allowing complex components to be manufactured on one machine in a single operation.
“Previously we would have to turn and then mill the parts on separate machines, whereas now they are coming off complete in a single operation, releasing milling capacities on other machines,” says Cox.
For further information www.xyzmachinetools.com 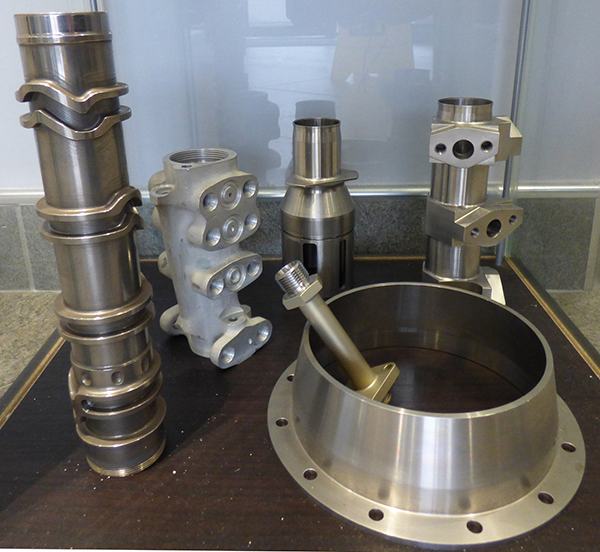 Reginson Engineering’s unequivocal need to use “quality machines to produce quality components” has seen a batch of six Hyundai Wia CNC lathes installed by Ward CNC to help the company meet the demands of an ever-increasing order book for aero-engine components. 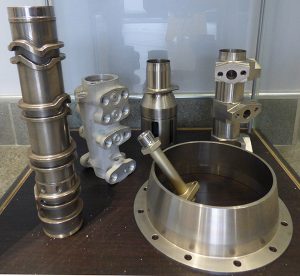 Steve Hatch, director of the Nuneaton-based subcontract machinist, also says that the extra capacity of the new machines was urgently needed, as was a very quick (three-week) delivery time.
The six turning machines (four two-axis L210A models and two E200s with C axis) were available from stock from Ward CNC, which also supplied four Hyundai Wia vertical machining centres at the same time. These new machines have joined a large portfolio of machines on Reginson’s 25,000 sq ft shop floor, which includes other Hyundai Wia turn-mill models (three SKT 100s and two SKT 200s) and Takisawa turning centres (four EX106 models, two EX108, one EX110 with live tooling, one EX310 and four EX308s with live tools).
Hatch says the new machines are being used to perform what he describes as “fairly straightforward” milling, drilling, boring and turning operations on a variety of workpieces, including elbows and T-pieces in materials such as stainless steel and Inconel.
“Workpiece complexity aside, we have to ensure that every component we produce is machined to the highest levels,” he says. “So, to ensure we have quality output, we must use quality machines.”
Supplying customers in the military, nuclear, motorsport, oil and gas, and rail industries, privately-owned Reginson Engineering quickly gained a strong reputation for machining after its establishment in 1995. Today it employs more than 80 staff.
For further information www.wardcnc.com 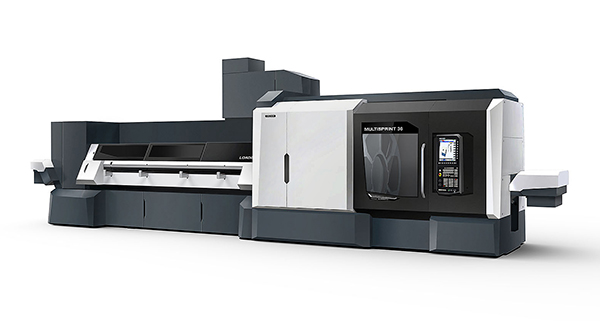 DMG Mori has combined the speed of multi-spindle automatic turn-milling with the versatility of sliding-head (Swiss-type) technology to launch two new machines with up to 41 CNC axes. The multis are manufactured at the group’s recently re-modernised Gildemeister Italiana factory in Brembate di Sopra. 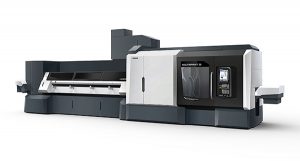 In a compact footprint of 21.9 sq m, which includes proprietary bar magazine and high-pressure coolant system, the MultiSprint 25 and MultiSprint 36 are capable of manufacturing components from bar up to 25 and 36 mm diameter respectively. The larger machine can also turn chuck parts up to 50 mm diameter, a process that can be automated by one or two robots in the working area.
Driven tools and a 100 mm Y axis on the cross slides at each of the six spindle positions allow complex workpieces to be machined complete with up to 28 standard tools, 24 of which may be driven. X-axis travel is 50 mm, while Z-axis travel is 100 mm, or 180 mm in combination with DMG Mori’s SwissType kit. Converting the lathes for long-part turning takes less than two hours. The maximum rotational speed of the spindles is 7500 rpm, while driven tools are rated at 13,800 rpm/14.2 Nm.
For rear machining, MultiSprint machines can be optionally equipped with a pick-up spindle or one or two counter spindles, allowing cycle-time reductions of up to 35% through one-hit production, says the company.
For further information www.dmgmori.com 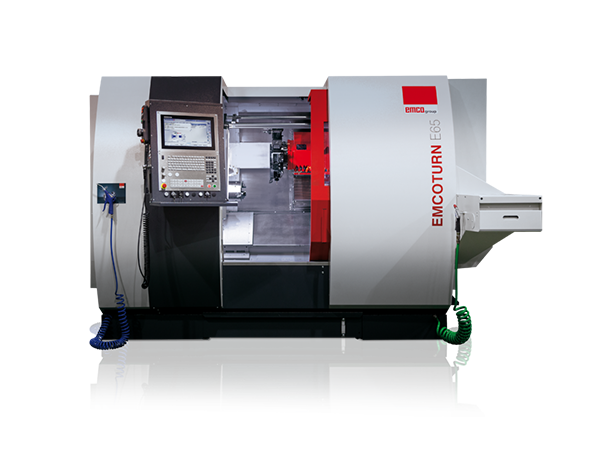 In order to cater for customers using Heidenhain controls in their production processes, Emco now offers its EmcoTurn E45 and EmcoTurn E65 turning machines with Heidenhain’s CNC Pilot 640 control. The new Heidenhain control completes the existing range of control systems, which includes Siemens and Fanuc, in the EmcoTurn machine range. 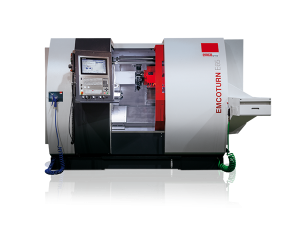 Advantages of the control with SmartTurn functionality include easy programmability and thus a short time from idea to finished component. Furthermore, the simple completion of forms, default settings for globally valid values, and selection options such as high-performance graphic support and simulation, guarantee quick and straightforward operation.
The redesigned SmartTurn user interface is based on the tried and tested Heidenhain-DIN Plus, simply because SmartTurn generates DIN Plus programs. As a result, both the NC programmer and machine operator are provided with important details while the program is running.
Thanks to its flexible design and versatile programming possibilities, CNC Pilot is designed to offer the right support, regardless of batch size or workpiece complexity. The CNC Pilot is said to be characterised by easy operation and programming, which is why only short instruction/training periods are required. Users benefit from graphical contour input and programming with SmartTurn. The project was realised in close co-operation with the Heidenhain development team in Traunreut and Hanover, Germany.
For further information www.emco-world.com