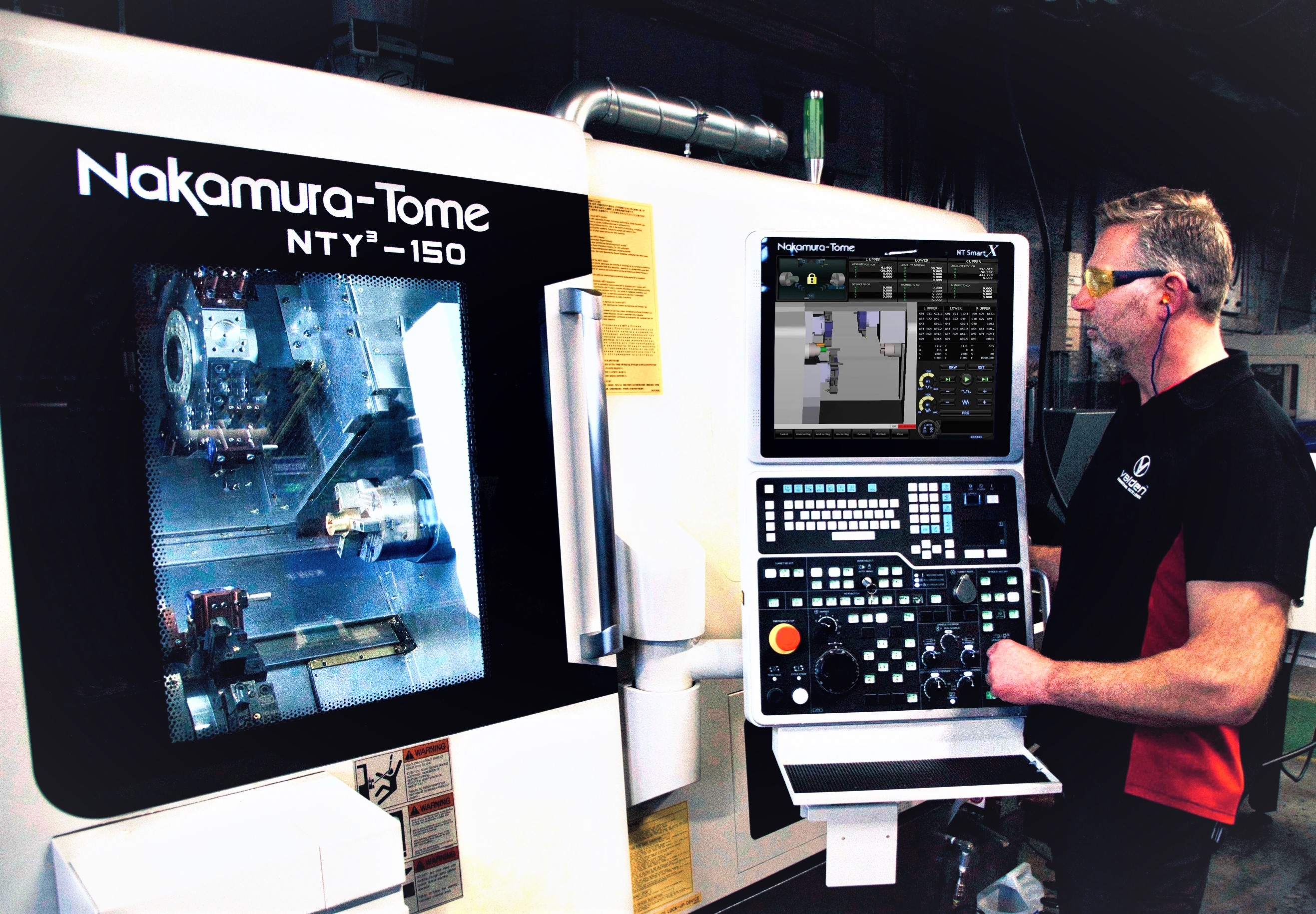 As part of its continued investment strategy, Velden Engineering has just taken delivery of a Nakamura-Tome NTY3-150 twin-spindle, three-turret turning centre from the Engineering Technology Group (ETG). The new addition will produce high-volume components beyond the size capacity of the company’s sliding-head turning centres.

Based in Bolton, Velden says it was the first UK job shop to achieve ISO9001 in 1987 and has since won a multitude of prestigious OEM contracts and awards. In 2012, the manufacturer acquired its first Nakamura-Tome turning centre, a compact WT100 twin-spindle, twin-turret machine.

The relationship with ETG blossomed and, in 2013, the company took delivery of a larger Nakamura-Tome WT150II twin-spindle, twin-turret turning centre with an upper turret Y axis after winning a new contract. Four years later, a second WT150II was planned to service an increase in demand, but with no machines available in European stock at that time, ETG loaned Velden an AS200. As it turns out, the Nakamura AS200 was perfect for certain lower volume projects with its fast set-up and programming. The result was Velden taking delivery of the second WT150II and purchasing the AS200 that had been loaned.

As part of its continuous improvement strategy, the company replaced its oldest Nakamura, the first WT100 machine that arrived almost a decade ago, with a brand new WT150II which arrived in November. The new Nakamura-Tome NTY3-150 has since followed.

“As three-turret machine, all with Y axes, the Nakamura NTY3-150 machine opens up a greater opportunity to do even more simultaneous machining,” explains Lee Valentine, plant manager at Velden. “On one specific part that we’ve transferred to the NTY3-150, we have seen a reduced cycle time of 40%.”
For further information www.engtechgroup.com 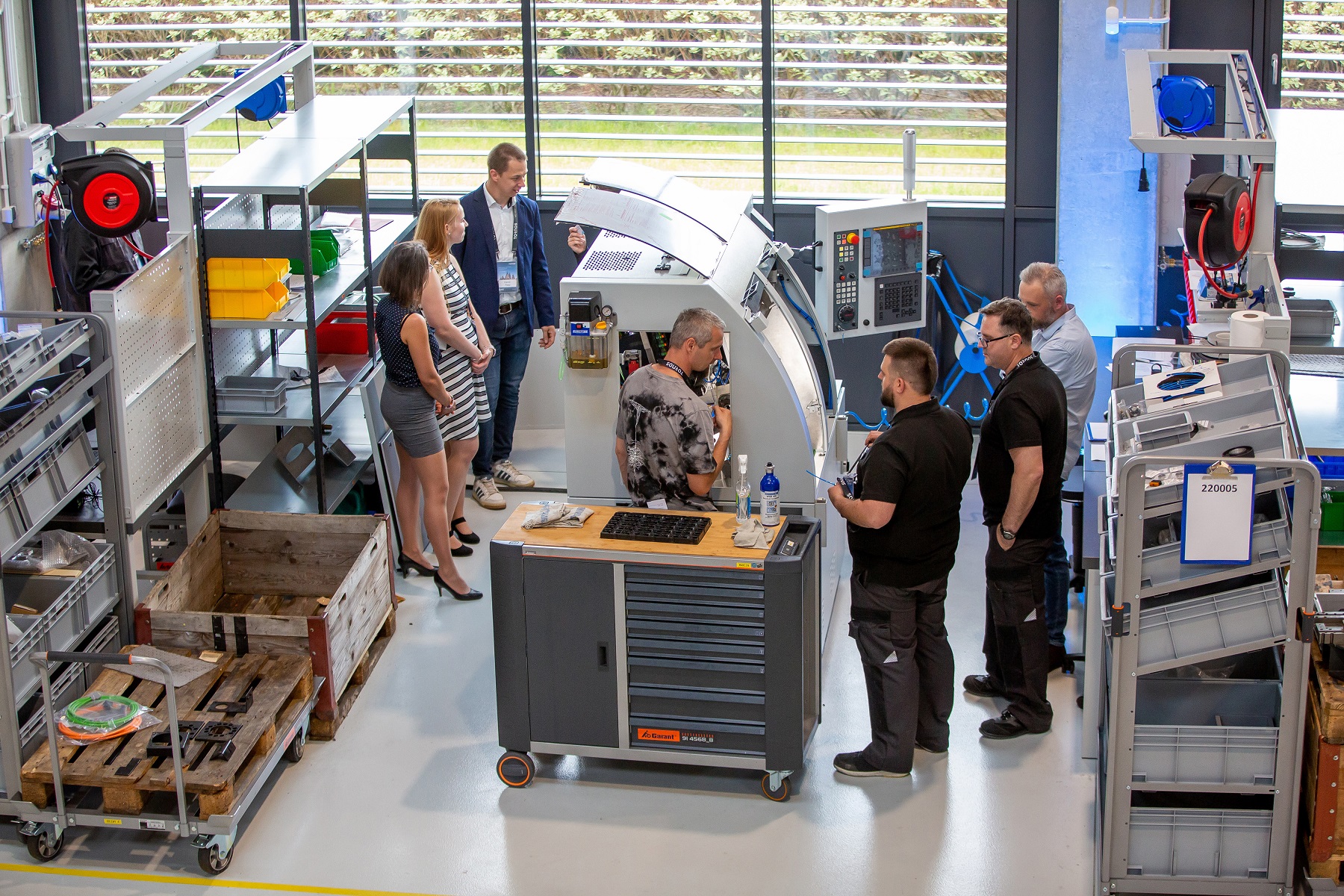 Tornos has opened its new factory in Kąty Wrocławskie, Poland. The factory was designed primarily to refurbish and modernise Tornos’ Deco 10, a flagship and best-selling bar-turning machine. By giving the Deco 10 new life as the Deco 10 Plus, Tornos highlights its heritage and know-how, while promoting the circular economy.

More than 200 invited guests took part in festivities marking the opening of the new factory in Kąty Wrocławskie. By establishing a permanent presence in Poland, Tornos is making more than a strategic choice. The new factory, located just a few minutes from Wroclaw, an important university centre, makes it easy to recruit highly competent research and innovation personnel.

The story of Tornos Poland began more than 10 years ago, with only two employees representing the brand on Polish soil. Today, Tornos Poland has more than 40 trained employees who know the machines inside out and are able to overhaul and repair them if necessary. Of course, service is about more than resolving technical issues and replacing machine parts. It includes the labour-intensive and important administrative work that Tornos’ new global Shared Services Centre is undertaking in Kąty Wrocławskie. Indeed, the Tornos Shared Services Centre provides these services to the benefit of Tornos sales companies and customers in Europe and, eventually, worldwide.

In Poland, Tornos executes its approach to industry’s circular economy. Since Tornos last year began offering its customers the opportunity to refurbish their Deco 10 machines by upgrading them to the Deco 10 Plus model in celebration of this iconic machine’s 25th anniversary, requests have been pouring in. So much so that Tornos Poland is set to expand even further in the coming months, offering staff the opportunity to train on the unique know-how of machine tool manufacturing and refurbishment.
For further information www.tornos.com 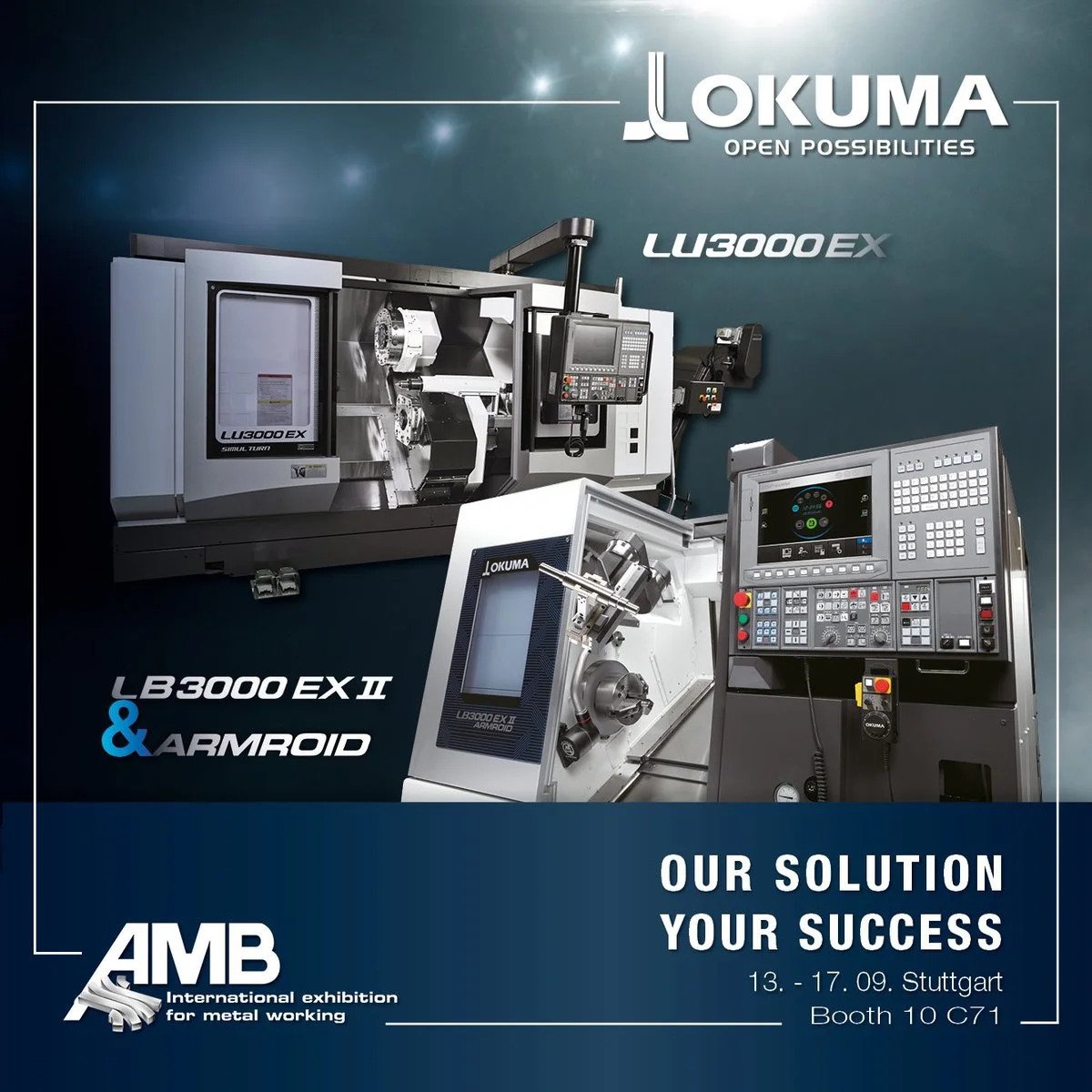 Okuma Deutschland GmbH, the German representative of CNC machine tool manufacturer Okuma Corporation Japan, is travelling with its metalworking technologies to AMB 2022 in Stuttgart on 13-17 September. Apart from the LU3000EX, an innovative machine tool for simultaneous four-axis turning, Okuma will show the proven LB3000 lathe, a machine that offers maximum automation in association with the Armroid jointed-arm robot.

Due to its heavy and robust construction, generously dimensioned flat-bed guides and high-torque drives, the LU3000EX is optimally suited for workpieces with a large L/D ratio, as well as for materials that are difficult to machine. Apart from that, the lathe shows its real advantage when using two turrets that work synchronously with double feed or simultaneously. As a result, users can reduce cutting times by up to 50%, reports Okuma, while times per piece and production costs can be cut significantly. This means that the investment in the second turret usually pays for itself after about six months.

With the LB3000 Armroid, Okuma will present a universal lathe with a fully integrated robot arm. This successful lathe is particularly suited to the production of universal turning parts and the complete machining of complex workpieces in small and medium batch sizes.

Combining it with the fully integrated Armroid jointed-arm robot enables automated operation, as the robot can load and unload the machine, and perform other important tasks. The user-friendly robot control with Okuma’s proven OSP control system automatically calculates the fastest collision-free path for the Armroid.
For further information http://amb-2022.okuma.eu 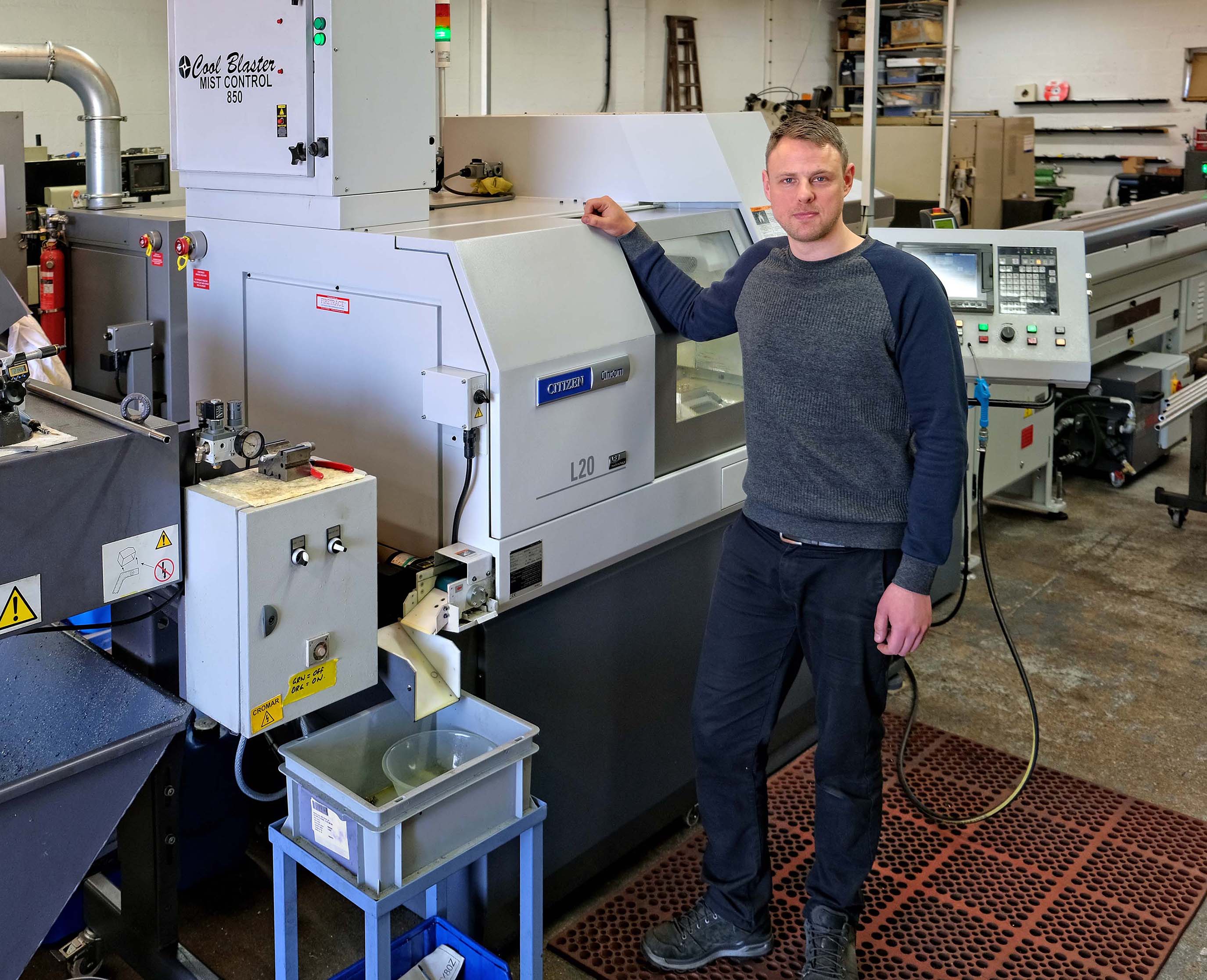 Tom Pearce started his own business, CIRC Manufacturing in Westbury, Wiltshire in 2016. Current CNC capacity at the company includes a vertical machining centre and two fixed-head lathes, all pre-owned, and three Citizen Cincom sliding-head lathes also purchased second-hand due to financial constraints during the start-up phase. His stated aim is to gravitate towards using more of the latter machines to produce complex, small to medium diameter, high added value components.

In 2019 Pearce bought a 1995-built Cincom L20-VII slider with a 3 m bar magazine sight-unseen for £4000 from a website and used his engineering skills to refurbish it himself. He did not feel sufficiently confident to commission it, so asked Citizen Machinery UK to align the bar feeder, bolt down the machine and check the axis movements. The company was very receptive and promptly sent in an engineer to complete the work.

A year later, Pearce again approached Citizen Machinery UK directly for a machine with C-axis spindles and higher speed driven tooling. The supplier offered a K16E-VII built in 2011, a 16 mm capacity slider that ticked the right boxes and is one of the fastest lathes that Citizen has ever manufactured.

A copper contact pin, a development part that was previously produced on the L20-VII, saw the cycle time fall threefold from 60 to 20 seconds using the K16E-VII. The contract has since expanded and the subcontractor is now producing a family of pins in long runs for a customer in the electrical industry.

In January 2022 Pearce bought a two-year-old Citizen Cincom L20-VIIILFV, again on the open market, and achieved another step change in productivity. The first job put on the machine was the production of 20,000 stainless steel gland nuts of 22.22 mm diameter for an electrical equipment manufacturer.
For further information www.citizenmachinery.co.uk 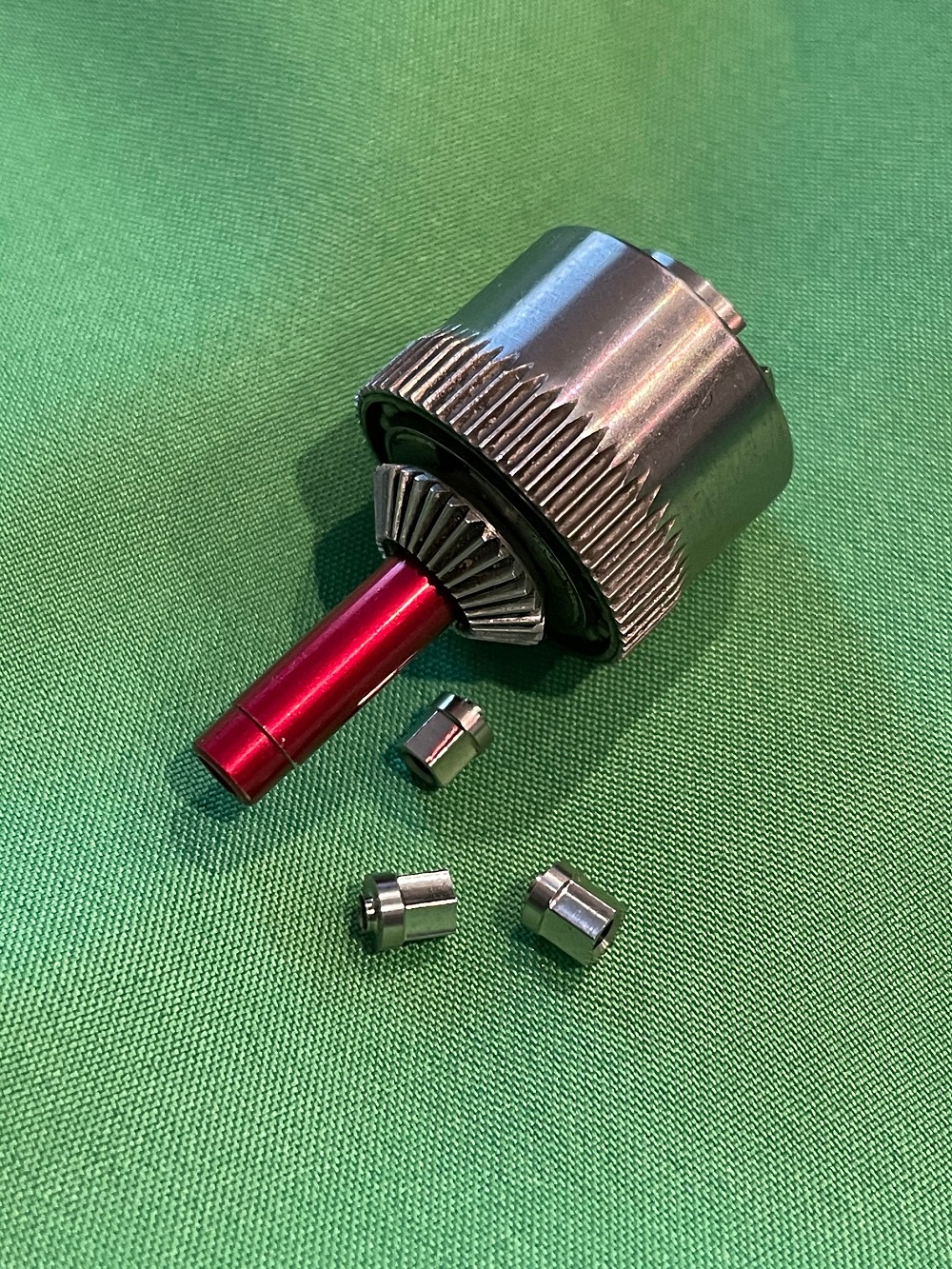 Amorphology, a NASA spin-off company, specialises in the application of advanced materials and manufacturing technologies for the improvement of non-lubricated micro-gears for robotics and other industrial applications. These materials have advanced features over steel, titanium and aluminium, for example.

Amorphous metals are a non-crystalline class of alloy that cut and chip differently than other materials and, in the company’s quest to source a machine that could produce the micro-gears, it conducted machining tests with several machine suppliers – including Starrag – to assess the precision, cycle times and overall capabilities of the machines as they cut a relatively unknown alloy.

After receiving CAD files of the prototype micro-gears and undertaking tests using a Starrag-developed cutting tool at the machine tool builder’s sites in Switzerland and the USA, several batches of samples were produced. Amorphology was impressed with the results and, in discussions with Starrag about how both companies could co-operate to grow their respective businesses, it was agreed that Amorphology would showcase the Bumotec in its Pasadena (California) site for the customers of both companies to view.

Amorphology is set to make a wide variety of parts on the machine, from mould inserts to prototype gears, as well as other production bulk metallic glasses and traditional metal parts.

“We are targeting high-precision parts with tolerances of often around ±5 µm on certain dimensions,” says Riley. “Most of our work is focused on rapid prototyping and batch production quantities in the region of hundreds of parts per month.”
For further information www.starrag.com