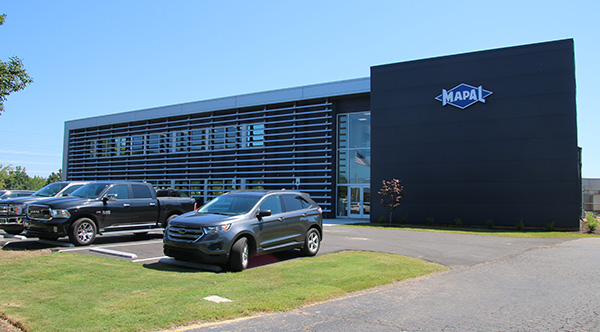 Cutting-tool manufacturer Mapal opened its Fountain Inn, South Carolina plant in 2013 to complement the company’s existing US headquarters in Port Huron, Michigan, as production manager John Schuck recalls: “In 2013, we were sweeping the floors and waiting for the first machines to arrive, one of which was a Vollmer QWD750H wire-erosion machine with a 12-station tool loader. Our immediate growth noted an additional two QWD750H machines arriving in spring 2015.

“From day-one, our ambition and plan for this facility was to run ‘lean and unmanned’ production wherever possible, and the 12-station Vollmer QWD750H wire-erosion machines have supported this philosophy,” he adds.
As the company ramped-up production, it exponentially increased its investment in wire-erosion technology. For instance, Mapal acquired more Vollmer machines in 2018. Succeeding the Vollmer QWD series as the next-generation technology, Mapal took delivery of two new Vpulse500 machines in March 2018.
“We were really pleased with the performance of the QWD750H models, but the new Vpulse500 takes it to a new level,” says Schuck. “Vpulse500 machines incorporate a new erosion generator that is far more efficient than the QWD models. The new erosion generator and the new control format are optimising our productivity, giving us 25-30% cycle time reductions over the previous machines, while generating improved surface and edge finishes. Furthermore, the CNC control and software has been enhanced for greater ease-of-use and operator friendliness.
“No doubt more Vollmer machines will follow as we continue to grow,” he adds. “From a staff perspective, part of our growth trajectory will see us start an apprenticeship programme this year and what better environment for apprentices to learn than in a new factory with state-of-the-art machine tool technology from Vollmer.”
For further information www.vollmer-group.com 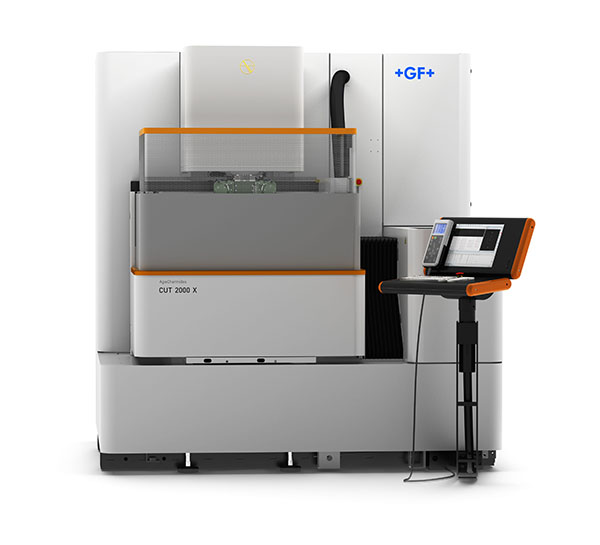 The AgieCharmilles CUT 2000 X wire EDM has been upgraded by GF Machining Solutions to feature the latest Spark Track technology and an IVU (integrated vision unit). 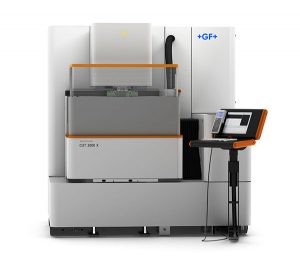 Spark Track technology, with its intelligent spark protection system (ISPS) that provides information about spark distribution on the wire, allows users to avoid wire breakage regardless of the machining conditions, as well as reduce part defects and simplify machine operation. Wire oscillation, varied heights and tapered surfaces are among the common problems resolved by Spark Track technology. To achieve optimum results, the discharge distribution along the wire must be as uniform as possible.
Using IVU Advance, operators can reduce set-up times, check reference points without a measuring machine and correct machining errors. A CCD camera reduces the need for an operator’s presence.
Having this on-board measurement system to analyse light intensity variation allows the detection of edges, which saves costs and facilitates closed-loop manufacturing. At the same time, multiple measurement systems are available for part control and set-up, along with automatic shutter and part-cleaning solutions.
The CUT 2000 X’s Vision 5 software interface allows manufacturers to optimise production, achieve flexible job management and improve quality and productivity, says the company. Furthermore, Vision 5 simplifies last-minute machining sequence modifications and allows for special actions to be introduced directly inside the job.
Another innovation is open guides on the automatic wire changer (AWC) that permit manufacturers to use a combination of different wire diameters between roughing and finishing, thereby reducing machining time for small and complex geometries, resulting in up to 32% more productivity. Additionally, two 25 kg wire spools are available that eliminate the need to modify the wire circuit when switching wires.
For further information www.gfms.com

A company making heater plates for medical ventilators, suddenly found its annual order of around 160,000 doubled immediately, as the coronavirus crisis took hold. HV Wooding has produced heater plates for ventilator humidification chambers since 2004, but in the fight against COVID-19, its customer, Intersurgical, increased the order substantially.

At the same time, the company was asked to prototype three components for the Ventilator Challenge UK consortium. The Hythe-based company’s experience in CNC laser cutting – programmed with Radan sheet-metal software – meant it was ready to join the battle to save lives.
“Radan meant we could quickly condense all the necessary up-front work, which would normally take at least a month, into just a few days, and we successfully manufactured and delivered 2000 sets of each of the three components in a very short time frame,” explains sales director Paul Allen. The parts had to be laser cut and formed, then fitted with inserts before being sent to the assembly line at Luton. Allen says Radan played a major role in meeting this challenge.
For further information www.radan.com 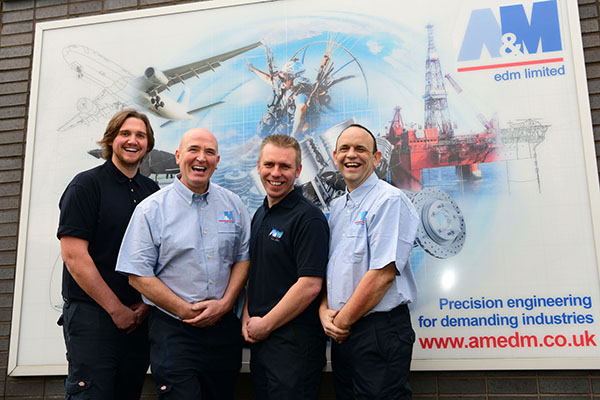 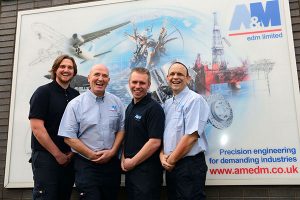 Manufacturing precision components and tooling for aerospace, automotive, manufacturing assembly and motorsport customers, the workforce at A&M EDM has doubled since 2013, to 70 staff, with annual sales of over £6m.
The company’s newly appointed directors will work with managing director Mark Wingfield on future strategy, and assume responsibility for day-to-day operations across the company’s two factories.
Watts and Finch are responsible for A&M’s spark and wire-erosion EDM output. A&M started business in 2002 as an EDM contact shop and now offers one of the largest commercial EDM services in the UK.
Surman and Talbot will lead A&M’s growing precision machining capabilities. The company currently has 29 CNC milling and turning machines that manufacture prototypes and production runs of components and tools.
“All four have made an invaluable contribution to A&M’s success as managers; they are all talented engineers who will ensure we continue to prosper and deliver quality components as fast as possible for our customers,” says Wingfield.
For further information www.amedm.co.uk

A steelmaker based in Poland is saving nearly €3m per year after switching to NSK´s sealed-clean KVS bearings in its roll mill.

Such has been the superior performance of these four-row tapered roller bearings that the company has adopted the solution for all of its tandem cold mills. NSK KVS bearings are said to offer 2-4 times longer life than standard bearings. There are many reasons behind this elevated level of performance. For instance, a special type of bore seal averts the build-up of negative pressure that can cause the entry of water through the main seals.
For further information www.nskeurope.com