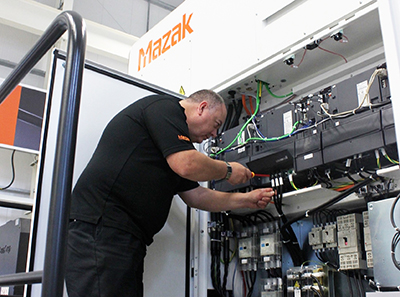 Yamazaki Mazak has invested further in its aftersales support with the announcement of eight new service engineers. This latest intake includes two additional in-house engineers, who will work to co-ordinate the daily activities of the field-based specialist team. Reducing the need for engineer call-outs where possible, the increased amount of in-house engineers will also ensure that customers have access to quick-response technical support over the phone, helping them get their machines back up and running as soon as possible.

The support team out in the field has also grown, with Mazak employing an additional member for both the install team and planned service team, as well as taking on four new engineers for the breakdown team. This growth is in line with Mazak’s goal to arrive at the site of a breakdown within 24 hours, regardless of geographical location, and get customer machines back into production within a 72-hour time frame. 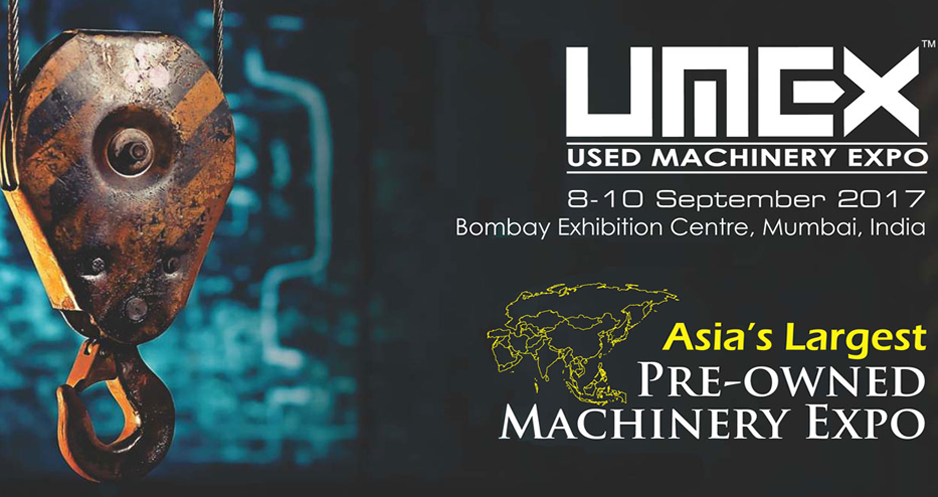 Taking place on 8-10 September, the 11th edition of Asia’s largest pre-owned machinery exhibition, UMEX, is set to get underway at the Bombay Exhibition Centre in Mumbai, India. In 2016, around 7100 visitors from 31 countries attended the event, along with over 350 exhibitors. Covering 14,000 sq m and supported by 16 trade associations, the event is organised in partnership by ITEI and MTI.

MTI will be handing out extra printed copies of its show issue to visitors from the company’s dedicated stand at UMEX. Indeed, the stand will be part of the MTI Pavilion, a now-familiar sight at exhibitions the world over. Among the companies confirmed on the pavilion include GCH Machinery (USA), Jansen Machinehandel (Netherlands), Gibbs Machinery (USA), Luthy Machines (Switzerland), Silini Press and Hammer (Italy), and Pressen Haas (Germany).
For further information www.umexonline.com
www.mtimagazine.com 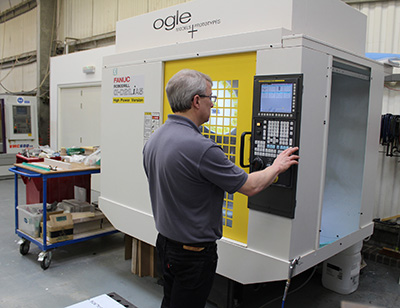 Established over 60 years ago, the reputation of Ogle Models & Prototypes can be recognised from its customer list down the decades. Manufacturing special projects for Bentley, Virgin Atlantic, GSK, JLR and Lamborghini to name a few, some of the company’s early work includes the Y-wing starfighter and Luke Skywalker’s land cruiser from the original Star Wars film in 1976.

Ogle Models & Prototypes wins prestigious projects through its skill set that includes expert model-making and hand crafting, which is mixed with modern technology such as industrial 3D printing, vacuum casting and CNC machining. To keep abreast of technology, the Letchworth-based company recently purchased a Fanuc Robodrill D21LiA5. Since installation, the Robodrill has proved to be an exceptional addition to the business.
“We bought the Robodrill because we are always on a quest to make things faster and with better quality, and what we currently have is a lot of other three-axis machines,” explains managing director Len Martin says. “These are basic machines and we wanted to move our business on and produce much higher quality parts at greater speed. It’s a drive for everyone to be more competitive and make parts quicker.”

As a business, Ogle Models only manufactures prototypes and small quantities, as Martin confirms: “We don’t do production runs, it’s all one-off and small quantity work. Therefore, you could say production time is less relevant and that it’s all down to programming. The new machine runs faster and produces a better finish than some of our existing machines, but even if we did have a small batch of 20-off, the Fanuc is at least twice as fast as our other machines. Added to this, the quality and accuracy is a huge factor.”
Primarily, the company processes model board on all of its CNC machine tools. However, the Fanuc Robodrill has been tasked with machining everything from model board through to plastic, aluminium and steel.
Heralding the productivity credentials of the Fanuc D21LiA5, Martin says: “We undertook a project to make aluminium paddles for a car, as the customer preferred the feel and look of a polished aluminium finish compared to plastic. We started by machining the job from solid aluminium billets on one of our older machines, but halfway through we took delivery of the Robodrill. We then transferred the job to the new machine, and by doing this, produced the paddles twice as fast with a far superior surface finish.”
When selecting the Fanuc machine, Ogle Models wanted the largest version available with a 4th-axis configuration. “We wanted the biggest possible work area as we knew we would lose some natural space with the 4th axis. I guess ultimately we wanted all the hallmarks of an extremely fast machine, but with a large bed. The machine certainly hasn’t disappointed; it’s been a really impressive addition.”

Commenting upon the acquisition of the machine at Ogle, Ian Taylor, model engineer, adds: “When I joined the company, it was a machine that I really wanted to work with, and I recommended it purely because of the large work envelope and small footprint. In addition, the Robodrill is very easy to use. As a company that conducts most of its programming off-line, the CNC control is extremely simple. I’ve used a number of control units down the years, and the Fanuc is by far the most user friendly. We have to set up the job and the tool off-sets, and this is very straightforward as the controller takes you through the process, making everything clear and easy.”
The BT30 Robodrill has a BBT spindle nose interface that provides high speed, power and rigidity with its face and taper configuration.
“We need this combination of attributes, as one day we could be machining a very soft material like model board or plastic, and the next day it could be aluminium, brass or even steel. I need a very big variety of options and the Robodrill doesn’t disappoint, especially with the speed control feature that gives me complete control when it comes to operations such as drilling or tapping, for instance.
“We often do long programs and run our machines unmanned overnight,” he continues. “It’s quite frequent that I will have a 16-hour machining job that will be set at the end of the shift to run lights-out. With the 850 x 410 mm table, I also have the facility to set up multiple, as a lot of the work we do is quite small. This means we can have a batch of parts produced overnight.”
The 21 tool position machine has a maximum spindle speed of 24,000 rpm and Ogle utilises this speed capability frequently.
“We regularly use 0.25 or 0.5 mm diameter cutting tools, and a lot of our more detailed work requires tools with a 0.1 mm diameter,” says Taylor. “We run these small tools for fine-detail features, such as graphics or engraving. With regards to machining at these high speeds, we have to run the tools at equally high feed rates. We have to remember that even though the tool is cutting, it is also rubbing against the part at the same time, so if I run the tool too slow it will get hot. To this end, we run at very high feeds to get the swarf out of the flutes and away from the part as quickly and efficiently as possible.”
Demonstrating these high speeds and feeds, Ogle recently manufactured a series of parts from polyurethane model board at 20,000 rpm with a feed of 8 m/min.
“This is as fast as we can run the Fanuc on detailed parts, as they have curved edges and intricate features, and means the machine has to decelerate and accelerate,” says Taylor. “In essence, the Fanuc Robodrill gives me everything I need from a machine; it’s extremely fast, reliable, powerful and precise. Furthermore, it has a large bed with a 4th axis capability, which means that we can machine a wide variety of parts at high speeds.”
For further information
www.fanuc.eu 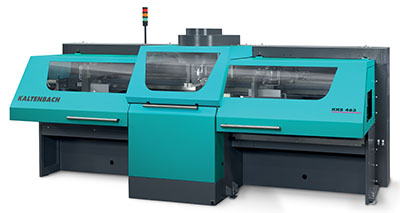 The KKS 463 NA circular saw features a 460 mm saw blade and can deliver ±60° automatic mitre cuts. Flat, angle and solid materials, as well as tubes and special profiles, can all be cut automatically. Further functionality includes the ability to provide multiple front and back cuts, while high quality cutting is aided by workpiece clamping on both sides of the saw blade and infinitely variable adjustment of the saw-blade feed, as well as contactless saw-blade return stroke. Electronic cutting-height adjustment and rapid reverse motion of the saw blade also feature.
Kaltenbach’s KKS 450 H is fitted with a 450 mm saw blade and can provide ±90° mitre cuts. Modern operation is facilitated via a control panel with plain-text display, offering clamping, sawing, reverse motion and opening at the touch of a button. The saw is suitable for single cuts and processing small batches, and there is good accessibility for saw-blade changes and maintenance work.
The KBS 400 DG has a capacity of 400 x 350 mm (w x h). Features include long blade life and high cutting quality due to an inclined saw band, while intelligent material measurement integrated into the clamping system boosts process reliability.
For further information
www.kaltenbach.com

Sawcraft UK has reported a record number of sales involving Cosen sawing machines. For instance, Wrekin Steels Ltd has taken delivery of its second Cosen G320 automatic bandsaw (pictured), which is cited by Sawcraft as the company’s top-selling model due to its output in relation to size and cost. Specifically designed for mass production cutting on material up to 320 mm diameter, bundle-cutting options are also available.

Elsewhere, Midlands-based Clarke Steels has ordered a second Cosen C-460NC to keep up with current production demands. The C-460NC is a fully automatic scissor-action bandsaw with a cutting capacity on round material of up to 460 mm diameter. A tilted saw bow is incorporated to reduce twist and maximise blade life. Smart NC 100 controls allow the machine to store up to 100 different cutting jobs, while automatic kerf loss compensation is a further feature.
Dyfed Steels Midlands Ltd is another company to invest in the Cosen C-520NC automatic bandsaw. The C-520NC also incorporates the latest Smart NC-100 technology. Operators can program up to 100 different jobs, including quantity and length of cut parameters.
At ContraCut, near Halifax, the UK’s first Cosen SVC-670DM vertical, semi-automatic, dual mitre-cutting Bandsaw has been installed. This saw was the obvious choice for ContraCut due to its large cutting capacity yet minimal floor space requirements.
For further information
www.sawcraft.co.uk