In 1992, Dublin-based Pressco Precision Engineering purchased its first Haas machine, a VF-0 vertical machining centre, followed by a VF-1 two years later. Both machines are still a regular part of the production process and continue to hold tolerance.

Today, Pressco is a global company supplying to some of the biggest life-science companies in the world. Around 40% of work is in the healthcare sector, with much going to mainland Europe and the USA. Aerospace makes up 25%, reaching as far as China and South America. Central to this growth is the company’s relationship with Haas, with the business currently operating 23 Haas machines. In 2015 Pressco invested in a VF-5SS Super Speed vertical machining centre, followed by a UMC-750SS Super Speed five-axis machining centre in February 2017.
“Multi-axis is the future,” says the company’s Stephen Hayes. “We’ve moved up the food chain of customers and are now considered tier 1 by our major clients. Using Haas machines has cut down our handling times and reduced costs, allowing us to be more competitive when quoting.
“The 15,000 rpm UMC-750SS has halved our cycle times,” he adds. “Its full simultaneous five-axis motion is perfect for cutting complex components for our healthcare customers. Moreover, the ability to cut five faces in a single set-up means we load once and the part is finished.
It cuts the labour right down.”
First attracted by the competitive price of Haas, Hayes says it is the high level of service that brings them back each time: “The machines are very reliable, but if there is an issue, the engineer and parts arrive next day.”
For further information www.haascnc.com 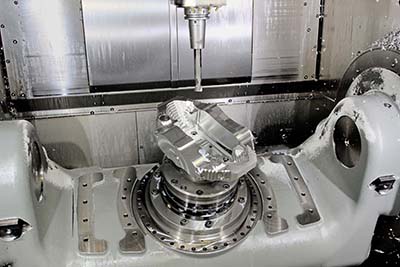 A second automated production cell has been installed at the Tamworth factory of Alcon Components to cope with worldwide demand for its monobloc brake calipers. The calipers are machined from aluminium or lithium billet for motorsport race cars and high-performance road cars, as well as from cast iron for military vehicles.

Similar to the original automated system installed in February 2007, the latest configuration is based on a bigger Hermle five-axis vertical machining centre, a model C32U with 650 x 650 x 500 mm axis travels, reflecting the fact that brake calipers have become larger over the past decade. Supplied by Geo Kingsbury, UK agent for the German machine manufacturer, the C32U has been equipped with an Erowa Robot Easy that stores 12, 210 mm diameter pallets, which are transferred to and from the working area by a horizontally travelling load/unload arm.
As on the previous Hermle C20U, the latest five-axis machine is equipped with Blum laser tool-breakage monitoring and length setting, Renishaw part probing, an 18,000 rpm HSK63 spindle, 80-bar through-tool coolant and a 117-position tool magazine. Swarf management has also been provided, consistent with unattended machining of light alloy parts. Designs are produced in SolidWorks, while Open Mind’s HyperMill CAM software is used for creating the cutter paths prior to program transfer to the Heidenhain control.
Brake caliper production is a natural application for five-axis machining, as Alcon discovered 10 years ago. Compared with four-axis metal cutting, it is not only faster but also inherently more accurate, as approach angles can be adjusted to allow shorter and hence more rigid tool holders to access awkward component areas.
For further information www.geokingsbury.com 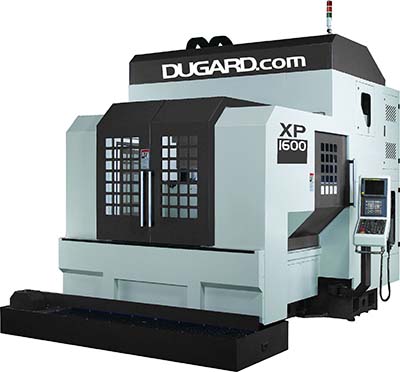 The foundry at Thomas Dudley in the West Midlands is to be equipped with a third CNC machine. This latest investment, in a new Dugard XP1600 CNC machining centre, comes in response to demand, further expanding the company’s ability to quickly manufacture patterns in-house.

“At present, we are producing patterns up to 700 mm wide,” explains foundry director Mick Cramphorn: “With this investment, we’ll be able to cut approximately 1150 mm wide, larger patterns all in-house. The machine has a faster spindle, which will reach up to 15,000 rpm, offering enhanced finishes when cutting fine details such as text or texture on patterns.
“Our maximum traverse feed rate at the moment is 15 m/min, whereas installing the new machine means this will increase up to 20 m/min, which is exactly what we need for projects that require a fast turn-around,” he continues. “The combination of advanced engineering technology, a skilled team and ‘can-do’ attitude provides a high level of flexibility. Producing new patterns with the Dugard XP1600 will enable us to reduce lead times even further.”
Thomas Dudley’s new investment supports a commitment to working in partnership with existing and new customers as a value-adding, strategic engineering partner. The company says that, unlike many competitors, its foundry division can call upon automated and air-set manufacturing facilities to provide a flexible, UK-based production platform.
For further information www.dugard.com 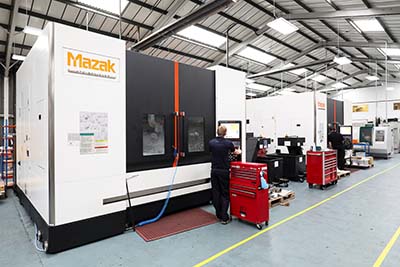 A Staffordshire engineering company has continued its investment in advanced CNC machining following a string of recent contract wins. Staffordshire Precision Engineering, based in Newcastle-under-Lyme, has purchased a VTC-800/20SR vertical travelling column five-axis machining centre from Yamazaki Mazak UK. The investment will enable the company, which turns over £3m, to move into the manufacture of larger, high-precision components for the automotive and aerospace industries, as well as the medical and scientific instrument markets.


“We’ve already won new business off the back of the purchase,” says director Gary Smith. “We can now also machine bigger parts, such as housings, to go alongside the medical and scientific instrumentation components we manufacture for existing customers, which means clients can consolidate their subcontract work into one supplier.”
Staffordshire Precision’s purchase of the VTC-800/20SR follows a successful period of expansion and investment. The company, which currently employs 49 people and runs a successful apprenticeship programme, recently moved to a new 28,000 sq ft site and created nine new jobs, with a further six likely to be added in the coming 12 months.
This investment in the VTC-800/20SR represents the fourth Mazak machine on site, the company having purchased two Quick Turn Smart 250M lathes and one Variaxis i-500 five-axis multi-tasking machining centre in 2016 as part of expansion plans.
“We like the fact that we can go to one supplier and source multiple machining solutions,” says Smith. “The two lathes were needed to service an aerospace contract, and the Variaxis has also been a huge asset. We have paired the machine with a pallet loader to increase production efficiency and it has already generated a lot of enquiries for highly complex aerospace parts.”
For further information
www.mazakeu.co.uk 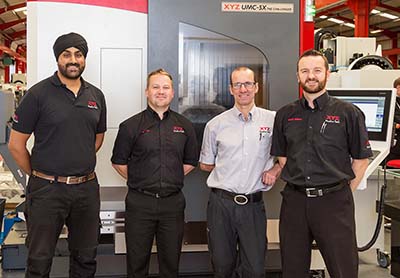 A combination of recruitment and internal promotions has strengthened the customer service team at XYZ Machine Tools, reflecting ongoing business growth and the company’s move into the sale of five-axis machining centres. After 10 years supporting customers through the XYZ programming helpline, Mark Higson is moving across to the newly created role of manufacturing engineer. This will see him provide detailed support to customers, with emphasis on developing demonstration parts and proving-out components. Moving in the opposite direction is Matt Hill, who will be adding his expertise to the programming helpline desk.

Two changes in the service department will see Steve Davie put his 12 years’ experience working across machine-build and electrical testing in the XYZ factory to use, benefitting customers across the southwest of England and south Wales in a customer-facing role as service engineer. Teaming up with Davie in the service team is new recruit Jas Chaven, who joins XYZ after spending 10 years in a machine tool service role.
For further information www.xyzmachinetools.com