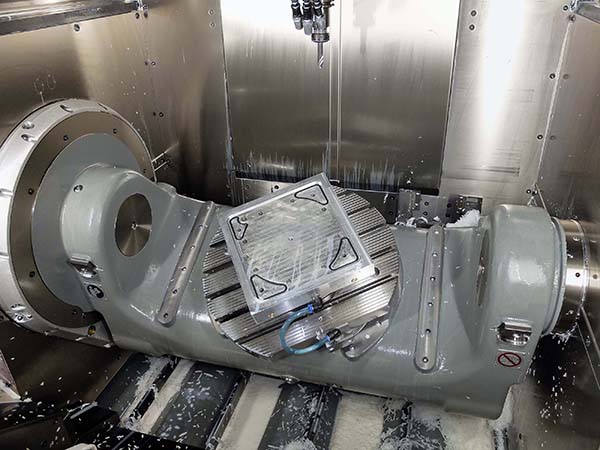 Clacton-based Dalau, which says it is the largest specialist supplier and manufacturer of plastic parts in the UK, believes it has identified the ideal five-axis production centre for machining plastics. 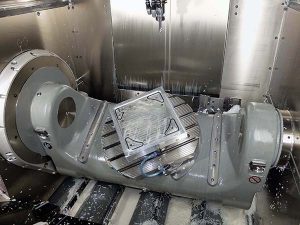 Chosen from a list of no less than 18 potential suppliers, the machine is a Hermle five-axis machining centre that has been modified to accept vacuum work-holding fixtures. The machine was supplied by the German manufacturer’s UK sales and service agent, Geo Kingsbury, which also carried out the customisation.
The Hermle installation is part of a £1m spend on machine tools at the Clacton factory within the past year to cope with a steep increase in demand for Dalau’s machined components across numerous industries.
Production manager Ben Bonds says: “Floor space is limited here and so is the roof height. The Hermle C 250 machining centre offered generous axis travels of 600, 550 and 450 mm in a compact footprint and just fitted in below the ceiling by a matter of inches. It was also advantageous that the optional Hermle tool magazine extension we ordered for increasing the number of cutters from 30 to 80 comes as a separate unit, which simplified transportation up a ramp and through a narrow opening.
“Problems during automatic tool change are one of the biggest causes of downtime here, so we were keen to avoid machines with a swing-arm tool changer,” he adds. “In contrast, the Hermle ATC system, where the spindle travels through a shutter door at the back of the machine and picks the tool directly from the magazine, has proved to be very reliable.”
For further information www.geokingsbury.com 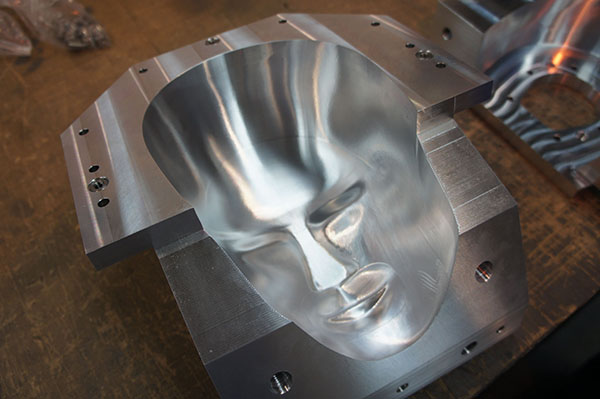 Huntingdon-based Encocam has invested in two Mikron HEM 700U five-axis machining centres from GF Machining Solutions. The machines have been installed at Stonehill Engineering, one of Encocam’s eight divisions, and are being used to machine a diverse range of precision components and mould tools for the company’s internal and external customers.


Since being installed, the majority of work undertaken on both Mikron machining centres has involved the machining of precision parts for Encocam’s largest division, Cellbond, which develops, manufactures and supplies passive safety testing products and equipment to the global automotive market.
In 2012 Cellbond moved into the anthropomorphic test device (ATD) sector, designing and manufacturing crash test dummies. Complex and technically sophisticated, Cellbond’s ATD products are made from hundreds of precision machined or moulded parts which undergo rigorous inspection and testing prior to (and post) assembly. All machined parts are produced in-house from a range of different materials that include aluminium, steel, bronze and plastics.
In addition to machined parts, Cellbond’s crash test dummies also include a number of plastic and rubber moulded components that are produced from mould tools. These tools are also designed and manufactured in house.
Says David Sheahan, Encocam’s purchasing and supply manager: “We understand the strengths of five-axis machining and how the technology can be used to machine complex shapes in one set-up and reduce part cycle times, as well as how the technology helps improve component accuracies and surface finishes.
“We have a good relationship with GF Machining Solutions,” he adds. “As well as their state-of-the-art machine tool technologies we, from experience, appreciate and value their after-sales services and support, which we believe is second to none.”
For further information www.gfms.com/uk 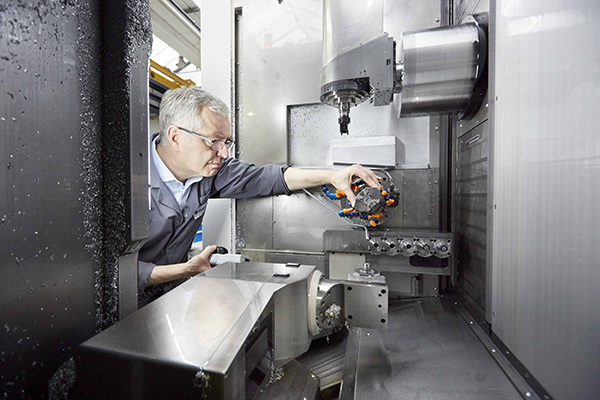 A Starrag Bumotec s181 machining centre is enabling a producer of ‘traditional’ turned parts to not only finish-machine a multi-operation component with interconnecting holes to a burr-free state and with high levels of roundness and surface finish, but allowing the company to welcome new business where effective and efficient single set-up, multi-operation workpieces are required.


The Fanuc-controlled s181 turn-mill centre – which effectively has nine CNC axes in total – was installed to produce a distributor for a respiratory protective device; the component that connects an oxygen bottle to a respirator mask (as used by the fire service).
Produced from a special aluminium alloy (AlSi05) forged blank, the workpiece presents a number of machining demands before it is anodised – in particular the production of a hole (H7) that is drilled to a tolerance of 14 µm and must
not have burrs on the interconnecting channels. The Bumotec inserts the blank automatically then processes all six sides of the workpiece.
One critical aspect of producing the component is the fact that the initial blank is forged to a high tolerance, so a specially-designed clamping system – one that will hold the part rigidly but without damage or deflection – has been developed and adapted to the machine.
With an HSK40 (30,000 rpm) spindle, the Bumotec s181 can, however, produce very small components (up to 32 mm) to 1.5 µm, and it is this quality that the new user is adamant “will position the company internationally for the production of high-precision components”.
For further information www.starrag.com 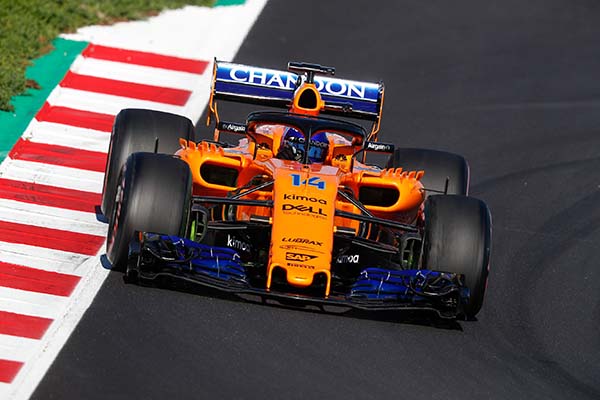 Yamazaki Mazak has supplied a further three machines to McLaren as part of its ongoing role as the Formula One team’s official supplier of CNC machine tools.


Having supplied the team for the past 19 years, the latest additions – two 5-axis Variaxis i-600 multi-tasking machining centres and one Quick Turn 250 MY turning centre – take McLaren’s current total of machine tools at its Surrey-based technology centre to 36.
Simon Roberts, chief operating officer at McLaren Racing, says: “Long-term partners like Mazak are extremely important to our team. We expect a lot from our technical partners and official suppliers, and Mazak continues to deliver year-on-year. With over 12% of our car being produced on Mazak machine tools, it’s vital to our performance on the track that upgrades are delivered on time and to the highest standard. The expansion of our in-house machining capabilities demonstrates our commitment to designing and manufacturing McLaren’s Formula One cars.”
Richard Smith, European group managing director at Yamazaki Mazak, adds: “Formula One is a sport defined by the finest of margins, with a network of engineers making constant changes to the car throughout the season. Given the intense and often unpredictable nature of races, the ability to quickly produce precision parts between race weekends is integral to the team’s ability to arrive at the starting grid in the best position possible. To have been the team’s exclusive supplier of CNC machine tools for 19 years is one of Yamazaki Mazak’s proudest achievements, and we believe the three new machines will contribute to McLaren continuing as one of the iconic motorsport teams for many years to come.”
For further information www.mazakeu.co.uk 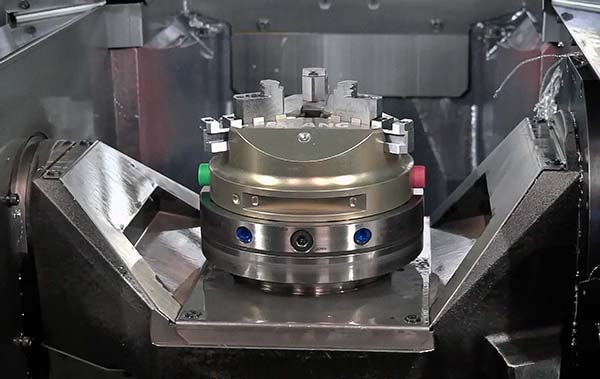 Tony Bess, director of subcontract machinists Plalite Ltd in Sittingbourne, has in the past three years invested £3m in capital equipment.

Included in the purchases were two Japanese-built Speedio M140X2 30-taper mill-turn centres from Brother, supplied by sole UK agent, Whitehouse Machine Tools. The first of the five-axis machines was installed in mid-2017 and proved so successful that a second was added six months later.
Plalite undertakes a lot of work requiring both milling and turning, so the multi-tasking capability of the M140X2s was attractive, as was their compact footprint on the shop floor.
“On the Brother machines, the number of operations needed to produce a part is minimised, there are no concentricity issues, blending is perfect and the tolerances we are able to hold allows us to quote very accurate work,” says Bess.
Short set-up times using milling cutter back ends and the adoption of Lang zero-point quick-change chucks help to maintain profitability by allowing the machines to be changed over quickly, which is especially important when producing components in small batches.
Responding to why he bought machining centres with turning capability – rather than bar automatics having live tooling – for the one-hit production of what are often predominantly rotational parts, Bess says: “With a turn-mill machine you get low milling capacity and a limited number of tools – compared with the 22 stations in the Brother turret – added to which, driven tool heads on lathes lack rigidity, which tends to cause vibration.
“With a mill-turn machine you get quick, very productive prismatic machining capability, and all the tools are in taper holders, which are much more rigid, particularly with simultaneous face contact,” he adds.
For further information www.wmtcnc.com