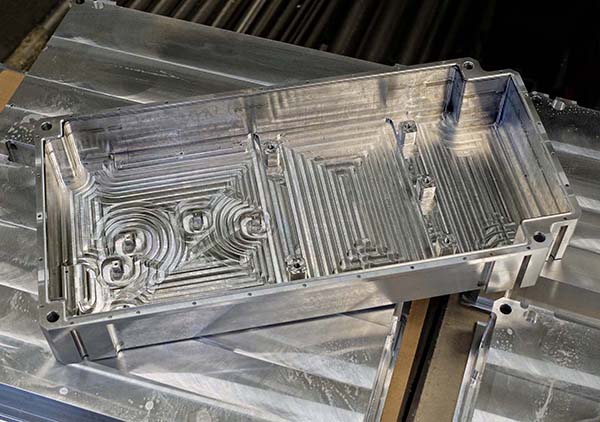 David Watt, owner of subcontractor DW Engineering, has trebled the size of his business since the beginning of the decade, with most of that growth taking place last year, when turnover doubled. He puts this success partly down to winning contracts for machining batch sizes up to 10 times larger than previously, which he largely fulfils using four Hurco vertical machining centres. Orders are now frequently received for thousands-off rather than hundreds. 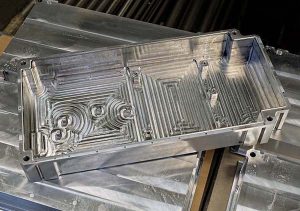 New work in the electronics and gas detection sectors has been secured, as well as in the resurgent oil and gas industry, while 80% of throughput is repeat business, some of which has been retained practically since the company was formed.
A further contributor to increased turnover and indeed profitability is Adaptipath high-speed machining software, which includes novel routines for rest-material removal in the latest version of Hurco’s WinMAX conversational control. Program cycles are significantly faster, especially when pocket milling.
Established in 2005 in Blantyre, near Hamilton, the subcontractor started using Hurco equipment from the outset with the purchase of a machining centre of nominally half-metre-cube capacity, and two CNC knee-type mills. 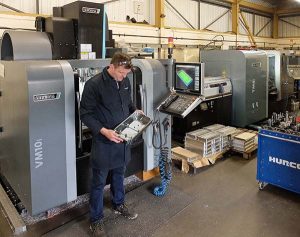 Together with a Hurco VM10 machining centre acquired five years later, these four machines were subsequently traded in for three of Hurco’s latest VM10i CNC vertical machining centres. One arrived in 2018 and was joined by two more this year. Additionally, there remains on the shop floor a smaller Hurco VM1 with 4th axis purchased in 2009, as well as a bar-fed Hurco TM8 CNC lathe that was installed six years later.
The Hurco VM10i offers travels of 660 x 406 x 508 mm in the X, Y and Z axes respectively, with a spindle nose to table distance of 102 mm. The 762 x 406 mm table is designed to span the entire Y axis, providing sufficient flexibility to produce a high mix of parts. Table loads of up to 340 kg can be accommodated. The machine is served by a 10,000 rpm spindle offering a power output of 11 kW and torque of 73.6 Nm at 1450 rpm. A rapid traverse rate of 24 m/min is offered in all three axes. Also provided as standard is an electric, side-mounted, 20-tool ATC. The swing-arm design means the ATC stays out the way, maximising the size of the work cube.
Comparing the performance of the nine-year-old VM1 with that of his three modern, slightly larger capacity Hurco VM10i vertical machining centres, Watt refers to an aluminium housing for an electronics industry customer that he has produced in two operations on both types of machine. 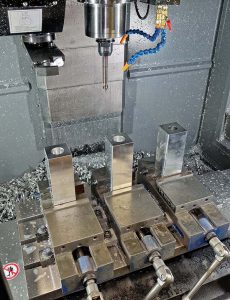 On the earlier model running a previous release of WinMAX programming software that included Ultipocket milling routines, the total cycle time was 165 minutes. However, that was before Hurco introduced Ultimotion software to control axis movements on its machines, without relying on hardware-based motion control. This addition has helped to reduce the cycle time for producing the electronics housing to 120 minutes, a saving of more than 27%.
Contributing especially to this increase in efficiency is the Adaptipath pocket-milling software with its new rest machining routines. The conversational pocketing feature is a module within Ultipocket in WinMax 10, mirroring that used in high-end CAD systems. This feature smooths the motion of the tool path and keeps chip load between a user-defined maximum and minimum, improving surface finish and extending tool life.
In addition to the two standard pocketing cycles involving inward and outward spiralling of the cutter, Adaptipath includes two extra rest machining routines, zig-zag and one-way, both of which involve alternate periods of climb milling. The amount of material encountered by the cutter is controlled, often allowing a full depth of cut rather than peck level milling, for higher metal removal rates that Watt says can be up to double.
With rest machining, a larger diameter tool than usual is used after roughing to remove most of the remaining unwanted material efficiently, followed by a finishing pass that automatically swaps the tool for a smaller diameter cutter to reach areas of the feature which the larger rest milling tool is unable to access. Watt considers this to offer a six to eight fold speed increase compared with previous machining methodology.
Looking back at his company’s progress over the past 14 years, he says: “The variety of materials we are asked to process is vast, ranging from stainless and mild steel, through titanium, copper, bronze, brass and aluminium, to PTFE, PEEK, acetal and nylon. Accuracies of ±0.1 mm are routinely achieved, but some parts have drawing tolerances down to ±10 µm. 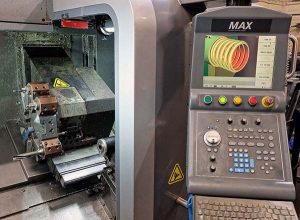 “We have never needed a CAM system to prepare programs for the Hurco machining centres, as the on-board conversational software is so powerful at creating the cutter paths – and there is no need for post processing,” explains Watt. “If any particularly complex geometry is included in a CAD model supplied by a customer, we use AutoCAD or SolidWorks to produce a DXF file that WinMAX imports directly.
“The Hurco machines, which continue to evolve and improve, have supported our diverse work and underpinned our success,” he concludes. “They are key to our ability to offer top-quality work, quick turnaround times and competitive prices.”
For further information www.hurco.co.uk 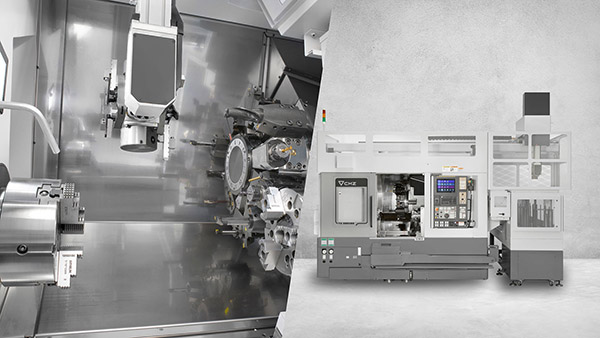 TDT Machine Tools has struck a new partnership deal with CMZ, a Spanish manufacturer of lathes and turning centres. 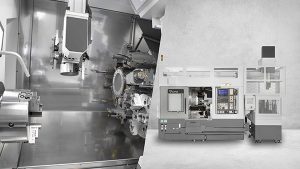 With immediate effect, TDT Machine Tools is able to offer CMZ machines across the central belt of the UK. This area extends coast-to-coast from Lincolnshire in the East, to Wales in the West, taking in the East and West Midlands, including Hereford and Worcester, and extending as far north as Sheffield and Doncaster.
“As many within the machine tool industry are aware, CMZ is a hallmark for quality,” states Phil Terry, sales director at TDT Machine Tools. “These machines are built to last for decades, without any compromise in precision or reliability. Importantly, we can supply standard CMZ lathes from factory stock in one week, which compares favourably to the five weeks typically required for machines from the Far East. Even CMZ lathes built to customer specifications are available on short lead times.”
For further information www.tdt-machinetools.co.uk 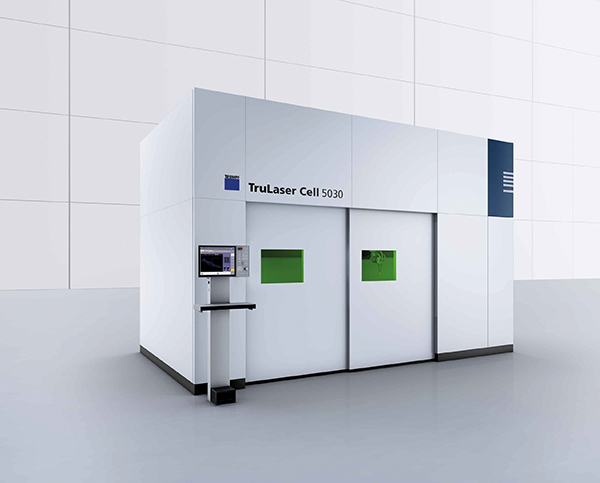 As part of its planned process of continuous investment in the latest manufacturing technologies, Dudley-based 2D and 3D laser-cutting specialist GF Laser has installed a Trumpf TruLaser Cell 5030 5-axis CNC laser-profiling machine, the first such model in the UK. 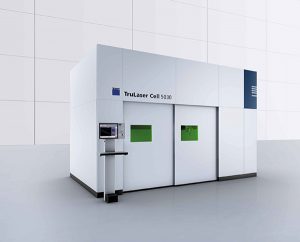 “With this machine we are investing in the latest fibre technology,” states Simon Tregillus, director of GF Laser. “The TruLaser Cell 5030 has replaced our original Trumpf TLC CUT 5 machine and is running alongside our existing TruLaser Cell 7040, which has been retained.”
GF Laser’s TLC CUT 5 was purchased in 2006 and, although still performing well, the introduction of the latest TruLaser Cell 5030 is moving the company into another league regarding speed and energy efficiency.
The machine has been set to work on the five-axis profiling and trimming of pressings, extrusions and spinnings – any component containing a form – for sectors such as automotive, yellow goods, construction, architecture and art. Materials processed on the TRUMPF TruLaser Cell 5030 include mild steel, stainless steel and aluminium. The machine also allows GF Laser to process reflective materials such as copper and brass in five axes, a task not previously possible using the company’s CO2-based TruLaser Cell 7040.
GF Laser, which is ISO 9001:2015 accredited, has grown its turnover from £2m to £3.5m in the past three years, and today employs 25 people.
“With the incredible cutting speeds of modern laser cutters, growing numbers of customers are turning to this technology instead of investing in a press tool, which creates more business for GF Laser,” says Tregillus. “The arrival of the TruLaser 5030 Cell allows us to accelerate the processing of existing work, thus creating more capacity.”
For further information www.uk.trumpf.com 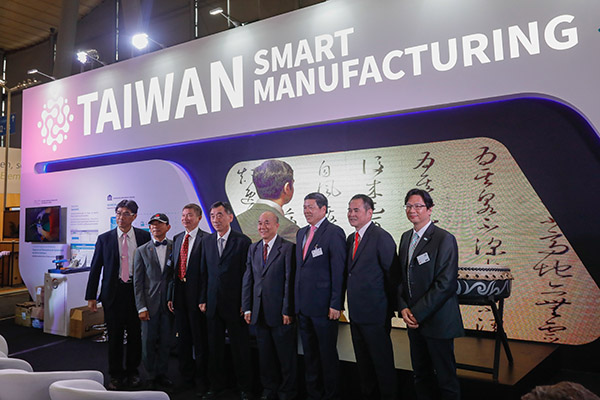 This year, Taiwan was ranked second in terms of the numbers of exhibitors participating at EMO and third in regards to exhibition space; impressive for a country about the size of the Switzerland. Among the principal exhibitors from Taiwan was the Fair Friend Group, which is now the third largest machine-tool group in the world. FFG owns 37 machine-tool brands and 50 production bases worldwide.


At EMO 2019, FFG’s exhibit filled the whole of hall 14, showcasing over 35 machines from 20 brands, and offering smart manufacturing solutions integrated with future 5G networking applications for industries that include automotive, aerospace, rail and mouldmaking.
For further information www.taitra.org.tw 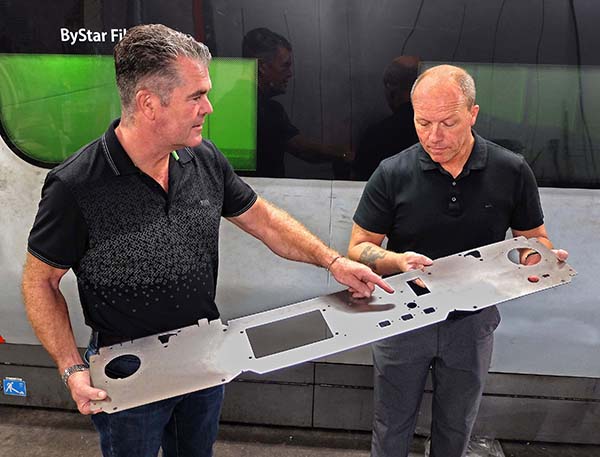 The most powerful flat-bed laser-profiling centre ever to be installed in the UK for processing sheet metal has started operation at subcontractor ESP Laser Cutting, a specialist in producing components from 3 x 1.5 m sheet in an array of materials to a thickness of 30 mm. ESP’s investment follows the development of a 12 kW fibre laser source by Bystronic, which has delivered a machine of that power, a ByStar Fiber 3015 to the contract machinist’s factory in Rotherham. 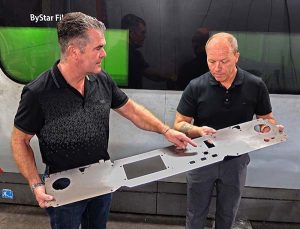 Delivering one-fifth more energy to the metal sheet than the previous most powerful fibre laser (10 kW), the new source was expected to be 20% faster at cutting. What ESP’s joint owners Steve McMillan and Paul Short actually experience is a typical productivity increase of 33%.
For processing one particular job, chain links from 10 mm mild steel sheet, a three-fold productivity improvement was gained on the 12 kW machine. When formerly profiling the parts on the ByStar Fiber 10 kW machine that is still in use at the Rotherham facility, 200 components per hour was the maximum output, as there was not sufficient laser power to employ nitrogen as the assist gas. Instead, oxygen had to be used, requiring the cutting speed to be reduced so that acceptable edge quality could be achieved.
By contrast, the 12 kW machine produces 600 parts per hour, as the higher power allows the use of nitrogen and hence full profiling speed. There is the added advantage that cut edges are better, especially on the underside of the sheet, than when formerly using ‘active’ oxygen, as ‘inert’ nitrogen does not react with the sheet material. ESP employs a profiling speed of 6900 mm/min when producing the chain links, although the machine is capable of 150 m/min on thin gauges.
For further information www.bystronic.co.uk