The benefits of upgrading an old bandsaw machine are numerous, considering the advances in the design and functions of modern bandsaw machines, reports Saws UK in a new guide that highlights the top five advantages of newer models.

First up is higher bed height. Most horizontal bandsaws today have a higher bed height so users do not stoop to operate them – much better for health as this reduces the likelihood of a back injury.
Second is swivel bows: many newer machines have swivel bows for mitring as standard, while some of the more premium models include both a left and right mitre facility. For those who do not perform much mitring, and the material is not too big, it is even possible to flip the material upside down to do the opposite mitre on one-way machines.
Blade speeds are a further consideration. Most newer bandsaws include variable blade speeds, unlike many older bandsaws which only have two – the lower to cut stainless steel and tool steels, and the higher to cut mild steel, aluminium and soft alloys. This factor means modern bandsaws can cut more materials more easily, often via a frequency inverter. As a result, users can finely tune the speed of sawing to give the best cut and economic blade life on all materials.
Increasingly, micro-blade lubrication systems are being used by those who do not want coolant on the floor, points out Saws UK. These systems can be retrofitted at any time.
The final point on the list is automation: newer machines offer advanced automation solutions, meaning users can program them to batch-saw easily and efficiently, and even leave machines running overnight, massively increasing productivity and saving costs over time, even if the upfront outlay is greater.
For further information www.sawsuk.com 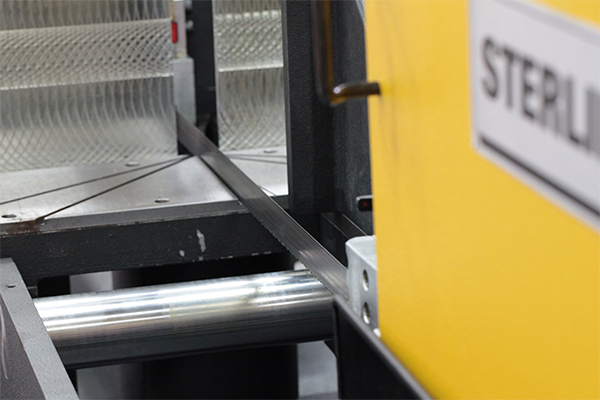 Selmach Machinery has released a guide to the benefits associated with the Sterling SRA DGSA bandsaw, which is suitable for cutting structural beam and box section. 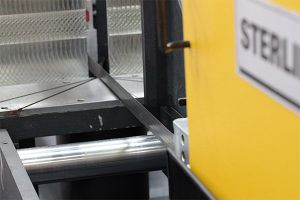 The semi-automatic machines that make up this series bring with them a range of features. Build quality and strength are the obvious benefits of these high-capacity machines with their heavy-duty bow structure and design. Importantly though, Selmach says that the Sterling SRA DGSA eliminates issues found in other, similar capacity machines with similar length bows, wherein speeds can increase during the cutting process, affecting both the life of the blade and the quality of cut. This is thanks to the twin ram (push and pull) system; the balancing ram on the rear of the machine ensures accurate cutting consistency throughout the cutting cycle.
Another quality that elevates the Sterling range is the mobile detached control panel, which is not fixed on one side as found on other bandsaws. The ergonomic control panel is wheel mounted for easy access at all times and to protect the controls from damage when loading or removing large, heavy materials such as beams. For mitred cuts, users can also bring the panel in close, allowing the operator to see marker lines and cuts much more easily, along with the ability to control all of the bandsaw’s functions.
The heavy-duty, full-stroke hydraulic vice follows the same ethos as the rest of the Sterling bandsaw, making squaring beams easy with the ability to slide from left to right. Also featured is a sacrificial plate which can be conveniently replaced, solving the problem of unavoidable wear and tear on the machine’s bed after years of throughput.
For further information https://selmach.com/ 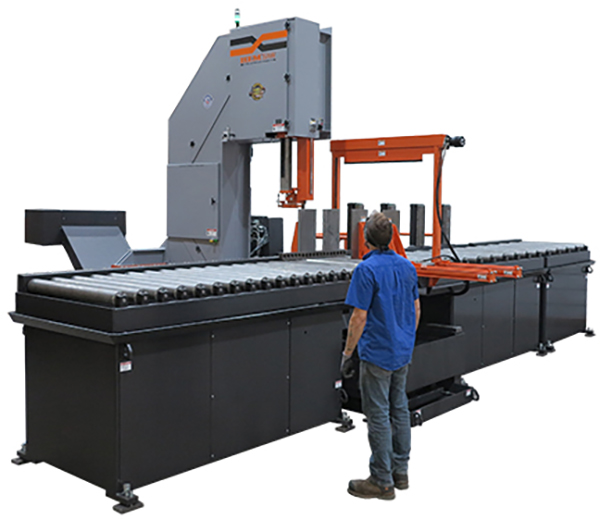 HE&M Saw recently had a customer which enquired about a bandsaw that could cut graphite, prompting the company to design and build a large vertical bandsaw that minimises the risks involved with cutting this material. 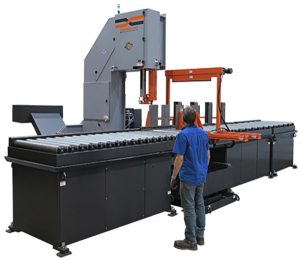 The challenges are not with cutting graphite per se, but rather with the material’s qualities. Under a great deal of pressure and heat, graphite converts to diamond, a tough material. In its pure form, graphite is relatively soft, and highly conductive of heat and electricity, which is why it is commonly used in products such as electrodes, batteries, solar panels and other industrial products.
Saw designers wanting to cut graphite are presented with unique challenges because the dust resulting from the soft material is quite fine. When airborne, it can settle around electrical components and connections, prompting the potential for electrical shorts due to the material’s high conductivity. The result is likely to be component failure, or perhaps even a fire. Graphite is non-flammable in bulk form, but combustible, and even explosive, with the proper mixtures of graphite dust and air.
Seeking to overcome these issues, the HE&M engineering team set about designing the V360M-CTS2 vertical bandsaw. This customised solution has safety features that minimise the risks of electrical shorts by incorporating a dust-proof and ATEX-rated motor. Additionally, all electrical parts have been specified with sealed housings to minimise the amount of exposure to graphite particles. The UK representative for HE&M Saw is Kaltenbach.
For further information https://kaltenbach.co.uk/ 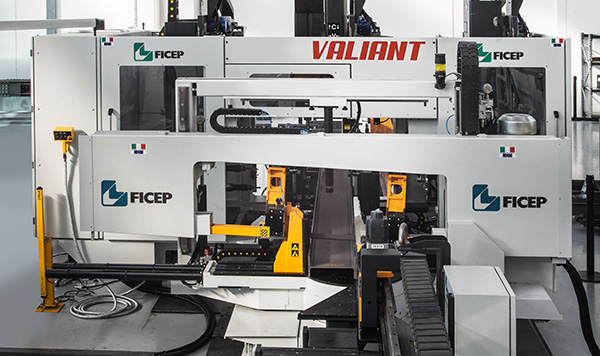 Aimed at the steel industry, Ficep can now offer its Valiant three-spindle CNC drilling line with an SN100 saw, which has been developed by a specialist team comprising 20 of the company’s technologists. 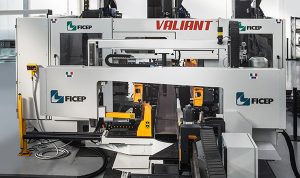 Mark Jones, who has been at the helm of the company for the past two decades, says resilience is the steel industry’s secret weapon, and in the next decade the industry needs to focus on tackling the big issues that have been looming up on the sector for some time.
He says: “From the need to reduce environmental impact, skill shortages and the transition to smart factories, including widespread automation, we are on the brink of deep-seated change. The peaks and troughs of the past 20 years have given the steel industry a resilience which we can use to our advantage, but we must pay attention to the lessons learnt.”
Backed by parent company Ficep SpA in Italy, Jones and his team have created several strong partnerships with complementary manufacturers, enabling them to offer a wide range of steel processing machinery to the UK market. In addition, the company’s extensive UK showroom facility can be used for customer training and product demonstrations, and houses a large spare-part facility to minimise downtimes for fabricators.
“We would have been celebrating our 20th anniversary at MACH, but the show has been postponed until January,” says Jones. “Despite this, I’m delighted to say that 2020 is set to be our busiest year yet for machinery orders, and we will be continuing to bring new and updated machines to market, to improve the productivity and processes of our steel processing clients.”
For further information www.ficep.co.uk 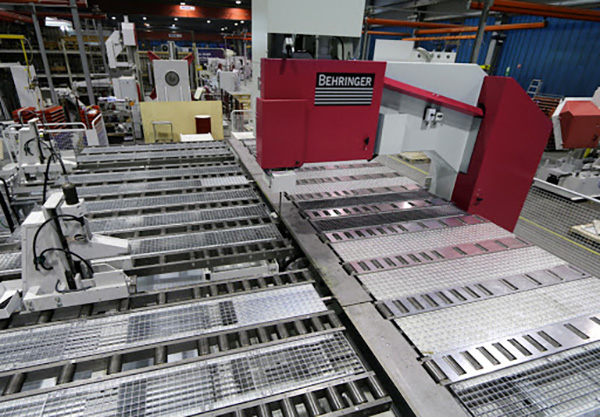 Centenary celebrations have recently taken place at Behringer. 100 years ago, the business started when August Behringer founded a small locksmith and mechanical workshop in the village of Kirchardt, near Stuttgart, Germany. Production of the first sawing products, metal hacksaws, began in 1952, with the necessary cast iron made at its own iron foundry. 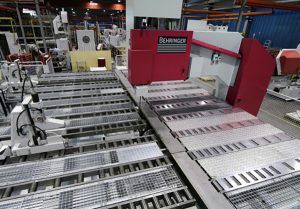 Since that time, Behringer sawing technology and the use of vibration-dampening cast iron components have been closely linked. The first bandsaw arrived in the 1970s, with a focus on robust, column-guided designs that prevails to this day. Behringer’s portfolio has since been bolstered by the addition of mitre saws and vertical bandsaws, while the integration of circular saw specialist, Eisele, in 2000, made it one of the few complete suppliers in the sawing technology market.
To celebrate the milestone, the company held a three-day party in its new production hall. ‘From a one-man business to the world´s leading provider of innovative sawing technology’ was the motto of the event, which doubled-up as an inauguration celebration of the company’s new 4000 sq m production facility.
The event was attended by customers and business partners from more than 30 nations, as well as employees from the whole Behringer Group and their families, alongside local residents of Kirchardt. With a varied programme of culinary delights, talks, live music and a fascinating show, Behringer was able to bring the anniversary motto ‘a story of people, pioneers and sawing machines’ to life.
For further information www.behringer.net