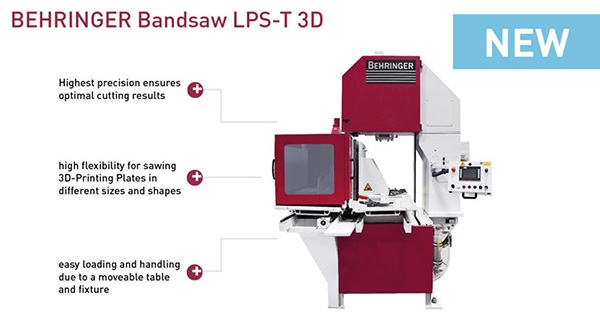 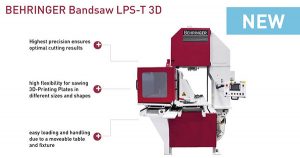 Additively manufactured parts are printed on a base plate via a supporting structure, and this base plate has to be removed. The new 3D series from Behringer is designed to separate the additively manufactured parts from the base plate with high cutting precision, thus ensuring neither the print plate nor the printed parts get damaged.
No matter whether steel, aluminium, titanium, nickel-based alloy or plastic, the 3D saws from Behringer are said to cut all additively manufactured parts in different sizes and shapes without any problems. As the fixture can be individually manufactured to customer requirements, high flexibility is guaranteed.
The HBE320-523 3D, which is based on the existing HBE Dynamic series, offers a fixture for small and medium-sized plates up to 500 x 300 mm. A simple, quick set-up process and compact machine dimensions are among the advantages of this model.
Behringer’s other machine in the series, the LPS-T 3D, demonstrates its strengths when sawing larger printing plates. The vertical design of the machine, with a freely accessible machine table, ensures easy loading and handling of large and/or heavy base plates. Especially when sawing steel or other difficult-to-cut materials, the standard servo-feed system provides a steady saw-feed movement that helps to ensure a quiet and stable cutting process. This capability results in high cutting performance and blade life.
With the blade deflection monitoring system and its adjustable thresholds, both models of the Behringer 3D series ensure high sawing precision.
For further information www.behringerltd.co.uk 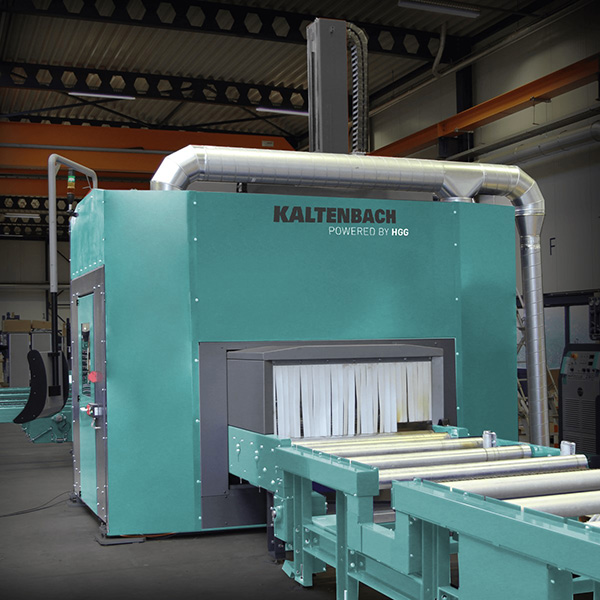 Kaltenbach and HGG Profiling Equipment, which specialises in high-speed plasma cutting and 3D profiling, have developed a strategic co-operation for the steel construction market across a wide geographical area. 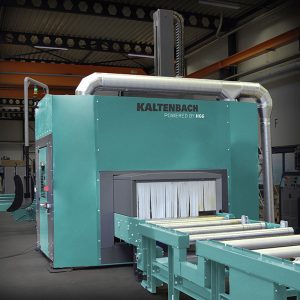 The partnership is focused on thermal cutting, coping, drilling and sawing solutions for profiles and beams.
“In order to push the boundaries of technology and stay ahead of the game, technology suppliers need to achieve a high degree of specialisation,” says Daan van Dee, HGG global channel manager. “By combining the best of thermal cutting with the best of sawing and drilling, we create a total solution that offers a significantly higher value for our clients and stands out from the competition.”
Kaltenbach will add a new coping robot to its product range which is powered by HGG. The new Kaltenbach thermal coping robot is said to be one the world’s most advanced, combining HGG’s software, scanning methods and cutting intelligence with German engineering and manufacturing quality.
“At Kaltenbach we strive to supply our customers with the very best solution for each type of technology,” says Matthias Rummel, Kaltenbach CSO.
In the field of 3D coping HGG has been known for years as the technology leader, and by integrating this technology in our automated steel processing systems we increase the productivity of our customers significantly.”
Right from the start, the partnership turned out to be a perfect fit, and has already been positively received by the market. By combining the development forces of both parties, the possibilities for customers are said to be endless.
For further information https://kaltenbach.co.uk/ 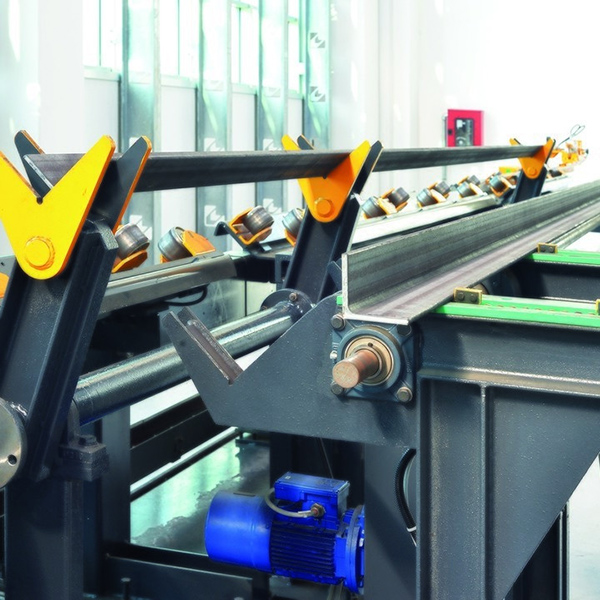 Barrett Steel, which operates 30 sites across the UK, including two key sites in Bradford and Shoreham, employs four Endeavour saw-drill lines (among other Ficep machines) and one Tipo A31 Plasma drill at Rotherham, taking the total number of installed Ficep machines to 11. 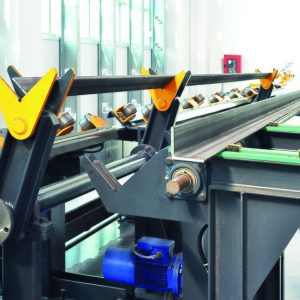 The family-owned business has been a Ficep customer for many years, but recent growth and site acquisitions generated a need for further steel processing machines with a focus on automation across three of Barrett Steel’s sites.
John Childs, operations manager, says: “We were influenced by the capabilities of Ficep’s automation and the Endeavour in particular. Line automation removes the need for our workers to touch steel between operations, which results in reducing the of risk accidents. This is a major factor in any decision making for us.”
The Endeavour enables operators to put material on at one end and remove it at the other in its completed state. Not only does this improve safety by reducing the need to handle steel, it releases workers to do other productive activities. This one change is contributing to a 40% increase in productivity, in particular at the Bradford site, and has seen machine utilisation running at around 90%.
“The Endeavour machines, at the time of purchase, were, in our opinion, the most sophisticated units on the market,” says Childs. “In the Endeavour, Ficep has a powerful machining centre with a close-coupled saw, while its speed in drilling and milling was much better than the competition. For us, the Ficep-linked automation is ahead of others on the market and it’s enabled Barrett Steel to increase capacity through improved productivity and a reduction in direct labour costs.”
For further information www.ficep.co.uk 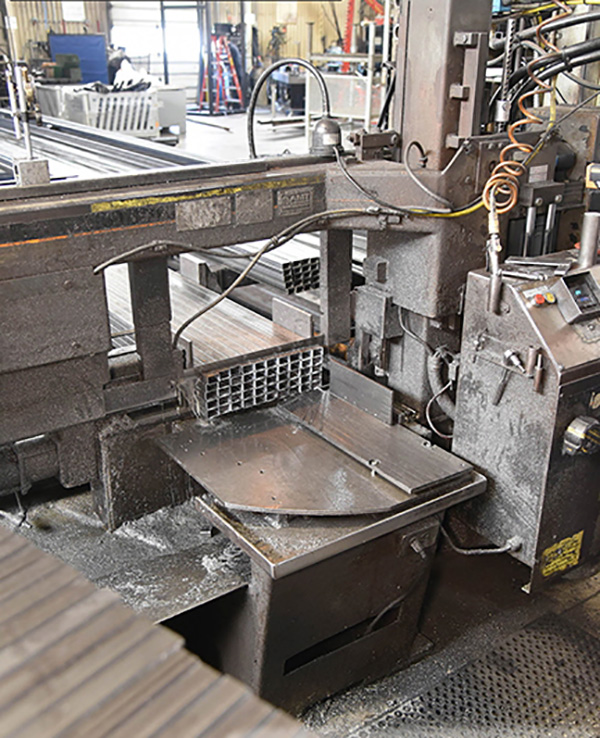 On a recent Saturday, HE&M Saw received an SOS of sorts from Pioneer IWS in Dalton, Ohio. 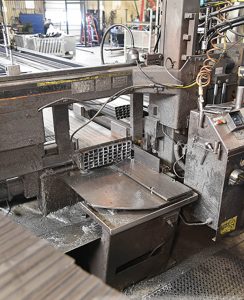 The gearbox on the company’s 22-year-old Twister bandsaw required replacement to continue manufacturing COVID-19 related hospital field cots. HE&M no longer manufactures the Twister, so it would seem that having a gearbox in stock would be a long shot. However, as HE&M Saw prioritises being able to service all of its saw models, the company maintains a large inventory of replacement parts for older and discontinued machines, including a certain gearbox.
As a result, HE&M Saw answered its customer’s request bright and early Monday morning and shipped the gearbox same-day.
“The overnight delivery of a new gearbox for our 22-year-old Twister bandsaw was critical to the production flow of manufacturing thousands of field hospital cots in response to the COVID-19 pandemic,” says Eddie Wengerd, general manager of Pioneer IWS.
Pioneer Equipment, like HE&M Saw, is an American-owned company with more than 40 years of manufacturing history. Core business focuses on the manufacture of farming equipment such as ploughs and carriage gears, but has also evolved into industrial workflow solutions and custom steel fabrication.
When the COVID-19 outbreak struck close to home – two of the Wengerd brothers had to quarantine after exposure at a trade show – the company decided to help in the nation’s counter-offensive.
Pioneer re-tooled its manufacturing facility in two weeks to mass produce the cots; around 100 can now be manufactured every hour.
For further information www.hemsaw.com 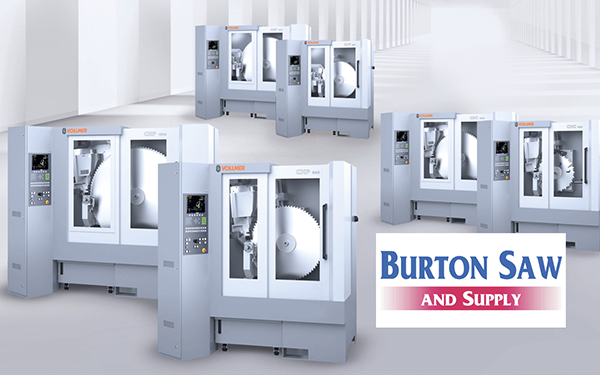 Vollmer has struck-up a new business partnership with US-based Burton Saw & Supply. Burton Saw & Supply – along with its affiliates Simonds International, Cut Technologies and BGR Saws – is a producer and marketer of cutting tools and related equipment for the primary wood fibre industry in North America. Due to Burton’s large presence within the saw-mill industry, Vollmer of America has now established a close partnership to respond quickly to market needs with proven and reliable solutions. 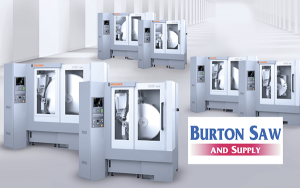 While Vollmer machines, as well as spare-part requests within the saw-mill industry, will now be quoted and sold through Burton Saw & Supply, all installation, training, service and warranty work will still be handled by Vollmer of America.
“We believe that the partnership with Burton Saw & Supply will be very beneficial for all parties involved, not only in regard to streamlining communication channels, but most importantly for our customers, who will now get to have a more frequent contact base and improved support system throughout the US and Canada,” states Shannon Fox, North American sales manager at Vollmer of America.
With more than 800 employees worldwide, the Vollmer Group – which was founded in 1909 – has established itself as a specialist in grinding and erosion equipment. The recent launch of the new VLaser 270 has made Vollmer a full-line supplier of tool machining solutions. The North American subsidiary currently counts 26 employees, 19 of which are based out of the Pittsburgh office. The other seven are located throughout the US to cover more ground in sales and service.
For further information www.vollmer-group.com