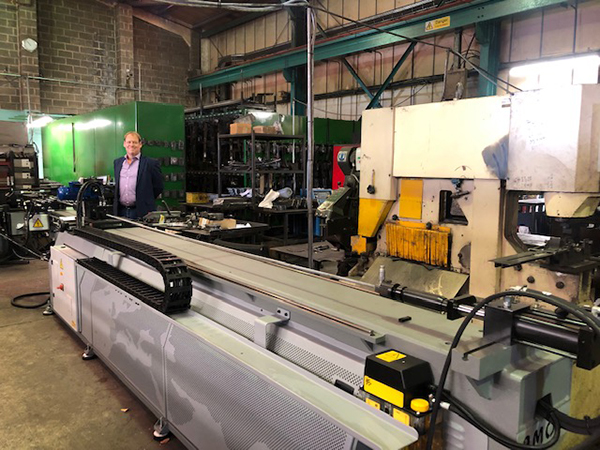 SevenHills Fabrication, part of the Steetley Corner Group of companies, has expanded its production to include bespoke tube bending through inward investment.

The company has invested £60,000 in an electric tube-bending machine to broaden its offer and complement its established design, consultancy and fabrication services, which include laser cutting and welding.
James Harding-Terry, managing director of Sheffield-based SevenHills, says: “The installation of a tube-bending machine not only adds significantly to our function as a one-stop-shop for fabrication projects, it is an important stage in the company’s transition to Industry 4.0, which is essential for future-proofing the business. It is a highly flexible piece of equipment with a range from 19 to 90 mm external diameter tube, and allows for bending complex tube geometries within seconds of programming.”
The AMOB NDH series electric tube-bending machine comes with a hydraulic mandrel extractor, hydraulic clamp and pressure die, and can be used to fabricate a variety of products, ranging from hand-rails to complex, bespoke geometric shapes.
Demonstrating 31% year-on-year growth with a turnover of £2.5 million, SevenHills will see investment reach £1m over the past two years.
“Increasing investment will see us install more new machinery, including a Bystronic press brake and a Panasonic robot welder before the end of the year,” says Harding-Terry. “This follows the commissioning of a £550,000 laser cutter less than two years ago. Although there is a lot of business uncertainty around at the moment due to Brexit, investment cannot stand still and UK businesses like ours must be ready to compete at the highest level, which means using the best resources.”
For further information www.sevenhillsfabrication.com 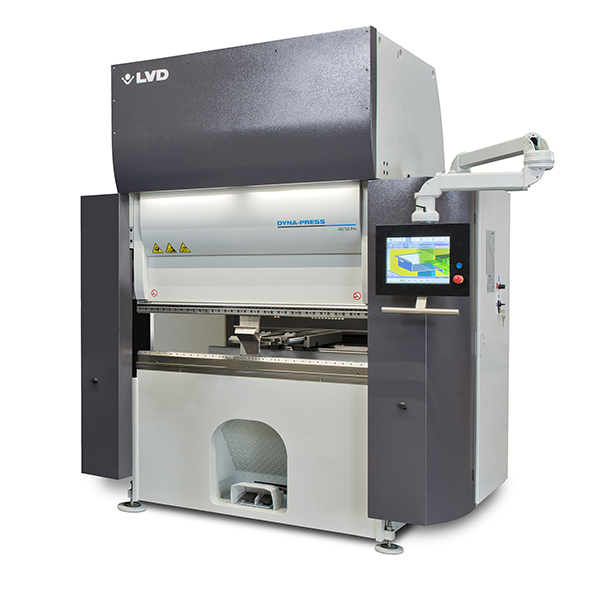 LVD has added the Dyna-Press 40/15 Pro to its Dyna-Press Series of high-speed electric-drive press brakes.

The 40-tonne press brake features a 1500 mm working length and a five-axis backgauge, and can bend at speeds of up to 25 mm/sec to generate more parts per hour at a lower cost per part. Dyna-Press 40/15 Pro can be combined with an industrial robot to create a compact, high-speed bending cell (Dyna-Cell) for automated bending operations.
The Dyna-Press electric ram offers a smooth transition from approach to working speed and minimises power consumption through the use of an optimal power to inertia motor ratio. Of note, the coupling between the ram and the servomotors is made using two heavy-duty ball screws to distribute force and tonnage evenly over the working length. As a result, the press brake provides fast, energy-efficient operation across a
range of bending jobs.
Dyna-Press 40/15 Pro is equipped with a five-axis backgauge which provides consistent and repeatable accuracy. The press brake uses vertical removal type tooling for the simple and quick changeovers, even of heavy tools.
LVD ensures a comfortable and safety-conscious environment for the operator. Like other Dyna-Press models, the newest Dyna-Press can be operated in a seated or standing position. The IRIS Lazer Safe guarding system provides an added measure of security.
Dyna-Press 40/15 Pro is easy to operate with minimal training. The 15” Touch-B touchscreen control features an intuitive graphical display and offers additional functionality by enabling the operator to create and simulate 3D designs at the control. Importantly, the controller is compatible with LVD’s CAM software, CADMAN-B.
Dyna-Press 40/15 Pro features a 400 mm opening height and a 200 mm stroke.
For further information www.lvdgroup.com 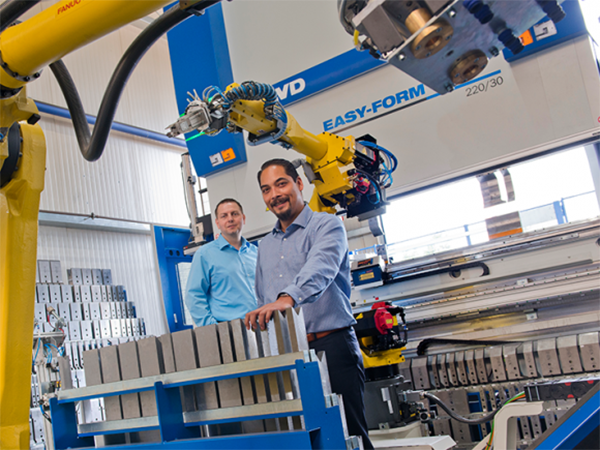 Two custom bending cells, each comprised of an LVD Easy-Form press brake and Fanuc robots, have automated the production of complex formed parts for Germany-based Kuipers CNC-Blechtechnik – parts that could not be manufactured using a standard modular solution. 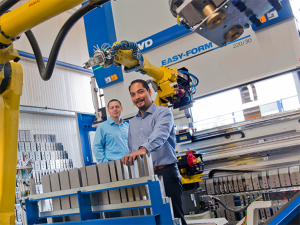 Today, Kuipers, a 100-year-old sheet metal subcontractor that serves a wide range of industries, uses the bending cells to handle complex interlaced parts with a high number of bends. In contrast to standardised automation solutions, the LVD bending cells offer the flexibility to program parts tailored to Kuipers’ requirements.
After the success of its first custom bending cell, the company decided to order a second cell – designed from the ground up and equipped with two movable Fanuc robots. The first robot feeds the parts from the material supply and pre-centres the blanks, while the second robot handles the components during the bending process, and stores and stacks manufactured parts.
Kuipers’ latest bending cell automatically sets up the press brake tools and the robot grippers. More than 80 m of tools are held within the cell. Four stations with flexible configurations handle the material supply. When completed, the parts are placed on a conveyor belt or stacked on pallets.
The press brake features LVD’s Easy-Form Laser adaptive bending system, which provides angle measurement and correction in real time.
For further information www.lvdgroup.com 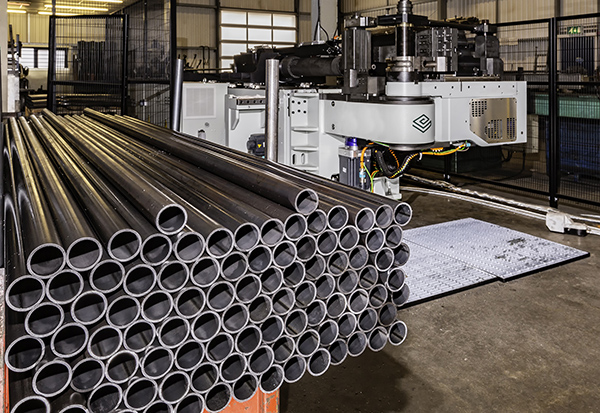 Some 20 years ago, Alistair Bailey became disillusioned with working long hours for the benefit of someone else’s business, so he made the break and created JML Engineering to specialise in tube bending and tubular fabrications. 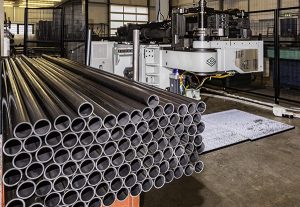 The business developed through investment in several pre-owned hydraulic tube-bending machines, with key customers providing steady orders for security (bollards and crash protection) and safety (hand railings and cages) products.
These old hydraulic machines served the business well, but as with all things, age started to tell and support for them from the manufacturers became non-existent. Recognising it was time to invest further in the business to improve productivity, Bailey researched the market and identified that a switch from hydraulically operated benders to all-electric was the way to go, a realisation which saw the arrival of his first BLM all-electric multi-stack tube bender, an Elect 52.
“The arrival of the BLM Elect 52 certainly eased the demands being placed on production due to business growing rapidly, and the machine handled the bending of smaller handrails with ease,” he says.
A key advantage of the BLM all-electric Elect machines is the speed at which they can be set-up and the guarantee that bends will be consistent, without any need for adjustment from the start of a batch to the last tube.
“On our hydraulic machines, on which we were very well versed, it could take 45 minutes to achieve a first off, after which there would be a degree of trial and error before we got the bend just as we wanted it. Now, we can complete the set-up in less than 15 minutes and know that the first tube will be within specification.”
For further information www.blmgroup.com 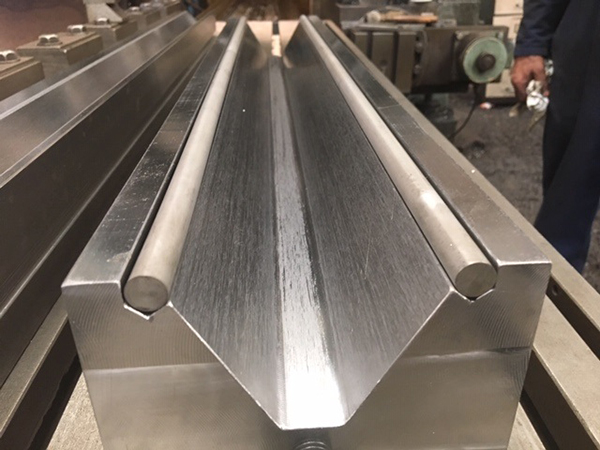 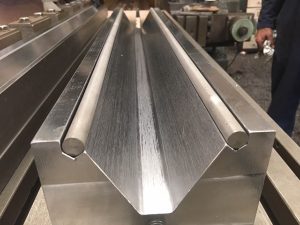 The company was set up by Harold Ashmore and his wife Harriet to make bedstead fittings, before the foundry side of the business was developed for engineering castings. The firm was taken over by James Weaver in 1930, which subsequently led to the production of castings for the machine tool industry.
In 1950, Danny Weaver entered the business and became managing director in 1963, a move that led to the establishment of a machine shop to complement the existing foundry business. Through its strong links with the machine tool trade, Ashmores subsequently began to manufacture press brake tools on a subcontract basis for companies such as Bronx Engineering.
In 1983, Danny Weaver’s son Guy entered the business, becoming managing director in 2000. The severe economic downturn in the early 1980s led to much-needed further diversification. As a result, the company started to market press brake tools directly to companies, rather than on a subcontract basis.
A century after its formation and Ashmores is still flourishing, manufacturing tools for a range of industries, including the computer, light fitting, supermarket shelving, shipping container and motorway barrier sectors. In addition, the company has recently supplied a new set of tools to M-Sport, the Ford Rally team, from which it will manufacture many specialist parts. Together with guillotine blades, both new and re-ground, Ashmores believes that it has the ability to serve the metal-forming industry for many more years to come.
For further information www.pressbraketool.co.uk