A group of Midlands-based manufacturers has set its sights on taking a share of the expected £300bn spend on vehicle electrification.

The Manufacturing Assembly Network (MAN), which is made up of eight subcontract manufacturers and a specialist design agency, is already supplying components to 10 projects focused on battery development and electric motors, and is expecting this figure to more than double over the next 12 months. Bosses at the collective point to its ability to offer a single source solution, with 1st tiers and major blue-chip OEMs able to tap into a host of engineering disciplines, ranging from concept design, precision pressings, laminations and forgings, to castings and fabrication.
“I can’t remember the last time our members have been so excited about the potential opportunities presented by just one sector; spend on automotive electrification is going through the roof and legislation is driving it,” explains Rowan Crozier, CEO of Brandauer and chairman of MAN. “A single electric car can contain anything between 70 and 150 electric motors, which makes it a very exciting opportunity for parts manufacturers. We are already supplying a number of firms with electrical steel laminations.”
For further information www.man-group.co.uk 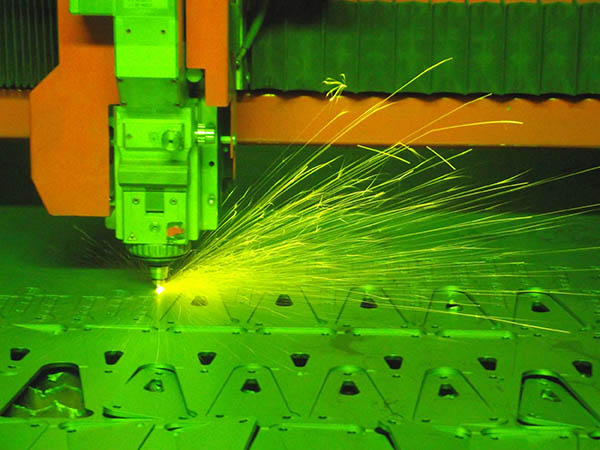 A sheet-metal subcontractor has recently switched over to Radan software to drive its fleet of four laser cutters and two waterjet machines following an intensive three months of development, trials and training. Jason George, IT and facilities manager at Nottinghamshire-based Lasershape, says that ROI in Radan looks likely to be achieved within two and half months. 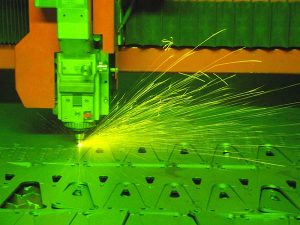 Manufacturing components primarily for the general engineering, aerospace, rail and automotive industries, Lasershape’s core products are laser cut, folded and powder coated, with some assembly where required, and include parts for a wide range of interesting applications.
George has been implementing a series of measures over the past two years aimed at driving down costs, and felt the company’s CADCAM package was falling behind in terms of efficiency: “The system was very manual, and although we had a project with our supplier who was trying to automate it, we simply couldn’t rely on the results being produced, and had to have an operative watching over it, which defeated the object.”
Lasershape opted to replace the system with Radan, and found in numerous trials that it led to considerable savings.
“We use around £400,000 worth of material a month, and with the previous CADCAM package our scrap rate was around 20-30%,” says George. “We compared a trial we ran through Radan with what our production team had actually sent to the shop floor after making manual changes to improve the nest from the previous system, and it still reduced wastage by approximately 15%.”
The company also logs the reason for every scrapped part, and George says poor sequencing was the biggest single cause under the old system, which was not producing the high standard required by the company.
“With the large number of parts we produce, it’s impossible to go through each nest and manually select the cutting sequence; we have to rely on automation,” says George. “We ran the same job through Radan – and I even tried to trick it – but it was much better at getting out of areas without crashing the head.
“Radan’s not just about accelerating processes, it’s about accuracy, both in terms of the cutting sequence, and the finished component,” he adds.
Another Radan test involved a production job of 400+ runs involving 3 mm aluminium parts. 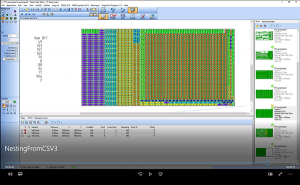 “This particular job had ‘head collision’ written all over it, but Radan cut each sheet 52 minutes quicker than the old system, and with no collisions,” explains George. “When I looked at the code I saw this was because Radan was able to cut at full speed, while the other software applied slower cutting conditions for small features. This would save us considerable time.”
And an optimised Radan nest in one of the early trials saved over five hours compared with the company’s previous nests, which George says represents shaving a full minute off each part. Having built a number of apps around Radan to meet Lasershape’s own specific requirements, the company benefits from two-way communication between CADCAM and its Epicor production control software.
“We’ve customised the main menus inside Radan and linked them to our own Lasershape menus,” says George. “This is helpful right from when we receive an initial inquiry, in that we can see at a glance how many sheets we’ll need for the job.
“And significant benefits
stem from our new ‘Workflow’ system,” he continues. “It controls stock, live updates of programs and remnant creation inside Radan. All this gives us an up-to-the-minute overview of what’s happening on the shop floor.”
He explains that Workflow means the tasks of marking programs as complete, and releasing remnants in Radan, can be performed by Android PDAs on the shop floor. George has also created a part editor app to mass edit components.
“It automates Radan’s functionality to work on multiple parts at the same time, and means we can mass import DXF files and edit the data quickly,” he says. “This is particularly important as we work on around 20,000 live items every month, and have nearly 200,000 repeat parts in the system.”
The company’s first task when an inquiry comes in, is to add a quote in Epicor. 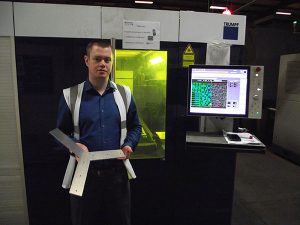 “We’ve got a button in Epicor that says ‘Prepare Radan.’ This generates a quotation folder for us, a standard project template ready for the nester to nest in, and sub directories for the parts. Then we’re ready to start drawing the part in Radan 2D. The parts are imported and saved in the quote directory, which means quoted parts don’t touch our master part library. With the previous CADCAM system we had a bulging part library containing parts for jobs we didn’t win, and never cut. So this is a huge improvement.”
After that, Lasershape uses the part editor app to set customers, materials and machining operations, including any required countersinking and folding. This task is followed by another customised operation, running what the company’s calls ‘The Migrator’, which scans the entire project, calculates how long each part is going to take, and the exact percentage of a sheet it will use.
“Migrator then populates all relevant fields within Epicor,” says George. “When we win the job, it’s converted to an order, and Epicor tells Radan which customer the parts are for, creating directories for the project.”
The nesting team use Workflow to specify the parts for nesting, and send them to Radan.
“It’s so simple to pull in the raw material sheets, nest them, post them, and send them out for cutting on our Trumpf and Bystronic lasers, or Flow and Techni waterjets,” says George.
He says it’s vital that Radan drives both cutting technologies, and can work with a variety of CNC machine tool brands.
“With Radan we just have the one part library, which services all our machines; we couldn’t have multiple part libraries for the same components.”
Concluding, George says the Radan trials and tests gave consistent results and reduced the task of producing nests to what he calls “a simple admin role” as the system automatically creates efficient, cost-saving component nests.
“As everything we do now is about efficiency and data capture, Radan has become a key, integral part of the business.”
For further information www.radan.com 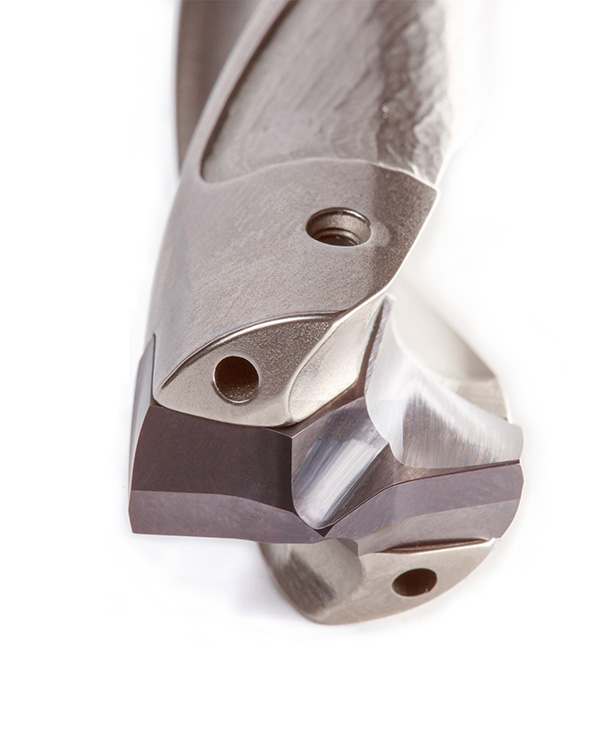 A solution has been developed by Mapal for producing the small connecting pin bore on automotive connecting rods. 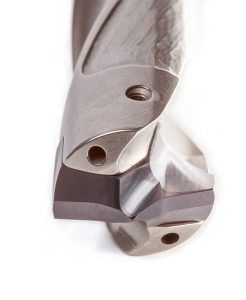 The newly developed tool is suitable for wet or MQL machining operations, on transfer lines or machining centres.
Within automotive engines, connecting rods are highly stressed components. To take account of downsizing trends and the reduction of CO2 emissions, connecting rods are also becoming increasingly lighter. Indeed, the combination of high-strength materials and modern production processes has seen modern connecting rods change shape and dimension.
During the machining of connecting rods, the small connecting pin bore is a particular challenge. Depending on the geometry, there are completely different drilling situations that cater for the connecting rod’s forms, flats and conical/spherical surfaces. Especially for this type of machining, Mapal has developed a modular tool concept for drilling from solid with indexable inserts. The introduction of radially integrated, sintered indexable inserts – each with four cutting edges – can now be applied to such operations.
Mapal has designed the indexable inserts and chip spaces to meet the special requirements of the different drilling applications. The insert materials and composition have also been adapted. Among other things, the newly developed CVD coating is applied to combine the previously opposing high ductility and high wear resistance parameters. As a result, there now exists the potential to machine at significantly higher cutting speeds than before.
The tool body of the range is made from an optimised material that produces significantly less vibration. Furthermore, a central coolant supply in the holder ensures the optimum provision of coolant directly to the cutting edges.
For further information www.mapal.com 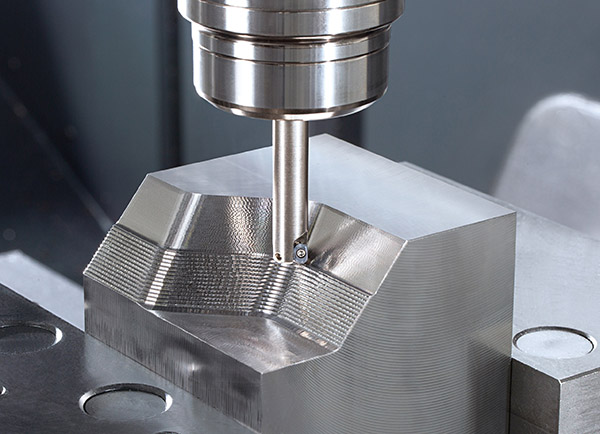 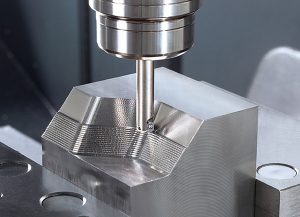 Aimed at the mould and die industry, and general machining applications, the TungForceFeed is available with both a high-feed insert and an R2 insert line that can be applied to machining a diverse range of materials, from alloy steel, stainless and hardened steels, through to cast iron, titanium alloys and heat resistant alloys such as Inconel and Hastelloy.
Tungaloy’s high-feed insert is suitable for general high-feed milling applications and subcontract machine shops, while the R2 insert designation is designed for full profiling and semi-roughing to semi-finishing processes. R2 inserts have a free-cutting geometry that eliminates chatter and improves surface finishes, along with a built-in wiper that reduces burr formation. Applying the latest PremiumTec coatings, the inserts are offered in Tungaloy’s AH3225 and AH8015 grades. The AH3225 incorporates a multi-layer nano coating that is said to optimise cutting-edge integrity and increase wear, fracture and oxidation resistance. AH8015 has a hard coating layer that improves performance on difficult to machine materials, reports Tungaloy.
Especially prominent in high-feed machining applications is the design of the toolholder, which is suitable for shoulder milling, slotting, ramping, plunging and helical feed drilling. The toolholder pockets are designed with a positive inclination that works in synergy with the thick corner inserts. Supporting this feature, the toolholders have a robust M2 screw that reduces screw neck shearing, which can be commonplace during high cutting force applications.
For further information www.tungaloy.com/uk 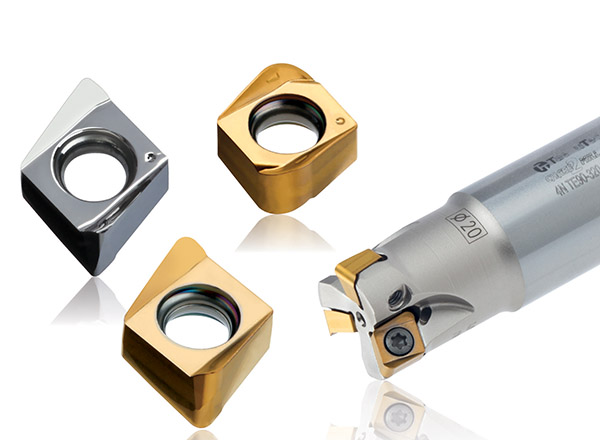 Introduced to the UK two years ago, the TaeguTec Chase2Mill series of end mill tools is now being extended with the arrival of two additional insert designations. 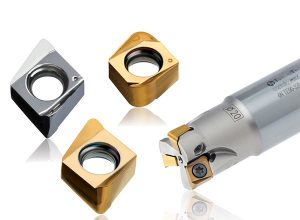 Designed for ramp and slot milling applications, Chase2Mill is available in end mill, modular or face mill designations. Initially launched with a four-corner, double-sided 4NKT 06 insert range featuring a 90° entry angle that is suitable for high ramp-down applications, the 4NKT 06 has been expanded and a newly developed 4NHT insert series released.
TaeguTec’s 4NKT 06 corner R range insert has been extended (04R-20R) to meet the wider range of corner radius requirements demanded by today’s industry. Adding to the existing 8 and 16 mm radius inserts, the company has expanded the line to include a 4, 12 and 20 mm radius offering. The extended 4NKT 06 is available with TaeguTec’s ML and M geometry, and the TT8080 and TT9080 grades, which combine to improve cutting load, minimise built-up-edge and generate high surface finish, says the company.
In addition, the 4NHT 06 insert designation has also been launched with the 4NHT 06-ML, which is said to be characterised by its ability to generate low cutting loads and high surface finishes (credit to ground cutting edges that minimise built-up-edge).
Another release is the 4NHT 06-AL series of uncoated inserts for aluminium and non-ferrous cutting applications.
For further information www.taegutec.com