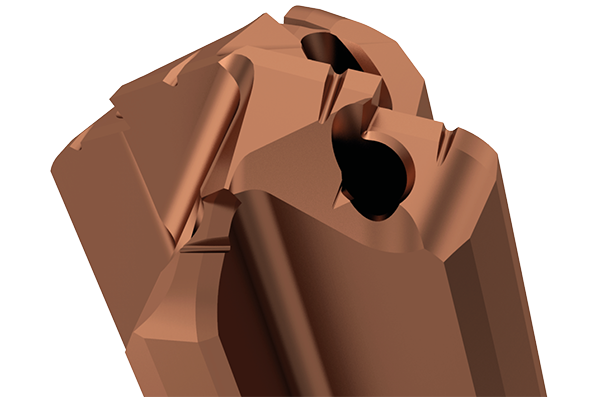 These straight flute deep-hole drills are robust with a geometry that ensures the drill core is more than 50% of the overall diameter. Guhring has also developed geometry that consists of two core cutting edges supported by four outer flutes that are axially displaced to split the chips and improve centring and precision, while reducing cutting forces. As a result, the bottom of the hole will be two-stepped as the drill has a 141° angle on the primary cutting edge, followed by a 145° angle on the outer cutting edges. Four cooling channels further improve chip clearance, allowing high-pressure coolant to each of the four cutting edges – prolonging tool life by preventing swarf re-cutting and creating an efficient chip removal sequence.

VB 80 and VB 100 deep-hole drills also consist of four round margins with a 90° division that further enhances precision, concentricity and surface finishes down to IT6. With the abrasive wear divided through four flutes as opposed to two, as in most ranges, the VB 80 and VB 100 improve tool life and performance significantly. In fact, the drills have reduced cycle times by more than 30% during field tests, while extending tool life, hole quality and overall performance far beyond the realms of two-flute gun drill variants.