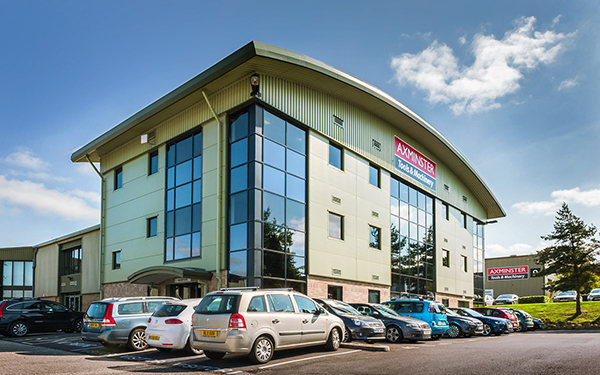 Axminster Tools has established itself as a market leader in the mail order tools and machinery industry, having supplied premium quality products throughout Europe for over 45 years. This family-built business based in Devon has a proud heritage of UK manufacturing operations, and recently invested in a new sliding-head lathe from Star GB to expand upon its already impressive array of machines. 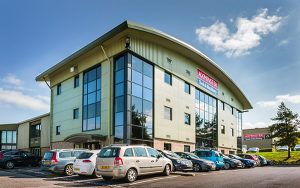 Axminster sources products from all over the world, as well as supporting a number of specialist UK companies. With over 17,000 products lines, a multitude of brands and ranges are brought together on the company’s website and in its stores. Boasting steady year-on-year growth through product innovation, competitive pricing and a commitment to customer satisfaction, Axminster’s management team recently decided to further enhance business by investing in the company’s manufacturing processes. The upgrades would allow Axminster Tools to become more efficient, increase productivity and open new opportunities to develop its product range.
With an SR-32J and SR-38 Type B from Star already on-site, and a relationship with the machine-tool supplier dating back over five years, Axminster’s supply chain director Andrew Parkhouse had no question of where to place his trust for guidance on the company’s latest project.
The project focused on a chuck jaw (pictured) for a woodturning lathe, originally produced locally in small quantities over 30 years ago. As demand increased, the company began sourcing the parts overseas to cope with growing volumes, but was faced with quality concerns that led Axminster to bring the component back in-house, where it has since remained for several years.
With production demand in the region of 25,000 units per annum, and current methods of manufacture requiring five operations, including milling, grinding and finishing, the company challenged Star to produce the jaw in a single operation. 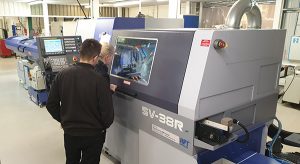 The applications team at Star was confident the project was well-suited to a sliding-head lathe and set about selecting the ideal machine for the job. Star was then able to provide a competitive cycle time estimate which would allow Axminster to produce the components more efficiently and increase profitability.
Star’s SV-38R, with its capabilities and flexibility, made the machine a firm favourite for the project. Axminster commissioned a turnkey package and began building an extension to its facility to accommodate the new machine upon completion.
The high-specification machine chosen combines the fast processing ability of a traditional platen-type sliding-head lathe with the flexibility of a turret machine, to enable simultaneous machining operations. The turret allows for a substantial number of tools to be mounted and includes an independent Z3 axis, enabling two different features to be machined at the same time using Star’s ‘super-position’ control mode.
Fanuc’s 31i-B5 control delivers full five-axis capability, permitting complex components to be processed. In addition, the B-axis tool holders on the turret enable angular features to be machined on both the main and sub-spindle.
A sub-spindle with independent eight-station platen increases overlapped machining possibilities, while the Y2 axis on the sub-spindle platen allows both cross working and front-facing power tools to be mounted in any station. The flexibility of the Star SV-38R is further enhanced by its ability to switch between guide bush mode (Swiss type) and non-guide bush mode. 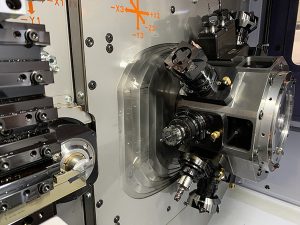 Through combining the machine’s balanced milling capability, specialist tooling up to 75 mm diameter and comprehensive process development, the final manufacturing time was reduced by 60% in comparison with the existing method. In addition to a faster cutting cycle, component quality has also significantly improved as a result of ‘one-hit’ machining, reducing the process down from the previous five operations.
Parkhouse says: “The SV-38R is a significant investment and we are confident that it will allow Axminster to progress to the next level. Our new machine will only run these parts for the majority of its service, however, we highly value the additional capabilities it gives us to develop other products in the future.
“At present, the machine also significantly releases capacity on our other machines to truly maximise the machining potential of our business,” he adds. “There are exciting times ahead for Axminster and we can’t wait to further reap the benefits of our continued investment in Star and its technology.”
Following the successful pass-off and delivery of the new machine, Axminster’s engineers underwent programmer training at Star’s UK headquarters in Derby followed by on-site setting and operation training. Included in the package was Star’s programming software, PU-JR. This editor makes programming the three-channel machine more efficient, allowing Axminster’s setters to generate complicated programs quickly and easily. 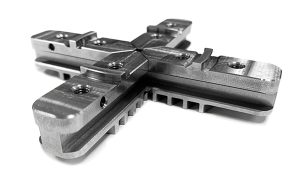 Says Parkhouse: “Our machinist, Marika, is particularly excited about the new machine. She has been with us a relatively short amount of time but took a liking to the Star sliding-head machines very early on. Marika joined us with little machining experience but is now operating, setting and programming all of our machines. With Star’s help, she will be up to speed with the SV-38R in no time.”
Moving forward, Axminster is forecasting continued growth with an ongoing investment strategy to keep up with the fast-moving industry it supplies. The company and its employees have consistently been nominated for awards, and several prizes have been won for customer service, alongside recently achieving high rankings on major consumer choice platforms in its business category.
For further information www.stargb.com