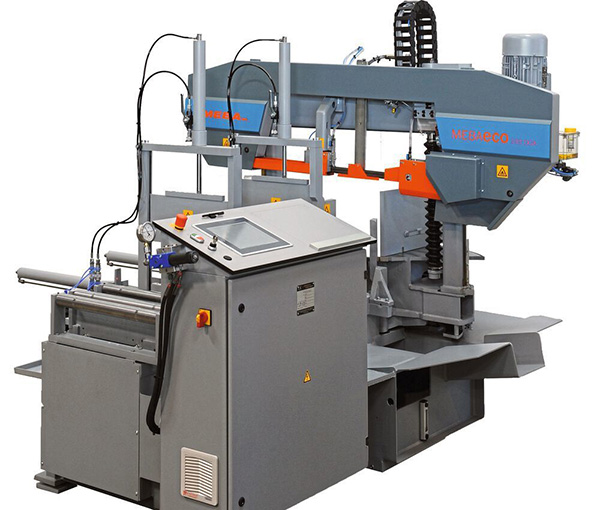 At Blechexpo 2019 in Stuttgart earlier this month, MEBA shone the spotlight on its recently upgraded MEBAeco 335 DGA-600, which the company describes as the flagship of double-mitre technology. 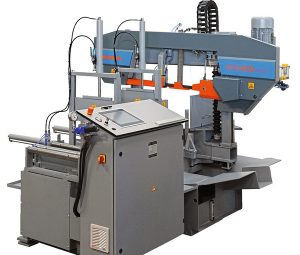 MEBAeco metal bandsaw machines are based on a modular system that has been continuously developed. The system is the platform on which customers can assemble their individual machines, aligned to specific sawing targets. From a simple, semi-automatic straight-cutting machine, to a patented fully automatic double mitre saw, everything is said to be possible.
The MEBAeco 335 DGA-600 has features such as electric saw feed with ballscrew, or the patented double mitre system which ensures the right angled tension of the material.
Thanks to the frequency-controlled AC drive, the saw blade speed is infinitely variable from 15 to 150 m/min. The continuous use of recirculating ball bearing guides makes the MEBAeco automatic saws smooth, highly loadable, low maintenance and backlash-free. In addition, MEBA double-mitre bandsaws allow the processing of different angle and length combinations.
MEBAeco also makes no compromises when it comes to automation. For a completely automated sawing process, MEBAeco machines can be linked with material storage, as well as infeed and outfeed logistics. Automated production lines for steel structures can be implemented in conjunction with beam drilling rigs, sandblasting rigs, engraving equipment or welding robots.
Cross-linked sawing MEBAconnect solutions are used to good effect in the MEBAeco 335 DGA-600. This machine is equipped with a networkable, ergonomic panel control with various option packages. The packages enable the setting of sawing programs in work preparation, the import of sawing programs from CAD with DSTV interface and data export, or facilitate the extended MEBA Teleservice for remote maintenance.
For further information www.meba-saw.com

According to Bison Machinery, it would be easy to assume that capacity is the deciding factor when selecting a bandsaw, however, with applications varying from the mitre cutting of small box sections and angles, to cutting solid bar stock in exotic materials, it is essential that other machine features are also assessed when looking to cut structural sections.

For instance, unlike older models, most bandsaws now mitre by moving the head, otherwise known as the bow or saw frame, rather than turning the clamps and rotating the material. Smaller saws are often single mitre, as it is quicker to turn the material over, than to reset the saw frame to make a mitre cut in the other direction. However, when working with larger beams, it is essential that the saw frame can be angled in both directions to perform opposite mitres.
In terms of vice design, hydraulic clamping is desirable when cutting larger and heavier beams as it requires a lot of force to pull a beam back in line with the machine. Additionally, machines designed specifically for structural applications will often have a longer bow to permit a full width cut at a suitable height for standard beam sizes, while still allowing the cutting of larger box sections.
Except for the very largest examples, the majority of structural sections are cut on pivot bandsaws. When cutting with a pivot saw, the centre of gravity of the bow shifts as it descends, causing it to speed up or slow down at different stages of the cut. To counter this effect, one or more springs are fitted at the back of the bow, although models such as the Sterling SRA440 DGSA feature a hydraulic counterbalance system which is synchronised with the main down-feed cylinder; this gives a more consistent down-feed rate, resulting in better blade life.
Further factors cited as important by Bison Machinery include digital mitre angle scales, and feed pressure adjustment capability.
For further information www.bisonmachinery.co.uk 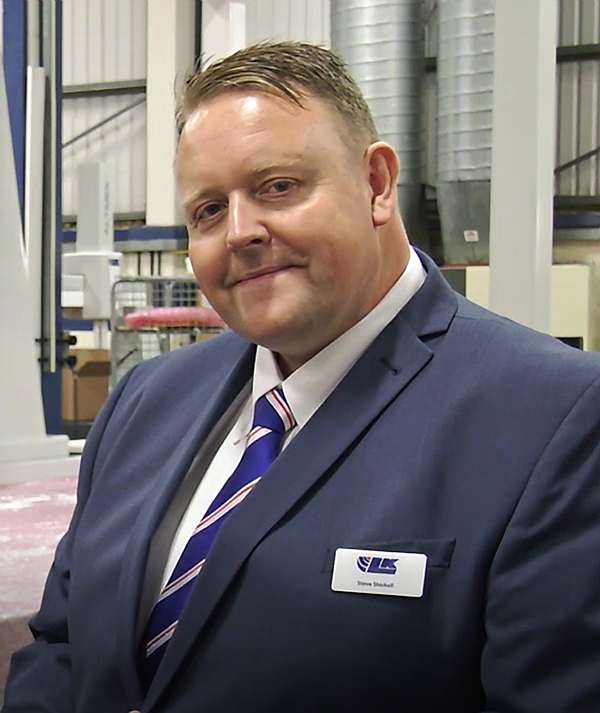 LK Metrology, a British manufacturer and exporter of CMMs, has appointed Steve Shickell as sales and marketing director. 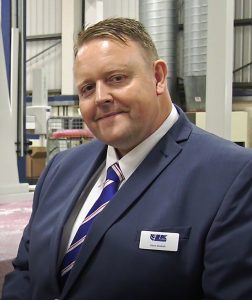 With nearly 30 years’ experience, Shickell started his career in the manufacturing industry, first with British Aerospace as a tool-room machinist, then at BAE Systems, Chester, as a metrology engineer, and afterwards at Airbus UK, Broughton, where he was tool-room team leader. Since then, Shickell has worked for many metrology equipment suppliers, delivering inspection solutions designed to increase productivity through quality control.
For further information www.lkmetrology.com 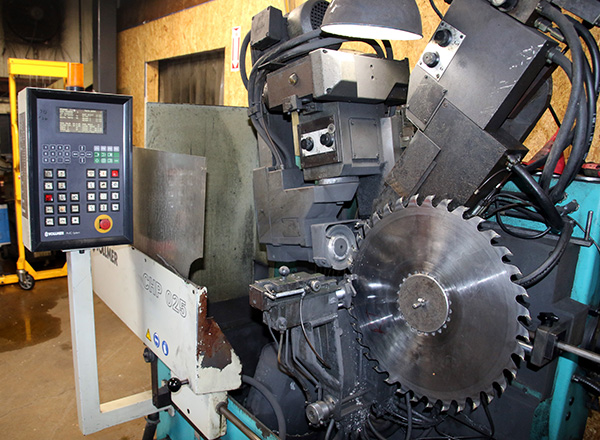 Marking its 60th anniversary, the Sharp Tool Company in Hudson, Massachusetts, is a company that throughout its history has achieved a number of milestones, and in this landmark year the company has purchased five circular saw-blade grinding machines from Vollmer in an investment worth $1m. 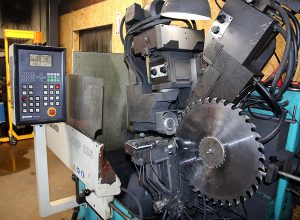 The modern face of the business sees Sharp Tool manufacture upward of 700 saw blades every week, with over 4000 continuously on order and an additional 1000 HSS and carbide-tipped saw blades being serviced every seven days. Sharp Tool also supplies bandsaw blades and flat knives.
Even before orders land in the workshop, the company says it has witnessed a multitude of benefits.
Paul Morette, son of the company’s founder, states: “The surface finish and precision on our saw blades is much better than before. This will improve the service life of products for customers. In addition, by completing face and top grinding in a single set-up, we are improving consistency and overall quality. This has eliminated secondary set-ups and is saving us the equivalent of two employees a year; maybe $100,000 per annum in labour savings, as the guys don’t have to constantly run two machines. It also saves the guys from trying to load heavy 52” blades twice, from one machine to the next.”
From a productivity perspective, the new Vollmer machines are at least 40% faster than the previous Vollmer CHC20 machines they replaced. Factoring in the elimination of multiple set-ups and Sharp Tool Co is realising throughput improvements of 50% or more. The benefit to both the saw manufacturer and its customers is that lead-times will be reduced considerably moving forward.
For further information www.vollmer-group.com 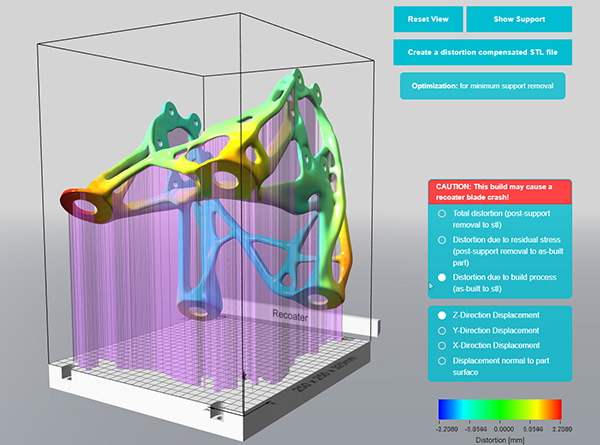 Siemens Digital Industries Software has signed an agreement to acquire Atlas 3D, a developer of software that works with direct metal laser sintering (DMLS) printers to automatically provide design engineers with the optimal print orientation and requisite support structures for additive parts in near real-time. 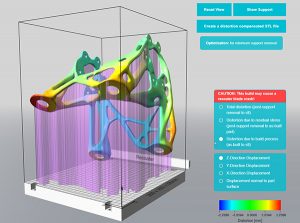 The acquisition will expand the additive manufacturing capabilities in the Xcelerator portfolio of software.
Sunata software by Atlas 3D uses thermal distortion analysis to provide a simple, automated way to optimise part build orientation and generate support structures. This approach allows the designer, rather than the analyst, to perform these simulations, reducing the downstream analysis that needs to be conducted via Simcenter software to achieve a part that meets design requirements.
For further information https://atlas3d.xyz/