SolidCAM UK Ltd, the UK reseller of the SolidCAM and InventorCAM CADCAM software suites, has relocated its technology centre to a more spacious workshop within the premises of Alimex UK Precision in Aluminium Ltd, based in Stonebridge, Milton Keynes.

The decision to relocate came about due to the success of the SolidCAM’s ‘Total Manufacturing Solution’ seminars, which were held throughout this year. The practical shop floor environment will continue to benefit UK customers, partners and resellers attending training and education workshops.
For further information www.solidcamuk.com

A £4m state-of the-art training hub was officially opened earlier this month with bosses urging other manufacturers to step forward to avoid a skills drain caused by the uncertainty of Brexit. The Marches Centre of Manufacturing & Technology (MCMT), which is run by a consortium comprising Classic Motor Cars, Grainger & Worrall, In-Comm Training and Salop Design & Engineering, was unveiled in front of 250 people with many delegates receiving their first glimpse of the 36,000 sq ft facility.

Managing director Matthew Snelson used the event to issue a rallying call for more firms to work together in a bid to stop ‘cannibalising’ the pool of industry talent in the UK: “We need to flood the market with new talent and ensure there are enough individuals to satisfy the growth expectations of industry. There is an urgent need for more skilled labour and that is where we come in by creating a dedicated centre that will deliver more than ‘2020 learning opportunities by 2020’.
For further information www.mcmt.co.uk 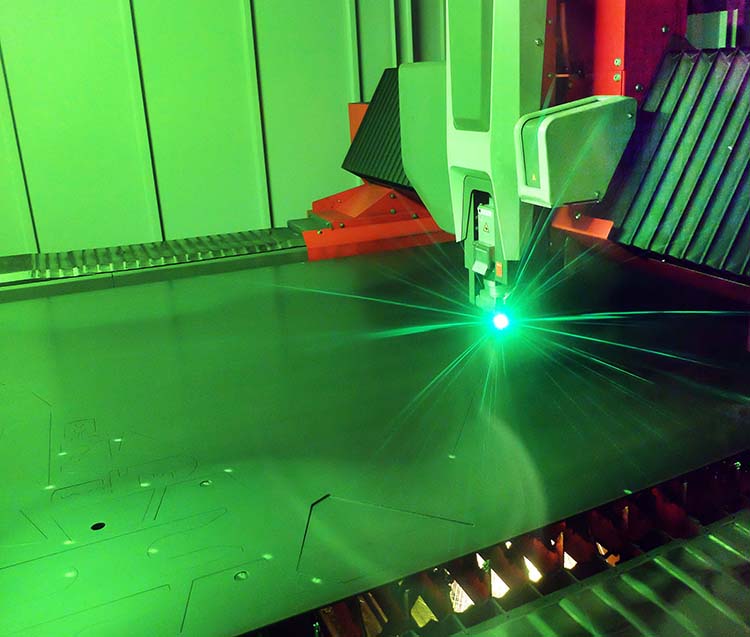 Norfolk-based Eastern Attachments manufactures construction and agricultural attachments, supplying companies such as Persimmon Homes, Taylor Wimpey and JCB. The company says it has not only survived in a competitive market but excelled to become a leader in its fields of operation, a fact that has only been possible using technologically advanced and efficient production at the firm’s factory.
Equipment in use includes a Bystronic 10 kW fibre laser cutting machine with automation to profile components out of mild steel sheet and seven Fanuc robotic welding cells powered by the latest Fronius pulse weld sets to fabricate the products. 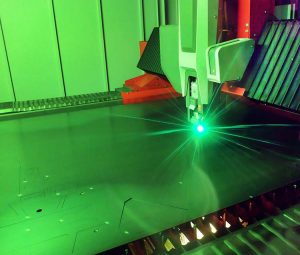 Eastern Attachments director Daniel Leslie, one of four brothers who started the firm in 1996, says: “The UK is known for its strength in high added-value engineering, such as aerospace for example, but there is a perception that we cannot compete with low-wage countries in Eastern Europe and the Far East when it comes to manufacturing relatively low value, simple items.
“In 2007, most handling buckets for construction and agricultural equipment in the UK came from overseas, but today imports are becoming a rarity. Within six months of entering these sectors we had taken half the market for products we manufacture – buckets, handling grabs, forklift attachments and tipping skips – and now produce the vast majority of units sold in the UK.”
His co-director Philip Leslie sheds light on how the manufacturer has been able to succeed so dramatically: “It comes down to constant innovation. We are relentless in our pursuit of improvement, adopting a ‘what box?’ attitude to engineering challenges.
“A key part of this process was the early adoption of high-strength steels from SSAB (Swedish Steel) back in 2002,” he adds. “SSAB continue to invest in the development of new materials, which will soon see even better steels with a strength-to-weight equivalent to that of titanium and higher than aircraft aluminium.”
Attachments can be made considerably lighter using these materials, so a construction firm or farmer can lift more material to achieve higher productivity, or downsize the machine to reduce capital expenditure. A spin-off advantage of these high-strength steels is fewer impurities such as silicon, which is beneficial for achieving better edge quality when laser cutting, especially 12 mm and under (when using nitrogen rather than oxygen as the cutting gas). 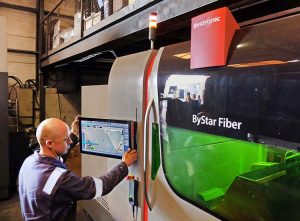 Such comprehensive penetration of the attachments sector has resulted in the company growing by an average of 15% annually for the past 10 years, but 2017 has been a bumper year with an increase in turnover of over 30%. It is an enviable position but presented the Leslie brothers with the problem of how to keep pace with such a sharp upturn in demand. The situation was particularly acute in the sheet preparation department, where two high-definition CNC plasma cutters were struggling to meet the required output.
The directors had foreseen the situation and recognised three years ago that laser profiling was the way to go. They were waiting for fibre laser cutting to mature, having dismissed CO2 lasers as yesterday’s technology. When Bystronic launched the first-ever high-power 10 kW fibre laser machine at the end of 2016, which is capable of cutting up to 25 mm mild steel, they decided it was time to act.
Three other potential fibre laser machine suppliers were considered before the ByStar Fiber 3015 was purchased. The Swiss-built Bystronic machine was deemed to be preferable, due not only to what at the time was its uniquely high power, but also to its quality build and complimentary comments from other users.
A further advantage was the 30-plus service engineers employed by Bystronic UK. Eastern Attachments was already aware of the effectiveness of the supplier’s service department, having used the company’s shearing and press braking machines for several years. Prompt service to maintain high uptime of the ByStar Fiber 3015 is crucial, as it produces nearly all attachment components in the Norfolk facility, with the one remaining plasma machine cutting a small amount of material up to 40 mm thick.
The 3 x 1.5 m capacity fibre laser cutter, equipped with a ByTrans Cross for sheet storage and automated material handling to and from the machine, was installed at the beginning of summer 2017, just in time to prevent the need for a second shift on the two manually-loaded plasma cutters. The scale of the difficulty Eastern Attachments was facing can be gauged from the fact that its current factory was built to manufacture 900 units per month, yet in September this year more than 2000 units were produced. 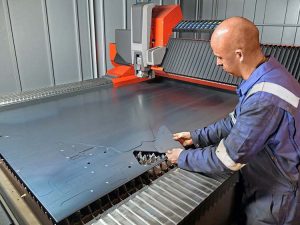 Achieving more than double the originally planned output was only possible due to automation of the fibre laser cutter. Leslie estimates that the cell, which runs around the clock with eight hours of operator attendance, can typically produce as much in 24 hours as a manually loaded plasma machine produces in five 8-hour day shifts.
When processing mild steel 5 mm thick or less, the productivity improvement is much higher. The sheer speed of fibre laser cutting means that what would take eight hours on a plasma cutter can be achieved in one hour by the fibre laser cell. Even on thicker gauges, where laser cutting speed is broadly similar to that of a plasma machine, the Bystronic saves time through faster rapid traverse from pierce to pierce and automated loading and unloading of sheet in under one minute, compared with 20 minutes manual load/unload on a non-automated machine.
“The Bystronic has allowed us to increase cut part production dramatically in a small footprint, at the same time raising dimensional accuracy and edge quality,” says Leslie. “Fabrication is easier, the end products are improved and rework is eliminated.
“We are about to build a new factory nearby that will be four times the size of our existing facility and we’ll be moving within two years,” he continues. “It will allow us to expand even faster into new markets, grow our exports and prevent us from turning away work through lack of production capacity.”
In addition to product manufacturing, the company offers a skilled fabrication service. From a single specialist item to fully automated production runs, Eastern Attachments offers assistance with design work and technically challenging problems. Furthermore, the company can help reduce costs and improve specifications by utilising high-strength steels and advanced production techniques.
Over the years, projects have included TV and stage work, sculptures and showcase stairways, materials handling equipment, structural steelwork, stadium seating, precision automated jigs, robotic manipulators, fabrication of offshore equipment and a multitude of work for local authorities.
For further information www.bystronic.co.uk 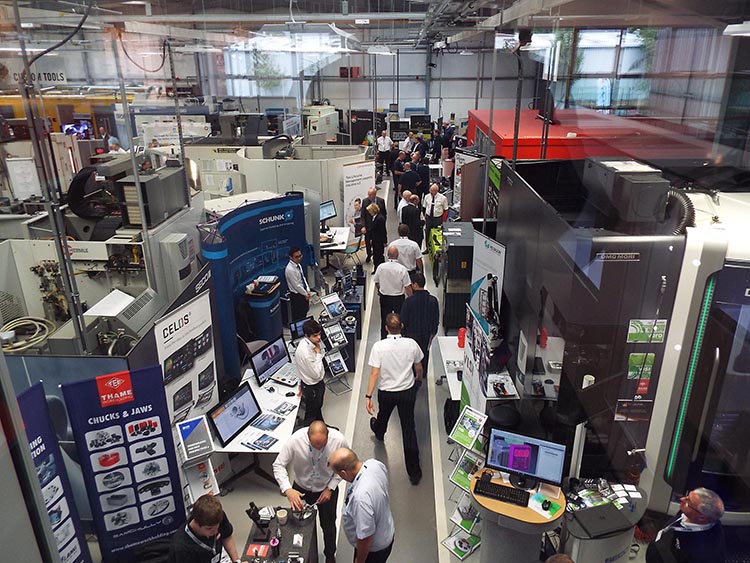 Seco Tools (UK) has reported that its recently-held ‘Inspiration through Innovation’ open house was a huge success with over 715 visitors attending the event over the two days. Now in its fourth year, highlights of Inspiration through Innovation included: 11 machining demonstrations; nine best-practice seminars led by industry experts; and over 50 technical partners showcasing their latest products, services and technology solutions. 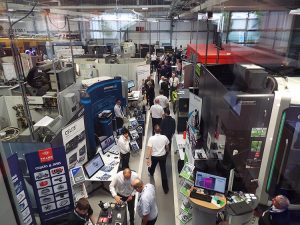 “Our objective with Inspiration through Innovation has always been to create an inspiring and practical event that is truly customer-focused and demonstrates to visitors and partners alike that significant improvements in productivity, quality and performance can be achieved through collaboration and sharing best practice,” says Richard Jelfs, the company’s managing director.
For further information www.secotools.com 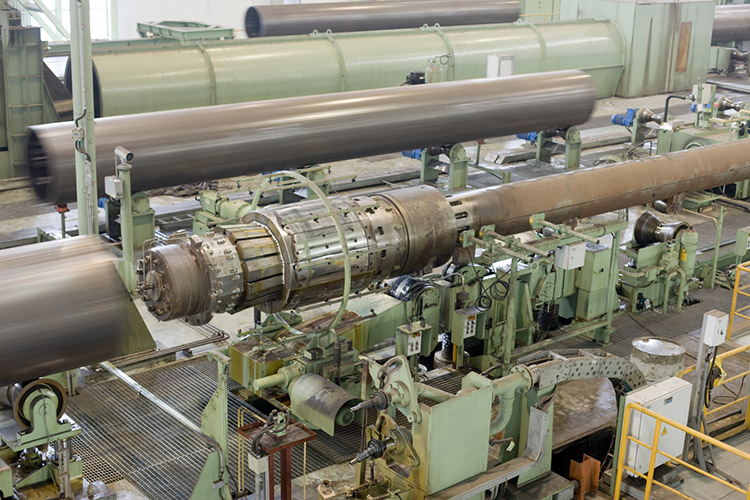 Global Pipe Company (GPC), based in Jubail, Saudi Arabia, has placed an order with the SMS Group for the supply of a mechanical expander and a hydrostatic pipe tester for its new manufacturing line that will double the company’s annual production capacity from 200,000 tons to 400,000 tons. “With a total of 17 expander machines installed since 2002 and 19 hydrotesters supplied since 1971, SMS Group presented us with strong references in pipe mills offering a similar scope of business as ours,” says Ahmed Hamed AL Khonaini, shareholder and managing director of GPC.


The new 10 MN mechanical expander will be installed in the finishing area of the new line. In addition to stress relieving the welded pipes, the expander will give GPC’s products their final shape, ensuring that the dimensions are within the required range according to the applicable specifications. “By doubling our nominal capacity to 400,000 tons, we will be in a position to allocate production slots for neighbouring markets within the GCC and MENA regions without neglecting our home market,” says Khonaini.
For further information www.sms-group.com
Page 4 of 15« First«...23456...10...»Last »
We'd like to use cookies to improve your experience when using our website, to track usage statistics, and to show relevant ads to you when browsing other websites. You can review the cookies we use and our updated
Privacy Policy
I Accept