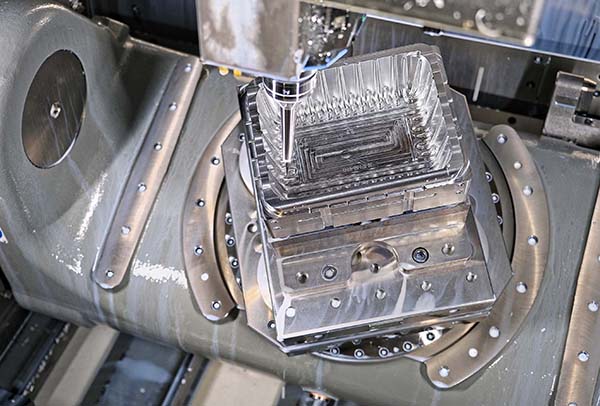 The tool-making division of Gateshead-based TDX, which supplies services and tools to the thin-film plastic thermoforming industry, mainly for food packaging applications, has started to automate its machine shop. The latest purchase is a German-built Hermle five-axis machining centre with a 20-pallet storage system installed by UK agent Kingsbury, which is now working 24/7. 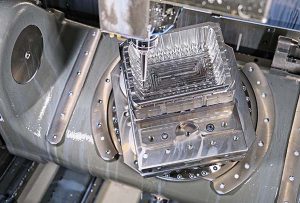 Two members of the management buyout team that purchased TDX in 2013, Neil Atkinson and David Renton, were especially pleased to progress the investment. Five-axis machining was usually the bottleneck at the 24,000 sq ft tool-making facility, and it normally fell to the two directors to go into the factory two or three times on both Saturday and Sunday to change over five non-automated five-axis machining centres.
Since the Hermle C250 with linked HSFlex automated pallet change system entered production, weekend visits have been unnecessary. Each aluminium thermoforming mould billet is pre-machined on one face and then milled on the other five sides internally and externally in one operation in from four to six hours. So 20 pallets equates to an average of 100 hours’ machining on the Hermle, which is more than enough to keep the production cell busy non-stop from Friday afternoon to Monday morning.
Atkinson says: “The automated milling cell has not only eliminated manual intervention at weekends, but requires minimal attendance during the week, releasing the operator for other tasks. We approached six potential suppliers, all of which carried out machining trials. Kingsbury demonstrated the fastest cycle time on the Hermle, approximately 10% quicker than the best of the others. Surface finish was also better.”
For further information www.kingsburyuk.com