Faro Technologies is releasing its next-generation Vantage laser tracker six degrees of freedom (6DoF) probe. The new 6Probe offers portability and is compatible with Faro Vantage S6 and E6 laser trackers, enabling users to build, inspect and measure products faster and with greater accuracy. In fact, Faro reports that typical users of the new 6Probe can now save at least 30 minutes of time on any given workday.

With kinematic self-identifying styli, users can now change probing tips quickly and measure without any recalibration, while also measuring hidden areas outside of the tracker’s line of sight with wider acceptance angles.

Faro ActiveSeek, a feature to automatically locate and follow the active target, enhances 6DoF and standard probing. Trackers from Faro support the patented Super 6DoF TrackArm solution, which allows the Vantage and one or more Faro ScanArms to work together, thus creating an integrated contact and non-contact 3D measurement system for large-volume measurement. With a range of up to 60 m (with a 4 m reach), Super 6DoF eliminates line-of-sight challenges and expands measurement range while maintaining accuracy, says the company. 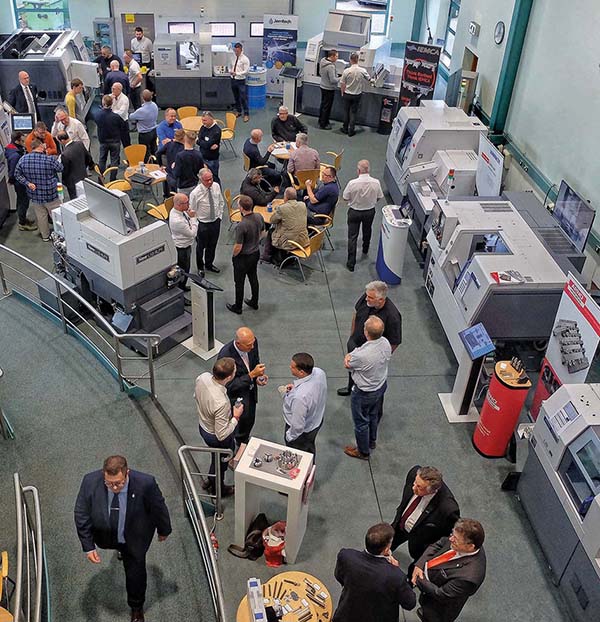 The degree of customisation that Citizen Machinery is being asked to engineer into the machines and equipment it supplies has now reached such a high level that the company has decided to centralise this side of the business by setting up a dedicated centre, CMSolutions, at its Bushey headquarters in Hertfordshire. CMSolutions operates independently from the applications department to project-manage complex, high-level installations, from initial consultation, through design, configuration, assembly and prove-out, to delivery, acceptance and training. 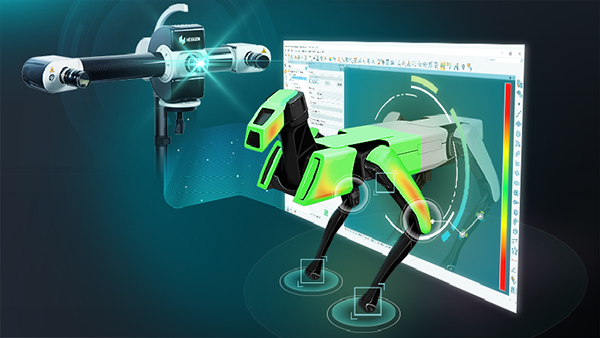 Hexagon’s Manufacturing Intelligence division is launching a new software plug-in that will allow full operation of Hexagon structured light scanning systems from within the third-party inspection software platform PolyWorks, developed by InnovMetric Software. This move represents the first implementation of a new SDK released by Hexagon that allows a third-party software environment to take full hardware control of any of the company’s structured light scanners.

The SLS-PW plug-in, and any subsequently developed plug-ins, will let users streamline their scanning and inspection workflow into a single software environment, with clear productivity benefits. Notably, the increased efficiency of a single platform workflow will reduce inspection times by eliminating the need to export and import measurement data between separate programs, as well as by minimising training needs.

When added to the existing versatility of the PolyWorks platform, the SLS-PW plug-in delivers a flexible solution for companies that run a range of metrology hardware and wish to simplify their workflows. 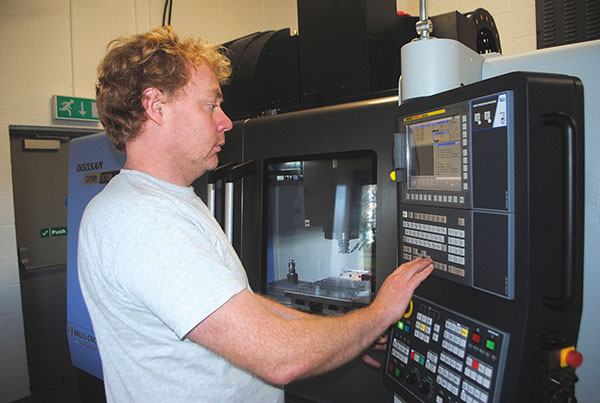 The machine, a Fanuc-controlled Doosan DNM 5700 is now producing complex, high-precision components at the company’s 120 sq m modern manufacturing facility on the outskirts of Banbury. These parts, made from aluminium, steel, stainless steels and plastics, must meet exacting geometric tolerances and surface finishes. Components produced to date include: prototypes and one-off test equipment/test rig parts for motorsport customers; pre-production and low-volume components for motorsport and automotive customers; and precision prismatic parts (required in higher volumes) for a cabinet maker.

Owner and managing director Matt North established MRN Engineering in 2014. The company initially started trading as a specialist engineering design consultancy working on a contract basis with a number of blue-chip motorsport companies. The main focus of the company’s operations back then was in the research, development and design of specific test equipment, such as for examining and measuring the strength, durability and safety of components and assemblies.

At the end of its latest contract in June 2020, and with the pandemic outbreak impacting on its ability to secure new contract work, North decided to make his long-term vision for the company a reality. He began by making plans to augment MRN Engineering’s range of services through the addition of high-end and bespoke manufacturing and machining capabilities.

“I had always intended the company to develop and grow, and become a ‘one-stop-shop’ solutions provider,” he says. “COVID-19 acted as the catalyst and, from June 2020, I set about building and launching the machining/manufacturing arm of the company.”

To all intents and purposes, although not starting entirely from scratch, the decision to significantly expand MRN Engineering’s services and capabilities involved a similar level of preparation and planning required of any new business start-up.

The first few months (from June to September 2020) firstly involved creating a robust business plan, setting out the company’s aims and objectives, financial predictions, market analysis, and product and service differentiators. North then began identifying the right location and suitable premises for the new business, before investing in the right advanced technologies, commensurate with the company’s vision, aims and objectives. 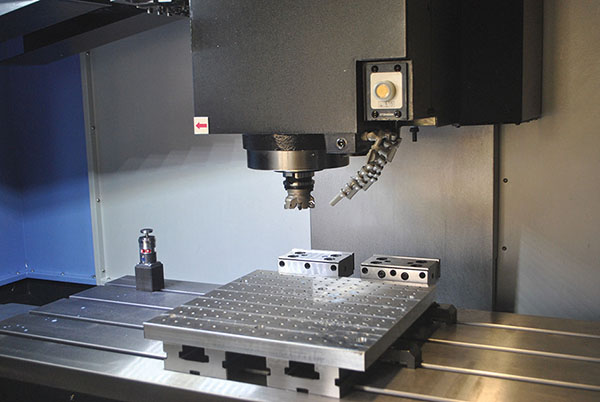 MRN Engineering’s vision was, and still is, to provide customers with a specialist design and manufacturing service. The company’s initial and main focus would be on the motorsport sector, and involve the design and manufacture of test equipment, as well as customised and prototype parts.

Explains North: “Essentially, I was playing to my strengths – combining my design engineering knowledge and experience with my manufacturing/production know-how to create a unique offering. Having worked in the motorsport and automotive sectors for a considerable number of years I knew the market. I had also established strong relationships and enjoyed a good reputation with key decision makers in a number of ‘target’ companies. In short, I was confident that providing a seamless ‘design-to-manufacturing’ service would be a success.”

The decision to operate from the outskirts of Banbury in Oxfordshire was prompted by a number of reasons, including proximity to a number of UK-based motorsport companies and their supply chains.

“Although I already knew the location well, I did spend considerable time inspecting and selecting the most suitable premises in terms of size, services and facilities, cost, and communication and transport links,” says North. “Finding the right premises was a critically important decision, among many others.” 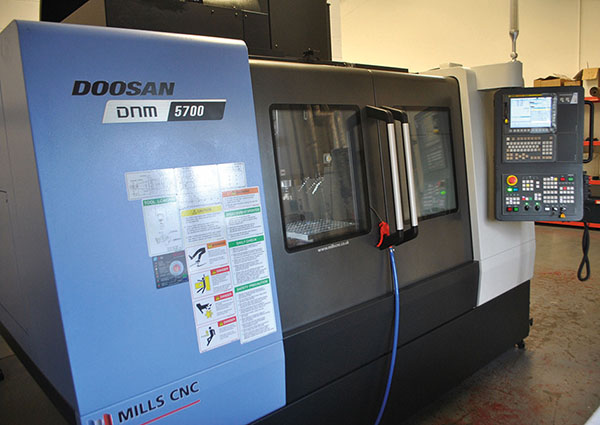 “Right from the outset I made the decision to invest in a ‘new’ as opposed to a ‘pre-owned’ machine tool,” says North. “Although there are no doubt some great used machines on the market, the price/cost differential between a good, well looked after used machine and a new one, wasn’t as big as I thought. I also believed that the company’s reputation in the motorsport sector, with its emphasis on high accuracy and repeatability, and the incredibly short lead times involved, would be best served through the acquisition of a new, more reliable machine.”

Having decided on a new machine, North then researched the market to identify the most suitable machining centre and machine tool supplier.

Says North: “I could have gone for something smaller and for a machine that didn’t offer the same high specification as the DNM 5700. However, I needed a machine that was big and powerful enough to machine large, complex, high-precision prototype parts often involving long cycle times, as well as one that could produce multiple parts, quickly, in a single set-up.”

He continues: “Having researched the market and spoken to a number of colleagues and peers, who extolled the virtues of Mills CNC – in particular the company’s aftersales service and support – I discussed my requirements with the sales and technical staff at Mills and made the decision to invest in the Doosan DNM 5700.”

Since installation at MRN, the new DNM 5700 has not missed a beat. As intended, it is machining low-volume, high-precision prototypes and parts for the motorsport sector, as well as higher volume production parts for a number of customers in other industries.

“I wasn’t really expecting to be earning money during the first three months of operation – but I have exceeded these expectations – in no small part down to the acquisition of the DNM 5700,” concludes North. “To further improve our productivity and re-emphasise our commitment to quality, we have recently invested in a CMM and, in the near future, will look to strengthen our machining and manufacturing capabilities still further.” 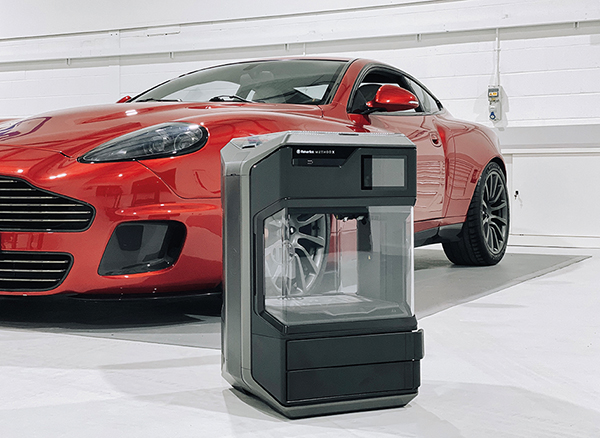 Stratasys subsidiary MakerBot, a specialist in 3D printing, has supplied automotive and lifestyle product design and engineering firm, Callum, with a Method X 3D printer. The machine will produce functional prototypes, tooling and production parts across a number of luxury vehicles and lifestyle brands, including the limited edition Aston Martin Callum Vanquish 25 by R-Reforged.

Adam Donfrancesco, technical director at Warwick-based Callum, says: “Having put the 3D printer through its paces, the level of part accuracy and diversity of engineering-grade materials available is second-to-none versus other industrial desktop printers we’ve tested. Not only does this technology enable us to enhance our prototyping capabilities for true functional testing, but we can now optimise the production of tools and end-use parts where 3D printing previously fell short in terms of strength, surface finish and dimensional accuracy.”