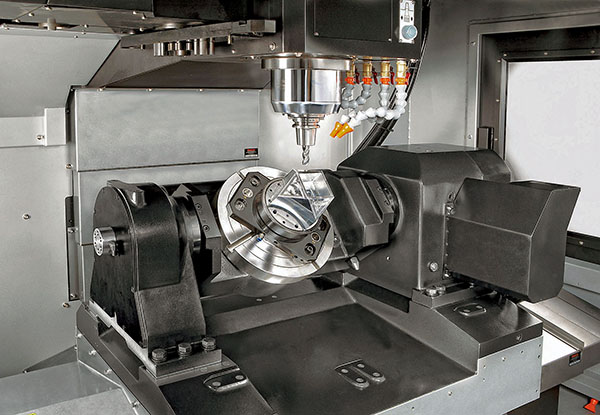 Machine shops looking to progress from three- or four-axis CNC prismatic metalcutting and invest in a five-axis facility can now consider the affordable UQ400 vertical-spindle machining centre from Wele of Taiwan, whose machine tools have been offered in the UK and Ireland since mid-2018 under a sole agency agreement with Whitehouse Machine Tools. Wele is part-owned by Japanese machine tool manufacturer, Toyoda. 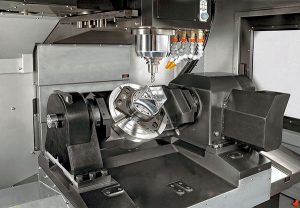 Wele’s UQ400 has an installed weight of 6.5 tonnes and occupies a compact footprint of 2.95 x 2.35 m. Capable of interpolating four of the five axes simultaneously, it is intended for the five-face machining of workpieces weighing up to 200 kg (with fixture). A Fanuc 0iMF control allows an easy gateway into five-axis operations for users more familiar with this CNC system than others on the market.
The working envelope is defined by 400 x 650 x 485 mm ballscrew-driven travels in X, Y and Z, together with two rotary, hydraulically clamped axes, which are facilitated by a 360° C-axis table and a +30/-120° A-axis swivelling trunnion.
The BT40 direct-drive spindle, served with cutters exchanged from a 24-station tool magazine, offers 11 kW of continuous power (15 kW for 30 minutes) and speeds up to 12,000 rpm, or optionally 15,000 or 20,000 rpm (HSK-A63). High production output is assured by a cutting feed rate of 10 m/min, and rapids of 36 m/min in X, 24 m/min in Y and 10 m/min in Z.
Standard equipment includes chip wash-down for the table and twin augers in the Y axis, plus one in the X axis to evacuate swarf, while bed wash-down and different styles of chip conveyor are available.
For further information www.wmtcnc.com 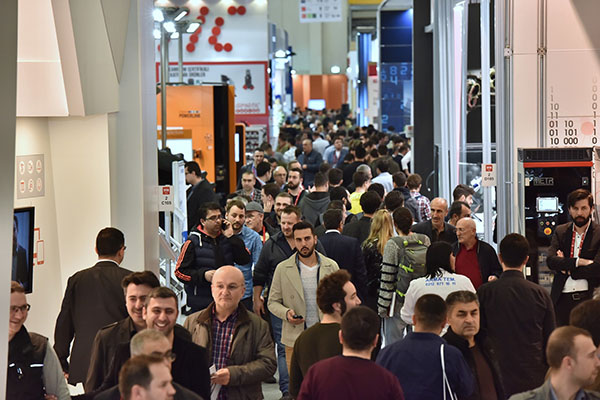 WIN Eurasia 2019, which is organised by Hannover Fairs Turkey, is the largest B2B trade fair of its type in Turkey and across the Eurasia region. 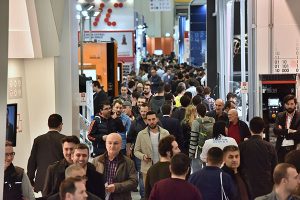 Taking place on 14-17 March at the TÜYAP Fair and Exhibition Centre in Istanbul, the 26th edition of the show will once again bring together manufacturers from all around the world. Innovations will be included from sectors such as metalworking, automation, motion/drive systems, surface treatment, welding and many more. Last year, WIN Eurasia was attended by over 75,000 sector professionals from 146 countries.
The Association of Turkish Machine Manufacturers will be supporting WIN Eurasia 2019. In fact, some 2000 local brands will exhibit at the show. As always, MTI will be present at the event in Booth A, where the company’s friendly staff will be busy handing out copies of the show issue to visitors. All are welcome to call by the stand for an informal chat about the industry’s most expedient way of buying and selling machine tools and associated technologies.
For further information www.win-eurasia.com 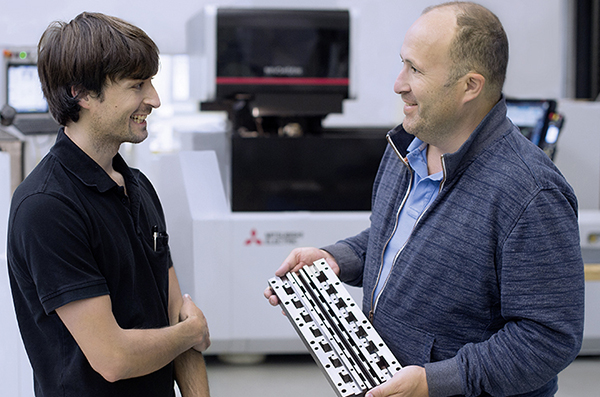 Building on its successful company history, Neubeck & Wiedemann GmbH is well equipped and firmly established in the marketplace as a metalworking specialist. For the past eight years, wire-cutting machines from Mitsubishi Electric have had a major hand in this. 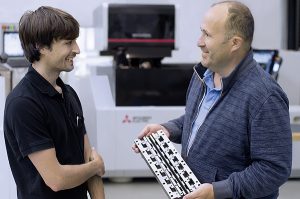 Based in Stockach, Germany, Neubeck & Wiedemann houses over 30 machine tools and 40 employees mainly producing precision components as one-offs or in series, as well as punching tools for toolmaking and the production of jigs and fixtures.
On a customer’s recommendation to integrate wire EDM technology in production, the company purchased a used Mitsubishi Electric wire-cutting machine in 2011. Jürgen Läufle, managing director, says: “This gave us an excellent opportunity to launch production in this area. The support from Mitsubishi Electric was quick and outstanding. We got off to a very fast start with the used machine. Within four to six weeks we were able to product parts without assistance. However, after two years we found that the used machine was no longer able to cope with the workload.”
The volume of orders called for investment in the first new wire EDM, an MV2400S from Mitsubishi Electric. Sometime later there was another bottleneck, and the second new machine from the Japanese manufacturer, a MV2400R Connect, was installed – it has been in operation at Neubeck & Wiedemann for the past year. The high workload of the wire-cutting machines has been fuelled by press manufacturer Schuler and demand from the company’s own punching tool activities, such as for the production of dies, punches and die plates.
The company uses coated and uncoated standard brass wire, usually of 0.25 mm diameter.
For further information www.mitsubishi-edm.de 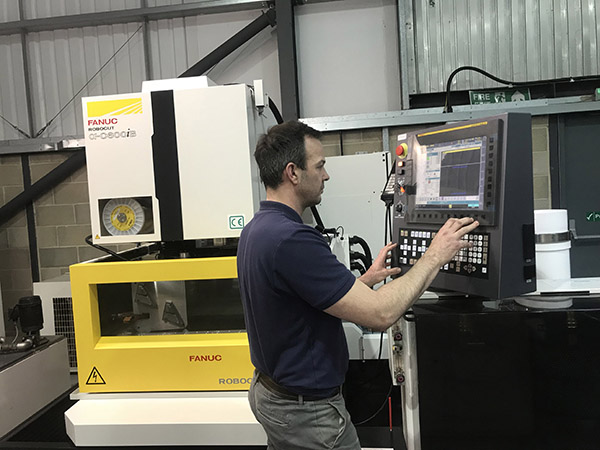 At Petersfield-based Frazer Nash Manufacturing, the company has invested in its fourth Fanuc wire EDM, a RoboCut C600iB, which complements existing RoboCut 0C and 1C machines that have been running on the shop floor since the early 1990s. 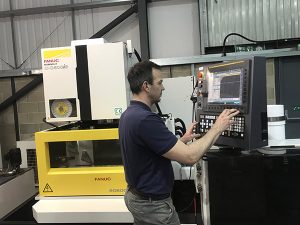 EDM supervisor at Fraser Nash Manufacturing, Hayden Weeks, says: “We added the latest Fanuc RoboCut C600iB as we were looking for a machine that could accept larger parts. Moreover, some of our other machines are getting a little old now, so the new addition really speeds things up. The C600iB is at least 20 to 30% faster than our existing machines.
“Much of our work is in the food industry, so we do a lot of aluminium and titanium plates,” adds Weeks. “On the new machine at present is a 3D-printed alloy steel part and we’re cutting off the 3D printed base. From here, the job will go to five-axis machining.”
Programming of the machines is performed off-line using Fanuc CAMi software, which helps Frazer Nash perform cylindrical, conical and four-axis machining routines. Users can mirror CAMi software directly to the CNC screen by using the remote desktop function.
Fanuc’s B series has a host of newly developed features, and one in particular caught the attention of Frazer Nash: the EDM hole-drilling attachment. This bolt-on addition enables users to drill holes from 0.3 to 3.0 mm diameter through hardened steels and other challenging material types.
“An advantage of this system is that you don’t need to drill a plate before treatment or before it’s put on the wire machine,” says Weeks. “We load jobs straight on the machine, where the attachment will drill the hole. We can then centre-find the hole and feed the wire in for cutting operations.”
For further information www.fanuc.eu 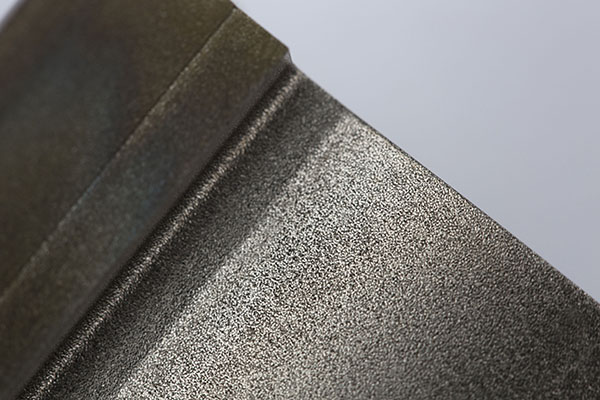 GF Machining Solutions’ die-sink machines are equipped with 3DS, an intelligent surface texturing technology that reduces friction on the surface area of moulds and, as a consequence, enables injection-moulded parts manufacturers to improve their productivity and performance. 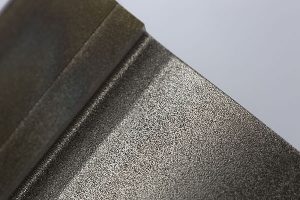 Injection moulding process productivity can be compromised by de-moulding issues caused in many instances by increasing part and polymer complexity. An effective and traditional way of overcoming these issues is to apply coatings to the mould surface, which reduce adhesion and friction, enabling moulded parts to be ejected quickly. This coating process occurs after the machining operations have been completed and, as such, adds time and cost to the whole manufacturing process.
A new, less time-consuming approach using advanced EDM die-sinking technology has been developed by GF Machining Solutions. In essence, the new approach can be adopted by mould makers with access to the company’s latest AgieCharmilles Form P and Form X die-sinking machines, which are equipped with the high-performance and digital Intelligent Speed Power Generator (ISPG) and 3DS, an on-board, intelligent surface texturing technology that can be accessed directly from the machines’ HMI control.
3DS technology smoothes the distance between the peaks and valleys on the mould surface, but not to a point where the peaks are eliminated. The technology stretches the surface RMS (root mean square) value without affecting the Ra value and, because the peaks are more evenly spread on the surface that is created in the mould, prevents sticking.
Owing to the reduced surface friction, moulds can be filled faster (shaving seconds off the moulding process) and moulded parts can be ejected quickly and effortlessly.
For manufacturers that make millions of injection-moulded parts, this capability enables significant cycle time reductions and the potential to make hundreds of thousands of additional parts.
For further information www.gfms.com