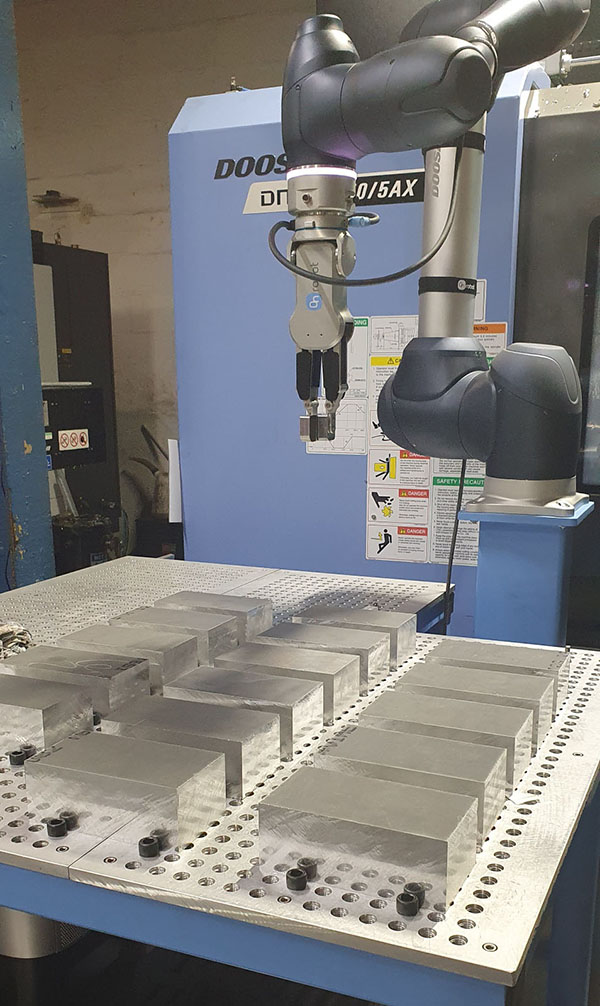 Mills CNC Automation has recently supplied a new Doosan collaborative robot (cobot) to NPI Solutions Ltd, a precision subcontractor based in Irvine, Ayrshire. The M1013 cobot, with its 1.3 m reach radius and 10 kg payload, is integrated with a Doosan DNM 350 5AX five-axis machining centre previously acquired from Mills CNC in 2016. Since installation, the cobot has proved its worth by helping NPI to optimise the spindle uptime on the Doosan machine, minimising operator interventions and improving output.

NPI is a company committed to continuous improvement and best practice. As such, the business regularly monitors, collects and analyses machine-tool performance data; calculating the effectiveness and efficiency (OEE) of the equipment it uses. The objectives are to accurately identify production ‘pinch points’, to remove and/or reduce the issues that cause machine downtime, and make manufacturing processes as productive as possible.

Says NPI’s managing director Kevin Priestley: “We invested in a Doosan five-axis machining centre five years ago to make us more productive, efficient and competitive. The ability to machine precision parts in one set-up, via 3+2 and 4+1 machining, was the appeal…and the goal.”

However, analysis of the machine’s performance over a period of time revealed that it was failing to deliver the expected results. 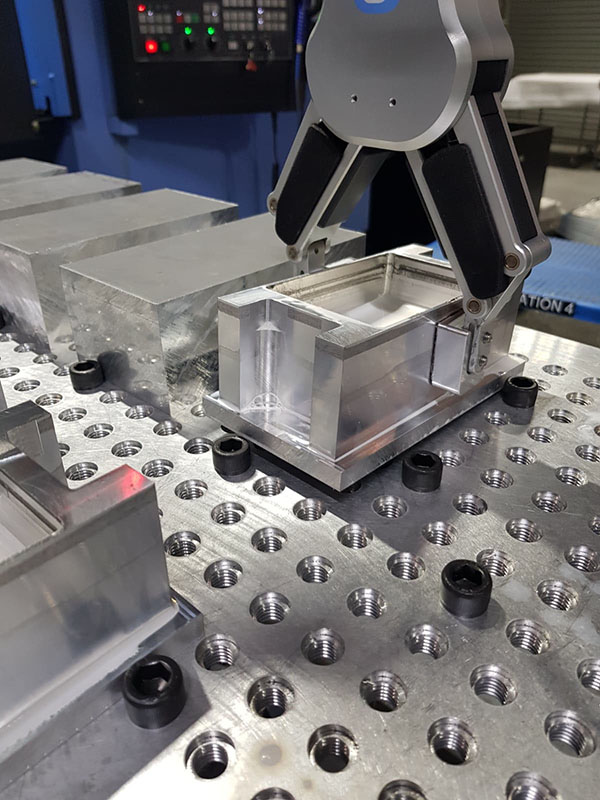 “It wasn’t the machine’s fault,” explains Priestley. “It was directly related to the type of production work we do, which is characterised by low volumes and small batches, and by short part cycle times.”

Being a high-mix, low-volume component manufacturer meant that the DNM 350 5AX could be idle for long periods each day to allow for frequent job set ups and changeovers.

“Machines don’t make money if they are not making chips,” states Priestley. “To improve our profitability we needed to increase the spindle uptime on our DNM 350 5AX.”

The company subsequently began to explore automation as a means of improving the machine’s utilisation and output.

Says Priestley: “There were a number of potential automation solutions available. We looked at automatic workpiece pallet-change systems and industrial robots, but their cost, floor-space requirements and complexity ruled them out.”

NPI required a more economically-viable and ‘simpler’ solution: one offering quick installation to transform the DNM 350 5AX into a flexible, automated manufacturing cell.

“We had investigated cobot technology before,” remembers Priestley. “The versatility of cobots in addition to their safety, their relatively lower investment cost and ease of deployment were attractive propositions. When we found out that Mills CNC, through its newly-created Automation Division, could supply us with not only a Doosan cobot but also project manage and undertake its installation and provide comprehensive training and applications support – we decided to put our plans into action. We visited Mills CNC Automation’s facility in Leamington to meet the application engineering team and discuss our specific requirements in more detail. Ultimately we gave the ‘green light’ to the investment.” 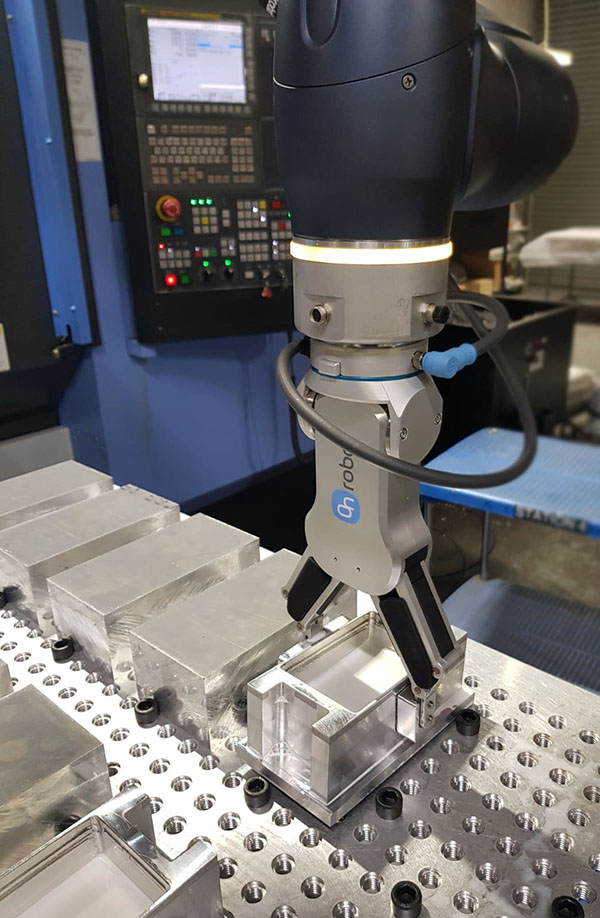 To undertake what are essentially machine-tending operations, NPI worked alongside Mills CNC Automation engineers to select the right cobot for the job. The chosen cobot (based on the dimensions and weight of parts machined on the DNM 350 5AX) was the M1013 model.

Offering a 10 kg maximum payload and 1.3 m reach, the M1013 also features six high-torque sensors that provide ‘best-in-class’ collision protection. The M1013 was supplied with a controller, a teach pendant, an RG6 (OnRobot) gripper and a Schunk work-holding package.

Situated adjacent to the DNM 350 5AX which, as part of the installation was fitted with an automatic door opening/closing facility, the cobot is programmed to pick up blanks positioned on a peg table and load them, in turn, into the machine where they are machined to completion.
Once machining operations are complete, the cobot takes the finished component from the machine and places it back on the peg board in its predetermined position. This cycle then repeats, with no operator intervention, until the completion of all parts.

Parts machined on the DNM 350 5AX are typically made from aluminium. These components vary in size from 15 x 15 x 15 mm at one end of the spectrum, through to 150 x 150 x 20 mm at the other. Cycle times can be as short as 2 minutes, or up to 60 minutes depending on part size, complexity and features.

“The ambition to create a flexible automated manufacturing cell has been realised through the cobot investment,” says Priestley. “During the day, the cell is programmed to machine components (with relatively short cycle times) unattended, allowing operators to work on other machines or perform other tasks. For parts with longer cycle times the cell is programmed to run attended overnight.”

NPI’s new cobot cell has helped it improve productivity, efficiency and competitiveness. The DNM 350 5AX is now running at 85% efficiency as opposed to just 50% efficiency prior to the cobot investment.

NPI is quick to acknowledge the skill and expertise of Mills CNC Automation’s engineers in designing and installing its new flexible automated manufacturing cell.

Says Priestley: “Everything went smoothly, from the design of the system through to its installation, proving out, and on-site and remote training. Mills CNC Automation took the time to understand our requirements. They demonstrated [up front] the productivity gains we could expect to realise from the investment – and they have been proven right. The support they provided throughout the project was first class, and I can’t recommend them highly enough.”

NPI’s automated cobot cell has now been operational for six months. Such have been the productivity and efficiency improvements realised that the company is now actively considering investing in a second cobot.

Concludes Priestley: “Despite the pandemic and subsequent lockdowns, we’ve been unbelievably busy over the past 12 months. To meet demand from customers for our precision machining services, we will be investing in more automation in the near future.”