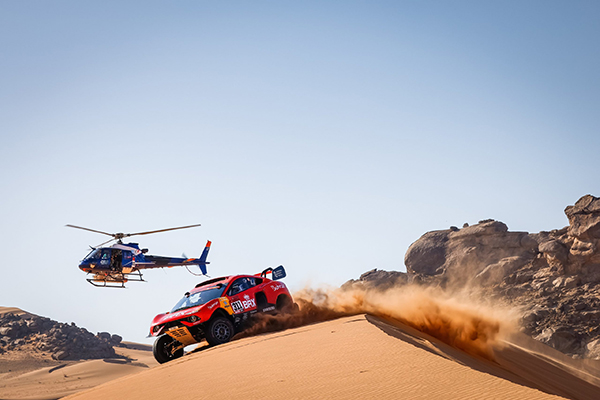 Prodrive has a long history in motorsports, competing and winning its first event, the Qatar International Rally, in 1984. Since then, the company has been unstoppable, winning a multitude of titles across a wide range of motorsport disciplines.

Earlier this year, the company entered the Dakar Rally in partnership with the Kingdom of Bahrain, under the new team, Bahrain Raid Xtreme (BRX). The Dakar Rally takes place over two weeks, with stages covering hundreds of miles across a range of challenging, off-road terrain in Saudi Arabia.

To prepare for the event, the BRX team began development on the Hunter T1, its new two-car factory team driven by nine times World Rally champion Sébastien Loeb, and 25 times Dakar Rally legend Nani Roma. Roma secured fifth place overall in the 2021 race, the first time any team has achieved such a high ranking on its first attempt at the Dakar Rally.

With work only beginning in late 2019, the BRX team suddenly came up against what would be one of the biggest challenges that hit the industry thus far.

“We often put ourselves in tough positions time-wise, but Covid-19 really threw a wrench in our already-tight timeline,” says Paul Doe, chief engineer at Prodrive. “In the UK, there was a lockdown that effectively forced us to close the factory for a while. Development that should have taken about a year was compressed into nine months. Instead of testing in July, we didn’t end up turning a wheel on a car until October 2020.”

With the Dakar Rally scheduled for the first two weeks of January 2021, this put an immense amount of pressure on the whole team. Although BRX includes 40 people to design, engineer, service and operate the Hunter T1 vehicles, the team was stretched thin with an atypically shorter timeline. Additionally, although Prodrive offered in-house manufacturing, fabricating and machining capabilities, the team was competing for resources with other projects.

When Doe decided to add the MakerBot Method X 3D printer, recommended by DSM (a global supplier of carbon-fibre materials), to his team’s toolbox, it became a game changer. The Method X enabled his team to prototype and print much-needed parts quickly and conveniently as well as experiment with different applications, on and off the course. With the unlimited possibilities of additive manufacturing, prototyping and part production became much more streamlined and cost-efficient. 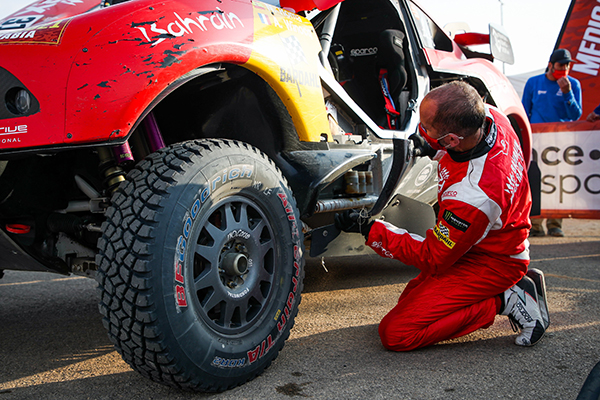 Innovation has always been a core tenet at Prodrive. The company utilises a wide range of technology to ensure it stays ahead of the competition. Adding Method X to its repertoire of cutting-edge technologies afforded Prodrive an added opportunity to save even more time during its shortened production schedule.

“There is a massive list of benefits from using the MakerBot Method X compared with a normal production method, such as speed and responsiveness,” explains Doe. “When it came to designing parts on the car, the first thought often starts with printing a component off the 3D printer to see how it would turn out. The ability to try the part first before committing to the final product allows us to make changes easily and quickly. This rapid iteration also allows us to stay pretty close to our production timeline, while saving a ton of money.”

With two Method X 3D printers, the BRX team was able to engineer some parts at the factory in the UK as well as on site at the rally.

A Method X was loaded on to one of the BRX maintenance trucks that the team had set up in the desert. The printer was used on-site to produce fabricated parts, or to fix a component that would otherwise have needed steel or aluminium fabrication.

“We carried this machine with us in the truck and printed remotely in the middle of nowhere – literally where you can’t see traces of civilization – yet here we are using this kind of machine,” says Doe. “We took advantage of the speed of 3D printing parts in the middle of our test programme”.

The BRX team used Method X to print over 30 parts on the Hunter T1, including a mount for a suspension position sensor and a sculpted nozzle mount for the cockpit’s fire suppression system. Of particular note, the suspension position sensor allowed the engineers to look at the damper performance, vehicle dynamics, wheel alignment, drive shaft and more. The sensor generates data and relays information back to the team for better analysis, which can then be used to improve vehicle performance. The mounting system was printed with MakerBot’s nylon carbon fibre.

Prodrive points out that the entire process to get the suspension mount just right took only 90 minutes, from having the 3D printed mount on the ground sheet in the middle of the desert, to observing it, to making updates and reinforcements to the design in the truck, to launching production on Method X. With the new part in their hands, the technicians were ready to put it on the car and continue collecting data. 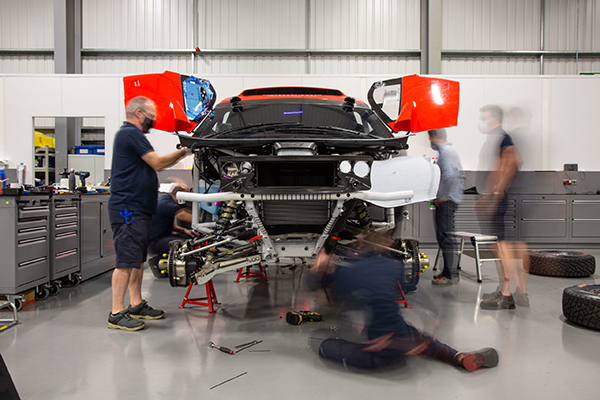 “That was new for us,” states Doe. “In the past, we’ve used additive manufacturing, but we didn’t have the capability to do it so spontaneously. In addition, the materials we used on Method X, particularly the nylon carbon fibre, exhibited higher performance than what we had experienced in past years. There are quite a few parts in the car, such as the engine bays and wheel side near the brakes, where the environments reach up to 120°C and where traditional FDM materials start to struggle, forcing us to revert to aluminium which is costly. In this case, we were able to print parts in nylon carbon fibre, which is able to reach very high temperatures. The carbon print heads on Method X really opened up a lot of new applications for us.”

Doe adds: “With the density of the materials being so low in comparison with traditional aluminium or steel fabrications, we were able to make parts that were much lighter than what a typical part would have been. And it allowed us unlimited freedom to effectively test our parts.”

With an extremely hot turbo engine, 500 litre fuel tank and other highly flammable materials, fire suppression is critical. Typically, the team would have needed to create that nozzle out of traditional heavy metal, like steel or aluminium, which can be time-intensive and costly.

Nylon carbon fibre is a lightweight alternative to metal due to its high strength, heat resistance and stiffness properties.

“We wanted to move away from the typical folded aluminium bracket as much as we could, and instead have a more premium feel in the cockpit,” says Doe. “Method X allowed us to experiment with a new type of nozzle. The sculpted mount was a nice balance of form and function. In fact, it looked 10 times better than what we had in the past, and with no egregious costs.”

With Method X at its disposal, the Prodrive team has begun to explore new and different applications, from car parts to manufacturing aids and tooling. While the company still has physical parts stored and managed on-site, its digital inventory is also growing.

“With the Method X 3D printers nearby and a digital inventory of parts and tools, we’re able to print on-demand and work with more agility and efficiency,” concludes Doe. “We have very ambitious plans to increase the number of vehicles on our roadmap in the coming years. As we continue to scale up, we may need more than a couple of machines in our collection. The cost is relatively low in comparison with other kinds of manufacturing processes, but the investment will pay off in the long-run. We have loads of projects coming, so there will be more opportunities to test the Method machines.”