Made in the Midlands has launched the Manufacturing Advisory Service (MAS) as a dedicated online helpdesk and signposting service to support Britain’s manufacturing industry. The launch event was attended by over 150 Midlands manufactures. MAS was initially a Government initiative that was introduced as part of the Business Growth Service (BGS). However, in 2015 the service was ended as a result of funding cuts — much to the dismay of businesses and entrepreneurs. With the launch of the MAS helpdesk, Made in the Midlands hopes to create something that lasts and evolves. “This is the business community showing leadership,” says Jason Pitt, chief executive of Made in the Midlands. “At times of political uncertainty, as we have seen in recent years, this is vital. The UK’s industrial strategy needs to be strengthened, and businesses need to
lead the way and help the sector grow.” 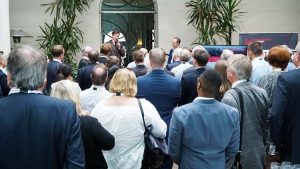