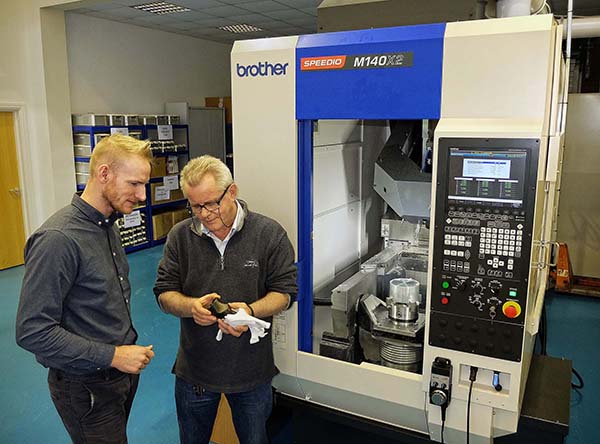 A Japanese-built Brother Speedio M140X2 five-axis mill-turn centre with 22-position magazine for 30-taper tools has been supplied by UK agent Whitehouse Machine Tools to Jointmedica, a Worcestershire company that carries out research and development into the design and manufacture of artificial knees and hips. 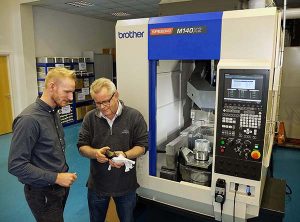 For the creation of prosthesis designs for hip and knee replacements, a new manufacturing cell is being established at the company’s centre for manufacturing research in Hallow. The facility opened two years ago under the present management, although Jointmedica was established back in 2008.
Managing director Terry Smith says: “The essence of successful implant performance is supreme quality, not only of the materials used, but also of the design, manufacture and insertion of the prosthetic during orthopaedic surgery. A case in point is one of our projects, the Polymotion Hip Resurfacing concept. It comprises a highly polished femoral head – currently produced by a partner company using a special low-nickel cobalt-chrome alloy attached to the top of the femur – which locates into a plastic acetabular cup inserted into the pelvis.”
Technical director Roger Ashton adds: “Metal-on-metal hip resurfacing and hip replacement technology has all but disappeared globally due to a number of products on the market performing below expectations, and in certain cases causing significant problems in patients. Some designs with which I have been involved continue to perform extremely well, going on to deliver class-leading results in thousands of satisfied patients. This previous product familiarity provides the basis for our ongoing development of hip resurfacings.”
He goes on to explain that currently the remaining hip resurfacing solutions are metal-on-metal, with a number of companies exploring the use of ceramic-on-ceramic articulations in an attempt to retain the advantages of the procedure. Jointmedica is privileged to be working with Derek McMinn and Ronan Treacy, both pioneers of hip resurfacing implant design and global authorities on metal-on-metal hip resurfacing gleaned from over 20 years’ experience with their previous hip resurfacing enterprise, the Birmingham Hip Resurfacing of Smith & Nephew Orthopaedics.
Together with these specialists, Jointmedica is conducting research into the optimal medical grade polymer to replace the cobalt-chrome previously used for the cup. The company believes this approach to hip resurfacing offers significant advantages to surgeons and, more importantly, the patients who may receive these implants at a relatively young age. 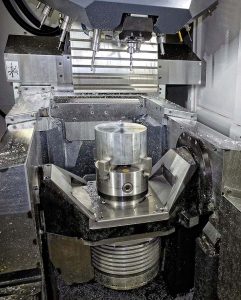 Jointmedica identified a type of highly cross-linked polyethylene with a porous coating as offering the ideal characteristics for use in hip resurfacing. Prototypes are undergoing exhaustive tests in the new R&D cell. At its core is the Brother mill-turn centre, equipped with Blum in-process gauging and tool probing, on which simple turned forms and complex freeform implant shapes can be readily attained.
Development products can be secured easily in an expanding collet on the torque table of the Brother M140X2. Turning and milling operations are then combined to achieve the appropriate geometry, surface texture and finish. Every completed implant is inspected on an Aberlink Axiom Too shop-floor CMM to affirm geometrical characteristics and ensure dimensional accuracy.
Function and wear simulators are used alongside the in-house development work to prove the safety and efficacy of the resulting implants. In the case of hip resurfacing and hip replacement designs, these simulators load and articulate the bearing through millions of cycles in a manner that mimics human movement.
To support the venture financially, in October 2017 Jointmedica was awarded a Proof of Concept grant from Worcestershire County Council as part of the European Regional Development Fund. Five months later, the company received further significant funding assistance from Innovate UK, which has a remit to find and drive science and technology that will expand the UK economy.
“When we reviewed the options for the machining element of our manufacturing cell, which involves the complex milling of textured surfaces and single-point turning of bearing surfaces, we originally thought we would need a five-axis machining centre and a CNC lathe,” says Ashton. “The availability of the Brother M140X2 mill, with accurate turning capability using a direct-drive 2,000 rpm torque table, offered us the chance to use just one machine to complete all cutting operations.”
It was felt that a 30-taper tool interface would suffice for machining all materials to be used in the orthopaedic devices, and such machines have the additional advantage of a small footprint. The preference was for a true five-axis machine rather than a three-axis model with a compound CNC table, as the former would ensure the necessary functionality within a compact envelope.
Three options on the market were considered. The Brother machine was selected due to its superior turning capacity as well as its fast axis movements. This motion is carried out in four of the five CNC axes simultaneously during non-cutting times together with the 0.9 second tool change, so idle times are minimal. Cutting feed rate is high at up to 30 m/min, maximising stock removal for high productivity.
Manufacturing engineer Oliver Clayton says: “The capabilities of this milling machine are beyond impressive. During my induction training, I was able to produce sample parts in record time. The cutting performance and level of detail I can achieve with this variant of the Brother line-up exceeds our expectations. 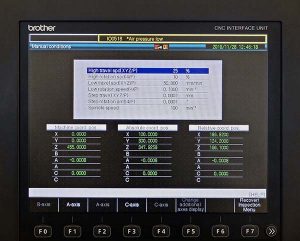 “Importantly, the package supplied by Whitehouse was comprehensive,” he adds. “It consisted of not only the Brother machine and one week of operator instruction at their Kenilworth technical centre, but also professional telephone support and recommendations as to suitable CADCAM software. We chose Alphacam, whose engineers have also been helpful. They defined the process, supplied the post processor for the Brother mill-turn centre and provided training.”
Other facets of the installation, he singles out for praise, are the machine’s speed and accuracy, and its user-friendliness, especially regarding the usability of the Brother high-speed C-00 control system. He describes the control as being convenient for editing the off-line programmed feeds and speeds, and as having a huge memory able to hold multiple program files.
“Once we have proved the Polyethylene Hip Resurfacing design and production process, and obtained class 3 CE marking, we will be marketing a holistic design and manufacturing package to the big multinational prosthetics producers,” concludes Smith.
For further information www.wmtcnc.com