Fabrication and CNC machining subcontractor Inishowen Engineering has increased the size of its production facility in County Donegal. The move follows an €11m investment in a new 160,000 sq ft factory that opened on a 7-acre site in Drumfries, in early 2019. As part of the expansion programme, which started in April 2017, an extra €19m has been spent on machine tools. 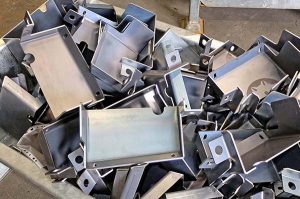 As well as a number of Bystronic laser cutters, also on site from the same source are seven press brakes, including two Bystronic Xpert 6 m, 650 tonne capacity machines that arrived in 2019.
The increasing size of components going through the factory necessitated a press braking cell to bend up to 12 m lengths, hence the installation of two Bystronic Xperts. These machines are positioned side by side so that they can be used individually or in tandem, mirroring the earlier purchase of a pair of 400 tonne, 4 m press brakes.
Half of all profiled sheet that is folded in the factory is less than 1 m in length. This factor proved to be the reason for the purchase in 2015 of an Xpert 40 (1 m, 40 tonne capacity) press brake that owner and managing director Michael McKinney says is at least one-third faster at bending smaller components than larger machines.
The extra speed translates into higher productivity and, in addition, the machine does not draw as much power, just 7.5 kW instead of typically 30 kW for a large press brake, so electricity bills are lower. Inishowen’s acquisition was so successful in raising the profitability of smaller component production that, two years later, the folding department added the next larger model in the Xpert range with 1.5 m/80 tonne capacity.
For further information www.bystronic.co.uk