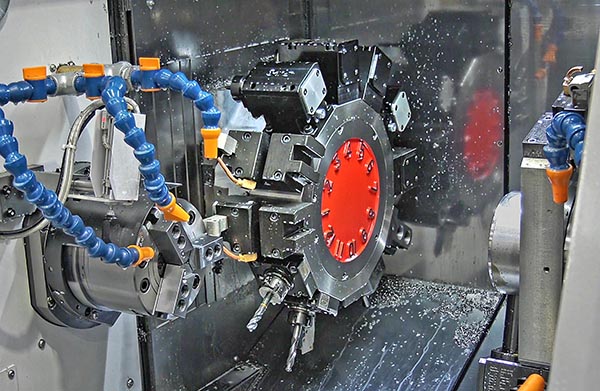 Coventry-based Adams Lubetech is a manufacturer of single-point and centralised lubrication equipment for OEMs in the food, compressor and conveyor sectors, and across industry in general. Consistently rising sales worldwide meant the company needed extra production capacity. So in early 2020 Adams Lubetech purchased its first lathe from Citizen Machinery, a fixed-head Miyano BNJ-51 turn-mill centre, to produce not only rotational parts, but components produced previously on a manual mill or a power press.

Eric Chambers, factory manager, says: “With these parts in mind, we wanted a powerful, rigid turning centre that was equally capable of milling. We selected the Miyano bar automatic primarily due to its competitive price. The first purely prismatic component we produced on it was an anchor block for our sister company in Belgium. We were milling and drilling the steel blocks manually in several operations, which was time-consuming, so we decided to use the Miyano as a chucking lathe to produce them automatically.”

The lathe effectively doubles as a CNC machining centre in this application. Each part, which has large threaded holes and smaller diameter holes machined into multiple faces, comes off the machine complete in a cycle time of 139 seconds.

The Miyano is also taking work from a power press at the Coventry factory, resulting in even greater advantages. A deep-drawn part previously required seven sequential operations, removal for skimming on a capstan lathe and return to the press for slotting. Lead-time was more than one month to produce a typical batch of 8000 and there was a lot of manual intervention for inter-machine handling. The same part is now produced in one hit from bar on the twin-spindle Miyano in 2.5 minutes, so the entire batch can be finished and shipped in a fortnight if the job is left to run around the clock, seven days a week.