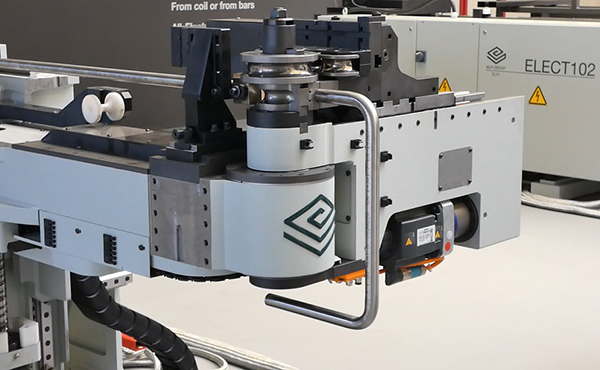 In the furniture and similar sectors, where the tubes to be bent are often very long and curved into sometimes particularly complex shapes, the bending head must take up as little space as possible to leave room for the shape that the bent tube will assume.

On tube bending machines with right and left-handed bending directions, this need is much less urgent because the possibility of using one or the other bending direction solves many problems of interference between the tube and the machine parts. However, this is not the case on tube bending machines with only one direction of bending. The only way to avoid the risk of interference in the latter case is to reduce the overall dimensions of the bending heads as much as possible.

Precisely to meet this requirement, BLM Group has developed a new compact bending head for its ELECT40 machine that is capable of executing shapes that were previously not possible with only one bending direction. It is clear that for some parts, using a right or left-handed in-process tube bending machine is the only way to produce the components in a single cycle.

The ELECT40 elongated bending head is 35% lower and 31% longer than the standard head.

Furthermore, the design of the head’s dedicated kinematic mechanisms has enabled an increase in the speed of both the bending arm (+20%) and of the clamp and pressure die (+25%). As a result, a reduction in cycle time of about 10% is possible on a typical part with four bends.