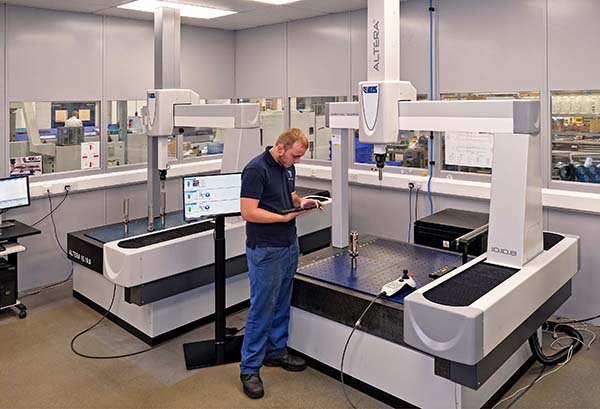 Two CMMs manufactured by LK Metrology have largely superseded the use of a pair of smaller capacity, 15-year-old machines in the inspection room at contract machining specialist WLR Precision Engineering of Wilford, Nottinghamshire. To enable production operators, as well as quality inspectors, to operate the new CMMs and access the measurement reports easily, the machines feature LK Launchpad, an icon-driven, touchscreen operator menu, and a network of viewing screens and tablets. The simplified operator menu lists all the available inspection programs and the exact component placement position on the machine table for inspection, giving operators the confidence to perform measurement tasks in just a few clicks. It is possible to share measured results and automatically generated reports between screens, tablets and other networked devices for easy access and viewing from any location.

WLR is widely regarded by its customers as an all-encompassing service provider, as in fulfilling virtually every contract it manages the entire production process. A proportion of the value of each part is rigorous metrology, often involving 100% inspection. Contracts come mainly from the oil and gas, pharmaceutical, medical, laboratory and scientific instrumentation industries, which place great reliance on the accuracy and consistency of parts delivered.

Sales manager Tom Parr says: “The increasing confidence that customers have in the accuracy and consistency of components they receive has resulted in us winning considerably more business in virtually every sector that we serve.” 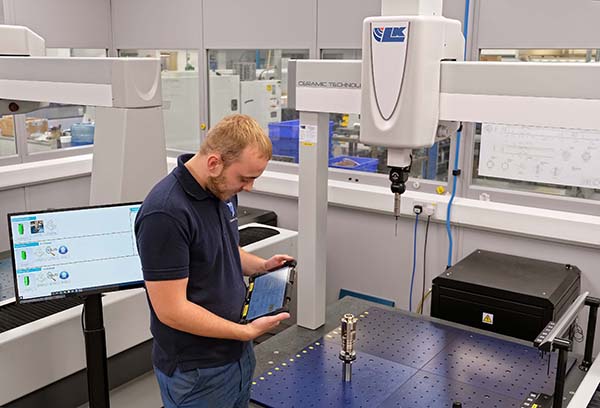 What has helped above all in raising that level of confidence was the purchase in 2015 of the first LK CMM, an AlteraS 15.10.8 with a measuring volume of 1524 x 1016 x 813 mm. The machine quickly transformed quality control activities at the Wilford factory, making it faster, much more efficient and less labour-intensive in respect of both measuring parts and preparing inspection reports.

A major benefit of the CMM is its large table area, approximately 1.0 x 1.5 m, which is able to accept up to 12 identical components at a time for batch inspection, instead of just one as on either of the older CMMs. It is unusual within the manufacturing industry to see a measuring machine nested with multiple components in this way, but the subcontractor attests that it is a perfectly feasible way of operation. Typically, it is possible to inspect five batches during a day shift with a load time of about five minutes between each.

Once components are in place, an inspector presses a button to commence the measurement of every part in a single, automatic cycle, the longest of which is two hours. The operator is thus free to work elsewhere on other metrology equipment for a majority of the day. Efficiency is much increased compared with the former method, whereby an inspector was committed to sitting by a CMM all day loading each part individually prior to every automatic measurement cycle, all of which took an indeterminate amount of time that was longer than the equivalent automatic batch cycle.

With the previous metrology route, subsequently preparing reports by hand on 12 inspected parts would typically take three hours, which was not just time consuming, but tedious. Now, big savings are again evident due to the ability of CAMIO (CMM multi-sensor metrology software) to perform the task fully automatically. A comprehensive, graphically supported inspection report is available for an entire batch in a matter of minutes, covering perhaps 30 or 40 critical dimensions on each part, complete with colour-coded content in the event of any non-conformance. The software exports the data, via a CSV-type file especially formatted by WLR, directly into an Excel spreadsheet. 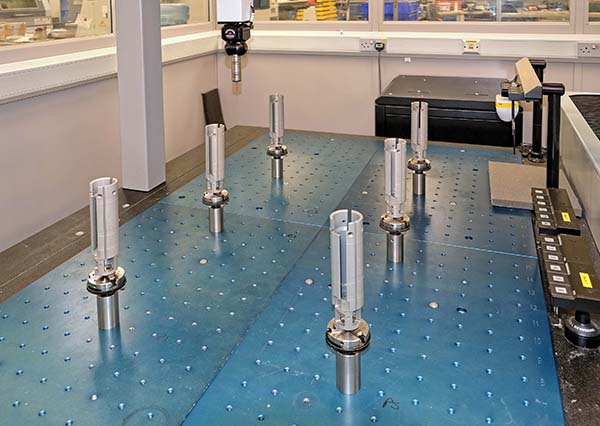 All these advantages have led to a considerable enhancement in inspection and reporting efficiency, allowing the subcontractor to accommodate a surge in orders.

By May 2021, the company required a further increase in batch measuring capacity. This time, WLR purchased a smaller LK AlteraS 10.10.8 with a working volume of 1016 x 1016 x 813 mm, together with the latest CAMIO 2021 and additional LK Launchpad software. The easy-to-use, graphical interface enables not only the two WLR quality inspectors and quality manager Tony Blood to load parts singly or in batches of up to six at a time, but also the 10 dayshift and five nightshift machine operators.

Launchpad makes it simple to load the correct program for inspecting a component, with details called up via simple graphical menus and icons on a screen positioned by the machine. The operator can locate the component by selecting the customer by name, or via the part category, or by directly calling up the part itself complete with details of the machining process. Set-up on the CMM is straightforward, assisted by 12 mm thick aluminium fixture plates pre-drilled with a grid of holes at a 50 mm pitch fitted across the granite table of the machine. The operator simply places the component in a numbered location on one of the fixture plates, as indicated by the Launchpad graphic, and instigates the measuring program by pressing a button on the touchscreen. Despite being a powerful process, WLR confirms that the software is remarkably flexible and easy to use.

For convenience, the same inspection results that appear on the screen adjacent to the machine are also available on networked tablets used by machinists on the shop floor.

Another plus point, introduced at the time the first LK CMM arrived, is the ability to program the machines directly from CAD. Before the new LK CMMs arrived, it was sometimes necessary to produce a first-off component for a customer in up to six operations on a succession of machine tools, then take the part repeatedly to the inspection department for measurement and subsequent correction if necessary. After it had been finished-machined, the component provided the basis for teaching a measuring program into one of the older CMMs. Now, in the same way that a CADCAM system derives a metal-cutting program directly from an electronic model of a customer’s component, the DMIS inspection cycle for the LK CMM can be created from the same CAD model using LK CAMIO software in advance of first part production. 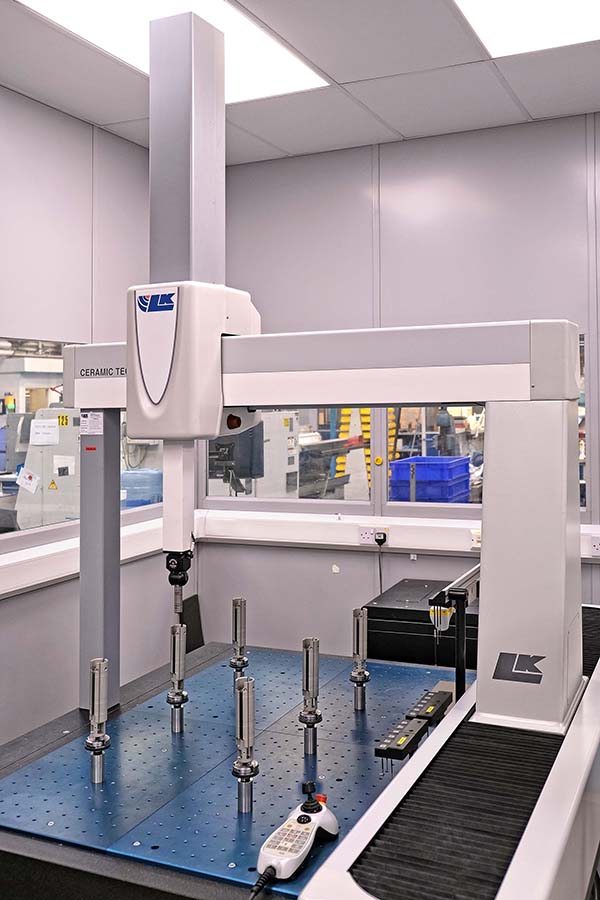 All inspection routines for both LK CMMs are now prepared this way in CAMIO, which performs not just programming but analysis of the captured data and automatic reporting of the results. The measurement program enables the first-off part to be checked immediately on its first visit to the AlteraS 15.10.8. Programming time is quicker than before, but the biggest plus point is that it is completed offline, so the CMM is unoccupied, allowing inspection of components to continue uninterrupted. Together with the benefit of multi-sensor capability, permitting the use of a Renishaw SP25 scanning probe or a Nikon LC15Dx laser scanning head instead of a touch-trigger probe, measuring throughput has increased.

On the implementation of the successful metrology upgrade at WLR, Blood says: “Our new measuring processes can be used by personnel with a wide range of experience levels. The high degree of automation plus the ability to increase speed by scanning as well as touch-probing have helped us save time and remove inspection bottlenecks. Automation and deskilling of operations have also allowed us to enhance inspection efficiency without adding to our headcount. Added to this, every day there is a further economic advantage through the ability to run the CMMs unattended for up to two hours at the end of each day shift due to our strategy of batch loading.”

Parr adds: “The parts we produce typically range in size from about 5 mm square up to 115 mm in diameter by 250 mm long. At one end of the scale they are milled, turned, ground, spark-eroded and diamond-lapped from free cutting brass, aluminium and stainless steel, but very often they are machined from the toughest of alloys, including Inconel 718, Invar or Hastelloy.

“Consistently high precision is the watchword here, with machined tolerances normally of the order of ±25 µm, but exceptionally down to ±3 µm, if necessary,” he continues. “Nearly all components are inspected on our LK CMMs. There is enough spare capacity now to provide our customers with additional services if required.”