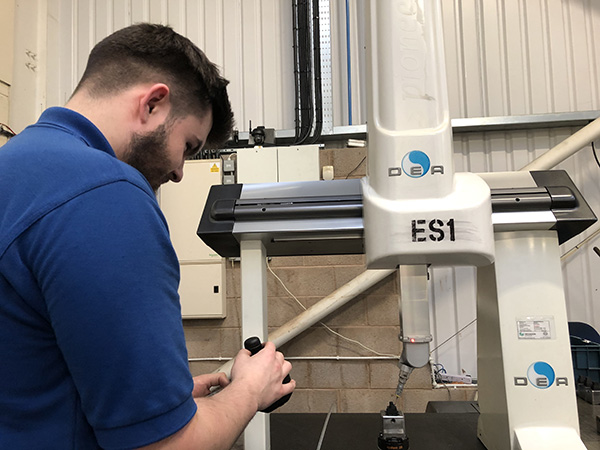 Mould maker Kavia Tooling is using a Hexagon co-ordinate measuring machine (CMM) to create an offline zero transfer system ahead of the manufacturing process for parts and electrodes. This strategy considerably reduces downtime on its CNC and EDM machines when setting up new jobs. 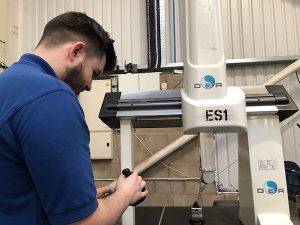 Production director Mark Cole says some components are particularly time-consuming to set up traditionally, and even simple parts mean the machines are idle during set up. However, Kavia’s unusual use of the Hexagon CMM means that machines are cutting one job while the set up for the next one is being carried out.
“Hexagon customised their PC-DMIS software, which comes as standard on their measurement devices, to enable us to use it to find offsets at the beginning of the operation,” says Cole. “Instead of having to put each part on the machine and then set it, we set it on the CMM, which gives us the X, Y, Z and U orientation. We only have to put the zero transfer plate, which is micron-accurate, into position on the machine, and it knows the exact location of the part.”
This approach can be done with any number of components, thanks to another piece of customised software that Kavia Tooling devised itself, and which engineers from its CAM system, Edgecam, developed for the company. Edgecam drives seven high-speed CNC milling machines with spindle speeds varying from 12,000 to 30,000 rpm, and a Sodick EDM machine.
“But it’s no ordinary machining process thanks to the customised software which we call Merge,” explains Cole. “It collates data from all programs for the job and merges them into a single file, many at 36 MB and containing around 1.5 million lines of code. Merge also includes the Edgecam NC code, datums to set the parts on, zero transfer, and cutter tool heights.”
He cites an example when the company was working on two cavity plates on one side of the machine, and four inserts on the other: “We put the individual Edgecam CNC programs for each component together into one file, and it all went to the machine as one large program.” 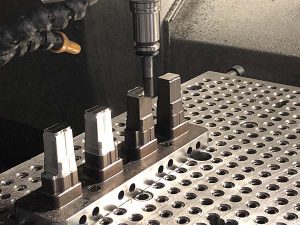 Merge also keeps cutting tools to a minimum, by looking at information such as duplication, length and quality of the tools in all programs.
“If there are two repeating cutting tools in the individually merged program, it selects the best one for the manufacturing process,” says Cole. “It goes through every single NC program and rearranges all the tools accordingly.”
The end result of using Merge with the zero transfer fixture plates created on the CMM is a CNC program which can machine several parts at a time without the need to use the machine as a set-up station, as all preparatory operations are carried out offline.
Says Cole: “If we were setting up a component to be square, directly on the CNC machine tool without the CMM, we’d have to ensure it was perfectly in line with the machine’s axis. Doing that for 10 components considerably increases the risk of error, especially where there are overhangs. In contrast, setting them on the CMM means everything is automatically correct, because it tells the machine the angle of each part.
“To set up six fairly difficult components directly on the machine may take one day, during which time it’s not running,” he adds. “However, it’ll only take about an hour on the CMM, and we can be confident that they’ll all be absolutely accurate.”
Cole says that while the Merge software combines with the CMM zero transfer system to get the best out of the company’s CNC mills, even greater benefits are gained from using it on the Sodick EDM machine. 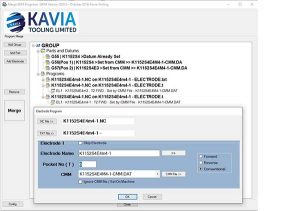 “This machine used to be our biggest bottleneck,” reveals Cole. “We had to set the electrodes and the part on the machine, and program it by typing-in figures manually, which led to errors. It was an absolute nightmare. However, when we developed the Merge software it went from being the largest bottleneck to the fastest machine in the factory. And it’s all mistake-proof; there’s no typing as everything’s done from the CAD dimensionally. Moreover, all the offsets are set on the CMM so there’s no setting on the machine.”
Merge collates all the programs, zero transfers and information about the spark positioning. The software works with up to 12 electrodes at a time; brings all the CNC programs together; identifies the X, Y, Z and U orientation; puts everything in a format that runs on the Sodick EDM to the correct datum; automatically adjusts the tank height; and provides a setting sheet.
In fact, Merge is proving to be so beneficial for both simplifying and accelerating the work on the Sodick EDM that Kavia is now developing the software commercially for those machines.
“It’s currently being trialled in the field, and we’re aiming to start marketing it shortly,” confirms Cole.
For further information www.edgecam.com