Secretary of State for International Trade, Dr Liam Fox, recently opened the new factory, offices and demonstration suite at Swift-Cut Automation, a British designer and manufacturer of CNC plasma-cutting tables. During his visit, he spent some time discussing Swift-Cut’s growing success in the international export market. In just six years since Swift-Cut’s inception in 2011, the company now exports over 80% of its products globally. 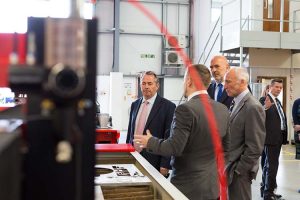 Working closely with the Department of Trade, Swift-Cut has opened channel partners in 26 countries and, with the continued support of the government, is now successfully expanding into the USA. “Swift-Cut is exactly the sort of company we need to be replicating across the UK,” said Fox. “Success stories like this are flying the flag for British quality and expertise, bringing a boost to their local economies.”
For further information www.swift-cut.co.uk

The largest-ever research project backed by Innovate UK for developing cost-effective titanium-alloy structural airframe parts is nearing completion. The three-year TiFab programme has studied more than 170 aircraft components to assess their suitability for an advanced-joining process which could offer annual raw material savings of around £9m. TiFab consortium members CAV Advanced Technologies, Kuka, Ten Solutions and The Welding Institute predict that manufacturers could save over 200 tonnes of titanium a year if they chose linear friction welding to bond parts instead of machining from solid billets.
For further information www.nearnetshape.co.uk

The MTA has announced that Lloyds Bank Commercial Banking is to be, once again, the headline sponsor of the largest event of its kind in the UK – MACH 2018. This is the fourth time Lloyds Bank has sponsored MACH, further strengthening a long-term relationship between the bank and the MTA, the organiser of the event. MACH takes place every two years and in 2016 attracted over 25,000 visitors. As part of its ‘Helping Britain Prosper’ plan, Lloyds Bank is support British manufacturing with an additional £1bn of new lending this year. MACH 2018 will be held on 9-13 April at the NEC Birmingham.
For further information www.machexhibition.com

Mills CNC, the sole distributor of Doosan machine tools in the UK and Ireland, has appointed Heath Redman as its new operations manager. Redman has over 30 years’ manufacturing and machine tool management experience gained in the UK and overseas. The operations manager position is seen as critical in directing and focusing the company’s aftersales service resources to achieve a seamless transition between the services provided, as well as ensuring that they deliver (individually and collectively) business benefits to customers.
Redman has previously run his own manufacturing and machine tool companies
in South Africa.
For further information www.millscnc.co.uk