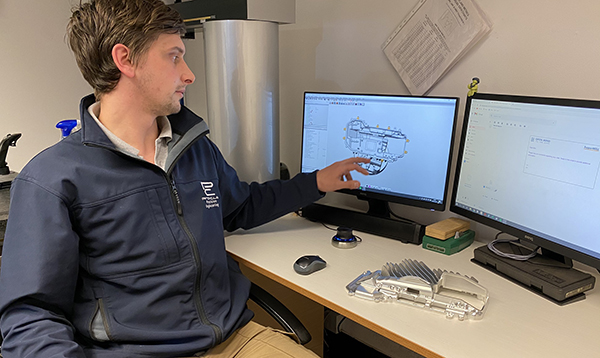 When Pro-Cut Precision Engineering opened its doors for business just over 10 years ago, the objective was to invest in the very latest equipment to ensure the Milton Keynes business could machine high-quality components in short lead times. As a company that has acquired a multitude of three and five-axis Hurco machine tools for machining complex parts, component programming was becoming a time-consuming process – that was until Pro-Cut invested in the hyperMILL CAM system from Open Mind Technologies.

The subcontract business works across several areas, serving sectors such as motorsport, defence and industrial machinery. Explaining the reasoning behind investing in hyperMILL, Pro-Cut Precision Engineering programmer, Alex Parris-Hammons, says: “We previously had a CAM system, as well as programming many components at the machines, but we were losing time by not being able to stay ahead of the game. hyperMILL allows us to program offline and do all the programming while the machine is cutting a current job. This enables us to build a queue of future jobs.

“We were doing five-axis work with our previous CAM system, but found the collision detection wasn’t great,” continues Parris-Hammons. “In fact, we had to lie to the software system to get the parts we needed. With hyperMILL that isn’t the case; it identifies where the collisions are, both in an internal and external simulation. It provides a list of where the collisions are, and it makes it simple to correct any problems. hyperMILL is known for its collision detection and with that, you can trust the billets going on the machine will come out as 100% correct parts.”

Now with two seats of hyperMILL, Parris-Hammons recalls the initial installation of the system: “The plan was to use it initially for simple components and then build-up to the full capability of hyperMILL, which is five-axis simultaneous tool paths. This would give us better surface finishes and faster machining times. In the early stages, I called the Open Mind technical support team and they were able to walk me through any scenarios by using Team Viewer and a telephone call to resolve any issues.”

Steve Holmes, managing director at Pro-Cut Precision Engineering, takes up the story: “We purchased hyperMILL a little while ago actually, and Alex had done the training, but we naturally kept falling back to our existing CAM provider due to tight deadlines and several other factors. For a little while, hyperMILL was just sitting there, but then this one particular part came along. It was a challenging aluminium electronic casing component that was outside the scope of our current CADCAM system. So, we decided that this was the part that we begin with, where we jump in and manufacture with five-axis simultaneous hyperMILL machining.”

As the programmer tasked with creating the program for the complex aluminium electrical housing part, Parris-Hammons highlights the features that stood out: “The five-axis and the Z-level finishing is very good with this software. We just have to click on a surface, and hyperMILL will machine it. Once you understand how it works, it’s very easy to use and get up to speed. It means we can quickly reach competence levels where we can do complex work much easier. 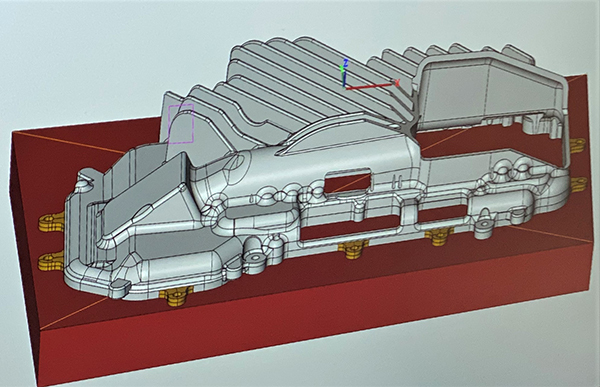 “The tool library is also very good,” he adds. “It allows you to input a lot of information on each tool and the respective holder. When you put that information into the system to do the simulation, it will then calculate whether it is going to collide with your fixtures or the machine. It will detect and protect itself.”

Taking a closer look at the electrical housing part, Parris-Hammons says: “For the first operation we held the part in a Lang vice, machined the top and all of the internal sections, as well as the outside profiles. This first operation alone required upwards of 25 tools and the hyperMILL tool library keeps that information ready, so we can access it for other upcoming jobs. This makes the whole process of programming a lot quicker and easier.”

Discussing potential collisions and tool path and strategies, he says: “With the tool library we can set up a tool length and how far the tool protrudes from the holder; that data is used when hyperMILL is calculating. This avoids collisions and also tells us how much further the tool needs to stick out to avoid a collision.”

Following the first operation, the aluminium housing was turned over for machining on the opposite face. 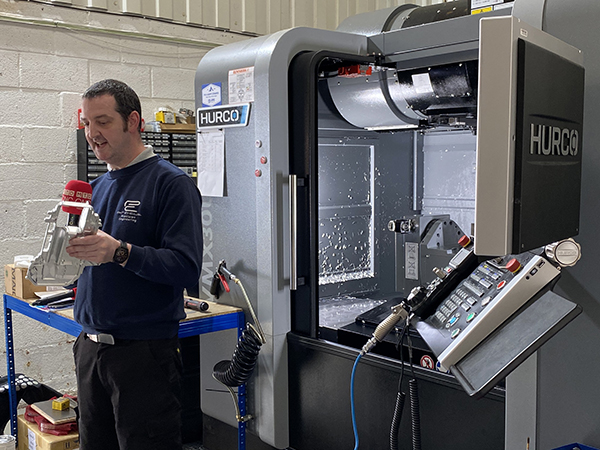 “We made a fixture plate to locate on the inside of the component and threaded the tabs to pull down the periphery of the part,” explains Parris-Hammons. “On the second side of the part, we used six tools. Programming the component took a couple of days. However, now that I have undergone this steep learning curve and know what to do, programming similar future components would take significantly less time – we could probably program this part in half a day now.

“Previously, this part would have been very difficult to program without hyperMILL. The second side of the component would have undoubtedly made our previous CAM system crash as there is a lot of information and a lot of code being produced. With hyperMILL, we have machined the complete component in just 15 hours. Now that we have used this very complex part as the first push to get into hyperMILL, we’re very pleased to be using it for all of our parts.”

Concluding on why the company opted for hyperMILL, Holmes says: “Our previous system had its merits, but it didn’t have the process security, collision detection and avoidance, and it would have been incapable of the complex five-axis work that hyperMILL can breeze through. On the shop floor, it’s still early in our learning curve to qualify all the benefits, but we can already see that it’s improving surface finishes. Additionally, when we are rough machining, there is no ‘fresh air cutting’ with hyperMILL – our previous system didn’t have this level of intelligence. hyperMILL really is the next level.”