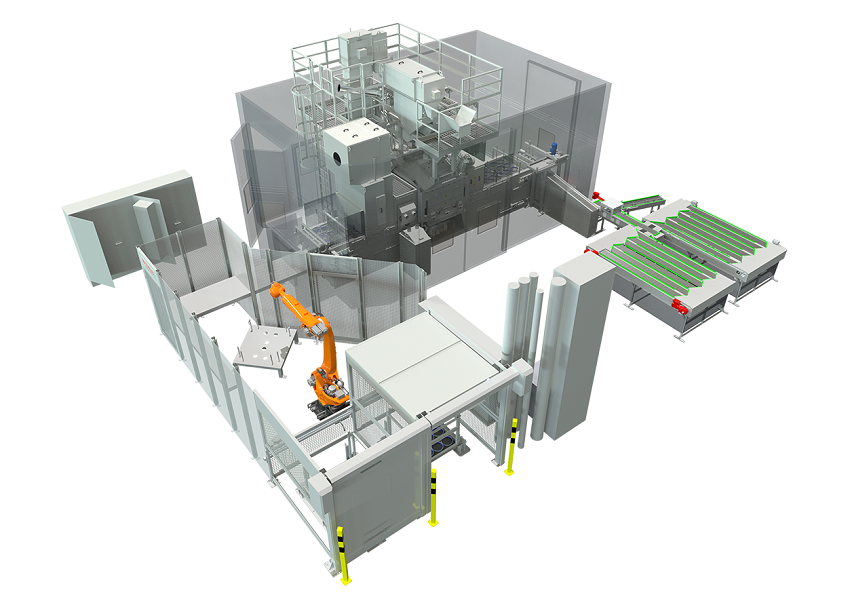 For the expansion of its transmission production facility for electric vehicles (EVs), a German automotive supplier has purchased a new continuous-feed blast machine from Rösler that includes fully automatic workpiece handling. The customer chose the Rösler equipment, because it offered high productivity, is easy to maintain and has a long service life.

The workpieces in question consist of various toothed EV transmission components that are deburred using the Rösler continuous feed-wire mesh belt-blast machine. At the start of the deburring operation the workpieces are placed manually on two storage units, which are part of the component transport system. After an integrated camera system has confirmed the correct transport position, the parts are positioned precisely on the wire mesh belt in lots of three and continuously transported through the shot-blast machine. Upon completion of the shot-blast process, a powerful blow-off system completely removes any residual blast media from the workpieces.

In the next step, the now deburred components are transferred to a buffering station consisting of a conveyor belt. Here, the workpieces are precisely repositioned so that a robot can pick up four parts at a time and place them in layers into suitably staged workpiece bins. Whenever a layer is complete, the robot picks up an intermediate cardboard sheet and places it in the bin. Completely filled or, in case of a workpiece change, partially filled bins are automatically removed from the robot working area. This allows the operator to safely remove them from the manufacturing cell with a lift cart.

The shot-blasting machine was designed for three-shift operation allowing cycle times of less than eight seconds per workpiece.
For further information www.rosler.com