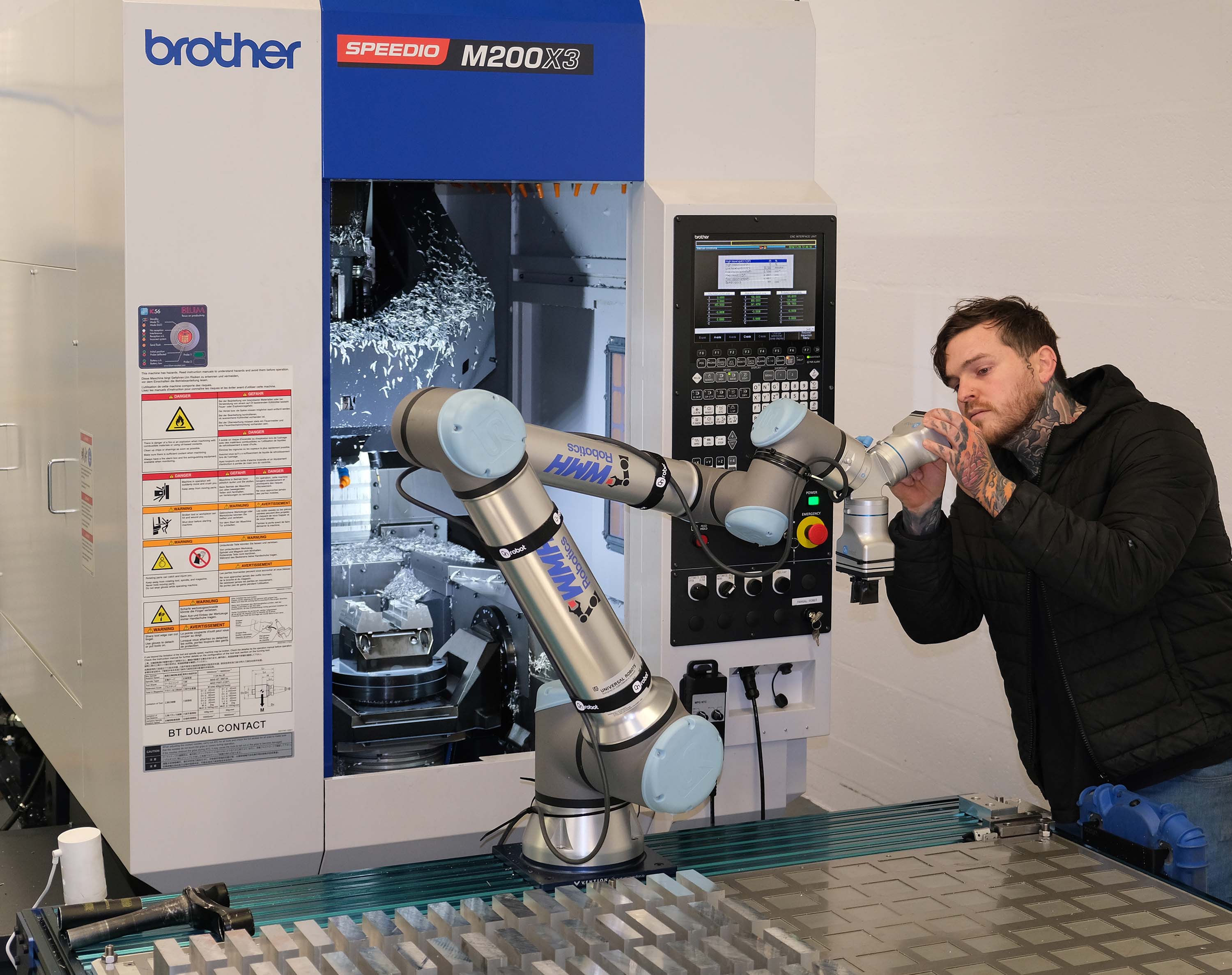 Set up as recently as 2016 by ex-professional cyclist Andrew Cooper, Unite has already established itself as an up-and-coming manufacturer of aftermarket cycle products. Having started out with two second-hand, three-axis machining centres in a factory unit in Newtown, Powys, the company recently doubled the number of machines on the shop floor with the purchase of two new production centres. The machine are a Brother five-axis machining centre and a Biglia CNC bar-fed lathe, both supplied by Whitehouse Machine Tools.

Funds for repayments on the machines are being generated not only by the sale of cycle parts, but also by providing a subcontract machining service, a side of the business that has recently risen from 5 to 60% of throughput.

The first machine from Whitehouse, a Japanese-built Brother M200X3 five-axis machining centre, arrived in November 2021 to enable the manufacture in one hit of complex prismatic parts for cycles, such as pedals and stems. It is possible to produce them on the three-axis machines, but expensive fixtures would be needed and, in any case, the quality would be inferior, which is the last thing Unite wants while expanding its range of premium products.

Brother machines have a 30-taper spindle rather than a 40-taper tool interface, but that was of no concern to Cooper as he mainly cuts aluminium. Factors important to him when buying a new machine tool are productivity and purchase price. A couple of 40-taper machining centres were also considered, but he opted for the Whitehouse offering despite it being the first time he had dealt with this supplier.

During machine installation, Whitehouse integrated a Universal Robot cobot (collaborative robot) that had previously been purchased through WMH Robotics together with a workpiece stocker table. The equipment enables components requiring two operations, such as pedals, to emerge from the production cell completely machined after having been inverted following op 1 and placed back in the fixture. Initially, blanks are picked up individually from one side of the table in front of the machine and finish-machined parts are returned to the other side.

The cell operates largely autonomously for about 20 hours per day, producing parts in batches of from 10 to 1000-off to a general tolerance of 0.05 mm, although some features are tighter. Rapid set-up times in the Brother cell of around 5 to 10 minutes, without the need for tool exchange (as all of the cutters needed are resident in the magazine), make machining smaller volumes economical. This is fortuitous, as the current high price of material means that producing smaller volumes is highly desirable in order to reduce the cost of work-in-progress.

Brother’s M200X3 has a 200 rpm C-axis torque table that facilitates not only milling and drilling, but also rotational machining of components with a turning tool in the spindle. While some users find this mill-turn capability in one clamping invaluable, Cooper does not plan to exploit it for machining his products, as few of them would benefit. Some subcontract components might well be machined more economically using such cycles, however.

Instead, turned cycle components up to 70 mm diameter requiring some milling content are being produced in one hit from bar in a new Biglia 620YS turning centre equipped with a sub-spindle for synchronous part pick-up and reverse-end machining. The lathe also benefits from a turret with a Y axis and 15 live stations powered by a 13 kW motor. Y-axis CNC movement is essential, as a number of cycle components, such as headsets, require a slotting operation that would be impossible to perform in-cycle using just the X and Z travels, so would necessitate a second operation on a mill.

The lathe arrived in Newtown in February 2022, prior to which production of about 20 rotational parts was subcontracted out locally and pedal axles were bought in from overseas. A couple of other potential lathe suppliers were considered before the decision was made to purchase the Biglia. However, the specification of the Italian lathe, with its 30 kW/15 kW main/counter spindles and box ways in X and Z (with a linear guideway in Z for speed) clinched the deal.

The production of around 30 new aftermarket cycle products that are predominantly turned is planned for the lathe, which will soon be working a five-hour ghost shift at the end of each day thanks to automatic feeding of bar stock from a Hydrafeed Multifeed 80 short bar magazine.

“The purchase of highly capable, multi-axis production centres such as the Brother and Biglia are the way forward for us and will underpin what I hope will be rapid growth,” says Cooper. “I predict we will treble our staff from three to nine people by the end of our next financial year in March 2023.

“As to my decision to opt for these machines from Whitehouse, it was partly down to the high-quality build and suitability for the intended applications,” he continues. “However, the support provided by the supplier was also a contributing factor. It included recommending a finance company, early help with establishing some machining processes and writing programs, and the ongoing offer of unlimited training.”

Cooper adds that other new equipment arrivals in the next few months will be a plastic 3D printer for producing components such as chain guides, and a sand-blast booth together with environmentally friendly ceramic-coating equipment to avoid the colour variability previously experienced when putting cycle parts out for anodising.
For further information www.wmtcnc.com