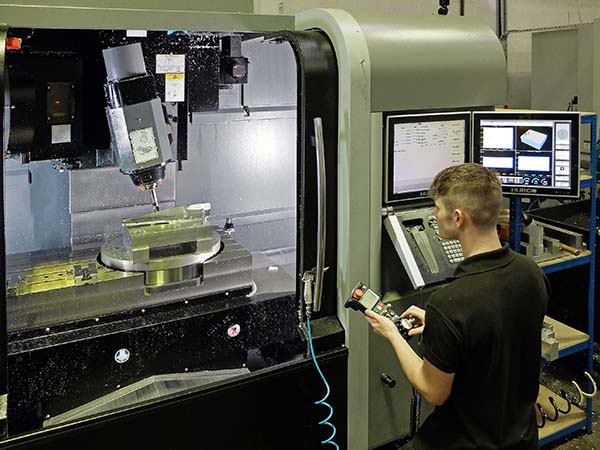 A seventh five-axis machining centre has been installed at Preston-based, tier-two aerospace subcontractor, TGM, primarily to cope with increasing volumes of Airbus A350 work. Two years ago, each month the firm was delivering four port and starboard aircraft wing sets comprising 20 parts each, whereas today 10 sets per month are required and the number will climb further over the next two years. 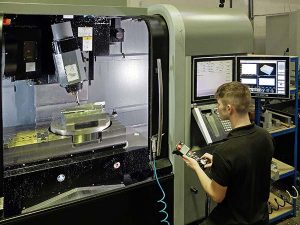 The latest addition to the firm’s five-axis capacity is a Hurco VMX42SRTi, which has conversational programming capability built into its WinMax control system. TGM director Sarah Stephens says: “We already had eight three-axis Hurco machining centres on-site, including one with an add-on rotary axis, so were familiar with the manufacturer’s twin-screen, menu-driven control system and graphical user interface.
“Our operators have always found it to be user friendly for shop-floor programming, and on the latest machine only the fifth B-axis that swivels the spindle head is different, so adaptation was easy,” she adds. “The skill sets were already in place to create five-axis cycles involving the positioning of both rotary axes.
“We purchased extra WinMax software to run on a laptop and use it to program around 90% of jobs run on the Hurcos, including the five-axis machine, with data for the remaining work entered at the controls on the shop floor. Essentially, the Hurco software is an inexpensive way of preparing components for 3+2-axis machining. It is like an extra CAM seat but costs vastly less than the £50,000 purchase price and £5000 annual maintenance of one of our top-end CADCAM packages alone.”
For further information www.hurco.co.uk