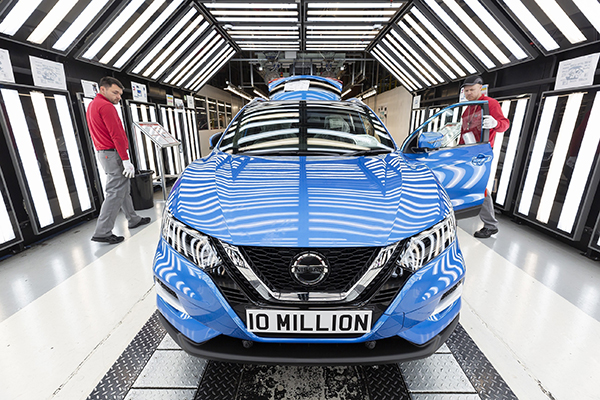 Nissan’s Sunderland plant is celebrating another record-breaking milestone after the 10 millionth vehicle rolled of the production line. 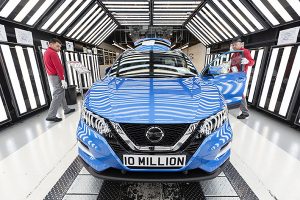 It has taken the plant 33 years to reach the 10 million mark – making it the fastest car factory in the UK to attain the landmark figure. The milestone also means that, on average, a new Nissan has been built in Sunderland every two minutes since production started in 1986. A vivid blue Nissan Qashqai Tekna proved to be the 10 millionth vehicle.
Steve Marsh, vice president – manufacturing at Nissan Sunderland says: “Reaching this huge figure has called on all the ingenuity, commitment and spirit of our highly skilled workforce, many of whom hail from the northeast of England. Together we are determined to continue driving up the high quality standards that our customers have come to expect over the past three decades.”
For further information www.nissan.co.uk

A manufacturer of round, flat and profile wire has recently completed a £250,000 investment drive to help it build on a record year.

Alloy Wire International, which employs 31 people across manufacturing sites in the Black Country and Yorkshire, broke through the £11m barrier in 2018 and immediately pushed the button on the acquisition of 560 mm single block and 200 mm multi-block drawing machines. These arrivals will help increase capacity and ensure AWI continues to deliver its three-week lead times; so crucial for customers in the automotive, aerospace, nuclear, and oil and gas sectors.
For further information www.alloywire.com 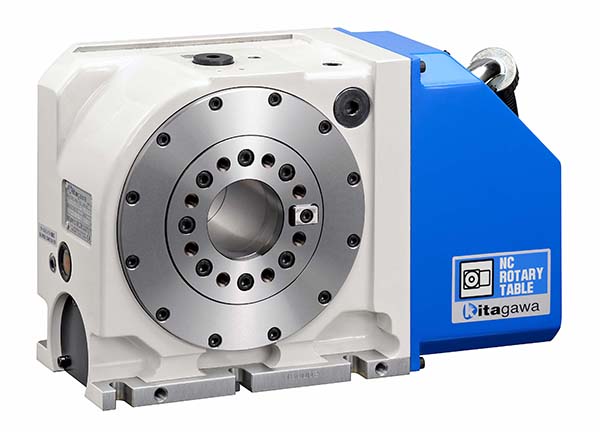 Kitagawa, represented in the UK and Ireland by sole sales agent 1st Machine Tool Accessories, has introduced the first in its MK series of general purpose rotary tables. 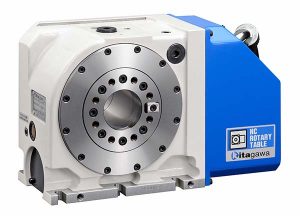 The MK200, which has a 200 mm diameter faceplate, features increased holding torque compared with the MR-series table that is now superseded. Faster, heavier duty, more productive machining of the clamped workpiece is said to result. The unit is also more compact, minimising any loss of table area and working volume in the machining centre.
Although Kitagawa has stronger and more compact rotary tables of similar capacity in its product range, such as the GT200 and CK200, the MK200 is designed to meet 90% of all customer requirements. The newly developed rotary table provides a rigid fourth CNC axis and reflects Kitagawa’s focus on constantly improving the standard of its tables in three main areas: enhanced performance, improved mounting and breadth of rotary joint availability.
The clamping torque is 40% higher when using the MK200, at 570 Nm, than that of the MR200. As with all Kitagawa tables, this maximum holding torque is determined by the point at which the force on the worm wheel causes it to displace by 30 µm. In contrast, other manufacturers use the slipping torque figure as a maximum, which Kitagawa regards as likely to cause inaccuracy at best, and catastrophic failure at worst.
In addition, drive torque is said to be the highest in class at 270 Nm, while the spindle through-hole diameter has increased from 45 to 70 mm. The faceplate type is specified by the customer, either with T-slots or pre-drilled holes, the advantage being that a chuck, trunnion or other work-holding device can be mounted directly to the rotary table’s spindle, reducing the distance from the spindle bearing.
For further information www.1mta.com 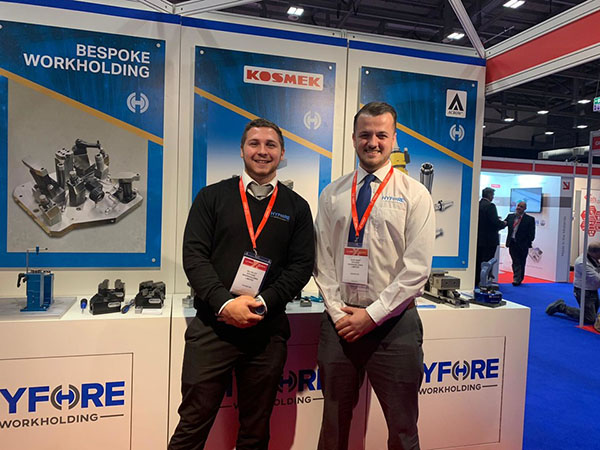 As a member of Made in the Midlands, work-holding specialist Hyfore regularly attends the annual Expo, with 2019 being no exception. Operating the stand this year were Oli Riley and Rob Wait. 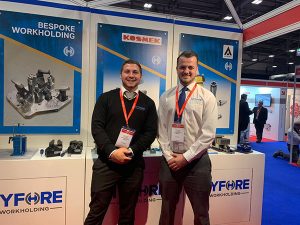 “The Expo gives us the opportunity to meet new people and network with people we already know,” says Wait. “It helps get our name out there a little bit more, and gives us the opportunity for more business.”
Hyfore remains proudly Coventry-based and supplies to a number of industry-leading firms throughout the Midlands.
“It’s a good opportunity for us to hone in on the fact that we’re from Coventry,” says Riley. “Coventry’s quite prestigious when it comes to the automotive industry and a lot of engineering and manufacturing, so it’s quite good to stick with our roots. Especially with the fact that the Expo’s actually in Coventry at that Ricoh arena, it’s perfect.
“I think manufacturing is definitely on the up again,” he continues. “We’re seeing a lot of projects in the Midlands and around the country that are starting to pick up more. Being out on the road and seeing different customers and speaking to them more often we find that actually, they’re benefiting from new projects coming about, and hopefully, it continues.”
Adds Hyfore’s sales manager Graham Cherry: “We’re always expanding and diversifying, constantly looking to grow our client portfolio and further our reach. We’ve got three new sales staff starting within the next 6-12 months, which will help us enhance our work-holding offer. We’re definitely seeing an increase in business and are looking to reinforce our already strong position in the market.”
For further information https://hyfore.com/ 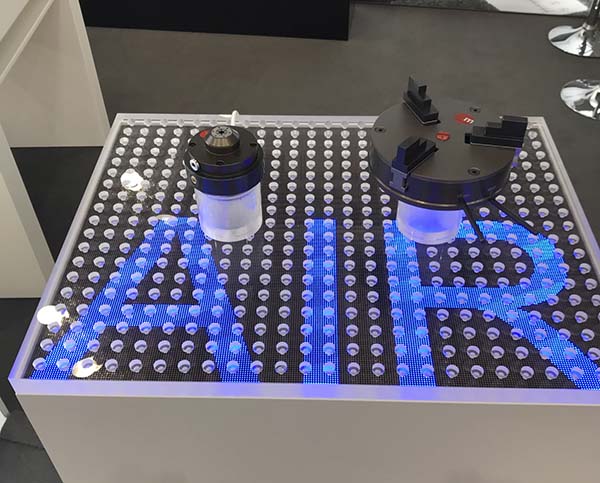 Maprox AIR chucks and the ER range of pneumatic collet holders for automation are now available in the UK from exclusive agent, Leader Chuck International. 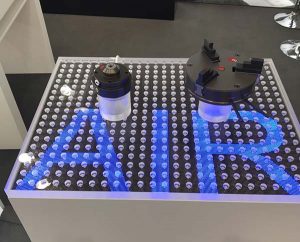 Maprox has a long history of providing fixture solutions for complex components, thin-walled parts, delicate geometries and other challenging products such as gears, shafts and bearings for the automotive, watchmaking and medical industries.
The Maprox AIR is fully automation compatible. A rotary pneumatic feed supports flexible mounting options and adjustable clamping force. With 8 mm of jaw travel, the chuck opens pneumatically against spring force. The spring on the top cover can be pre-tensioned to match application requirements. Repeatable inner or outer clamping can be achieved
with changeover times of less than 1 minute.
Measuring 160 mm diameter and with an ultra-low chuck body height of just 60 mm, the chuck occupies minimal space within any automation or robot-loading system. Maprox AIR has a flexible clamping range with the top jaw or pin jaw to suit the application. Interface compatibility is supported with shanks, intermediate plates or adapters. Further sizes will be available in the near future
“Jaws for this new chuck can be made of steel, coated or plain aluminium, plastic and so on, to match the component being held,” states Leader Chuck International’s managing director Mark Jones.
Designed to keep weight to a minimum, the ER collet holders are manufactured from ALTEF-coated aluminium and weigh less than 1 kg. In application, the user can choose to pneumatically control the ER collet holder laterally or from below. The central rotary feed-through on the bottom supports full rotation of, for example, turntables or indexing units.
For further information www.leaderchuck.com