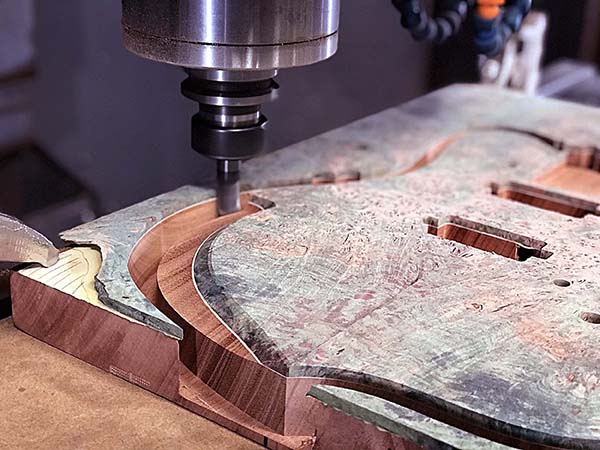 At the Market Overton factory of subcontract machinist Hi-Spec Precision Engineering, five Hurco machining centres and various other machine tools are to be found producing parts from mild and stainless steels, bronze, brass, aluminium and plastic over a single daily shift from Monday to Friday. Nothing unusual there, but the weekends bring a different and unexpected role for two of the Hurco machines.

On Saturdays and Sundays, Hi-Spec’s owner Darren Grainger and his brother Gavin indulge their lifelong passion for music by milling electric guitar bodies from solid wood. Initially they used CAD files downloaded from the internet, but latterly have produced five designs of their own, including one for a bass guitar. This hobby is proving lucrative, as some of the instruments sell both at home and abroad for up to £3500 under the brand name Grainger Guitars, which is owned jointly by Gavin and Darren.

Gavin says: “To produce the guitar bodies, necks and other parts from wood, we now mainly use a Hurco VM30i machining centre and sometimes also a smaller VM5i, both three-axis models that were installed in 2017. However, we started out two years earlier using other machines and began selling guitars in 2016 at exhibitions around the UK.

“All that’s needed is to wipe down the machine table on Saturday morning and block off the coolant nozzles to prevent ingress of sawdust,” he continues.“When we’ve finished profiling wooden components, we simply vacuum out any wood residue, clean down the machine, uncover the coolant holes and we’re ready to cut metal again on Monday morning.” 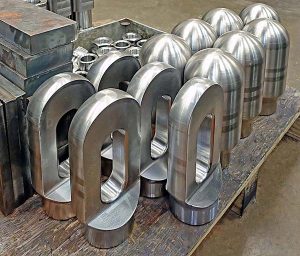 A large and exotic array of woods is used in the creation of the guitar bodies. Early materials were maple, alder and poplar, but lately the Grainger brothers have introduced swamp ash, mahogany, ebony, wenge, walnut, buckeye burl, limba, purpleheart and some wood/resin composites. Pearl and stone materials are also machined on the Hurco machines for the marquetry inlays.

Router cutters were used at the outset, but solid-carbide end mills and ball-nose mills designed for machining aluminium were found to produce a much better result, as the sharpness of the cutters virtually eliminates burrs and produces a fine surface finish. This strategy is consistent with the final use of ultra-fine, 2000 grit sandpaper with an average particle diameter of 10 µm to smooth the wooden components prior to the application of multiple coats of gun barrel oil to achieve a lustrous finish.

Everything for the guitars is manufactured in-house, including all metal components, apart from the pick-ups and their associated electronics. Unlike the wooden elements, the turned and milled metal parts are sold to other guitar builders worldwide over the Internet, forming another profitable sideline.

Commenting on the company’s main subcontracting business, Darren says: “In 2015, we invested in a second five-axis machining centre from Hurco, a VM10Ui, and at the same time upgraded the control software on a similar, pre-existing model to the manufacturer’s WinMax 10. The five-axis machines are used mainly for producing components using 3+2-axis strategies programmed conversationally directly at the control.

“Two years later we installed the VM5 and part-exchanged a small Hurco VM1 machining centre for the VM30i with a 1270 x 508 x 508 mm working volume so that we could produce larger metal parts for rock crushers,” he adds.“It is this machine that is also the mainstay of wooden component manufacture for our guitars.”

Darrensays that the Hurco control system on the latest machines has a smoother, more convenient touchscreen graphical user interface. Scrolling through fewer menus allows the operator to arrive at the required screen more quickly. Even a simple operation like entering a code to jog the axes while the doors are open is easier, without having to go through the diagnostics screen.

In addition, WinMax 10 software enables faster cycles through the use of Hurco’sUltimotion and Adaptipath control software, which has look-ahead and optimisation capabilities that reduce cycle times, especially when milling the corners of multiple pockets. The tool-change optimisation feature is also helpful, as it automatically rationalises the number of cutter exchanges for optimal efficiency.

“We have been able to save a lot of machining time through a combination of the latest Hurco software plus the use of trochoidal milling with solid rather than inserted carbide end mills,” says Darren. “In some instances, we have more than halved cycle times. For example, we produce batches of 38 puller ends for hydraulic tooling two at a time from EN24T billets in two operations on the VM30i in a cycle that previously took more than four hours. 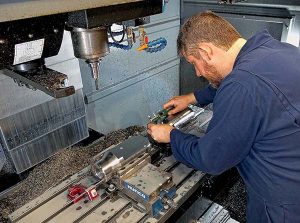 “Now, taking a 16 mm depth of cut with a solid-carbide, 12 mm diameter end mill at 6 m/min feed rate, and using Hurco’s twin-nozzle coolant delivery together with the standard air blast facility – which incidentally is used on its own when machining wooden components – the same job takes approximately two hours.

“In another case, production of a steel matrix used to take 40 and 35 minutes for ops 1 and 2 respectively, which have been reduced by an even greater percentage to 17 and 12 minute cycles.”

Hi-Spec Precision Engineering is continuing to grow, despite operating with fewer staff compared with two years ago, so profitability is up. The hydraulics sector accounts for around 40% of turnover, with the machined components frequently finding their way into hydraulic actuators and valves, rock crushers and access platforms. Automotive and agricultural parts are also routinely produced at the Market Overton factory.

Batch sizes range from one-off to hundreds for prismatic machining, while production runs on the company’s six CNC lathes can be in the thousands. Customers stretch from the south coast of England across to Norfolk, and as far north as Scotland.
For further information www.hurco.co.uk 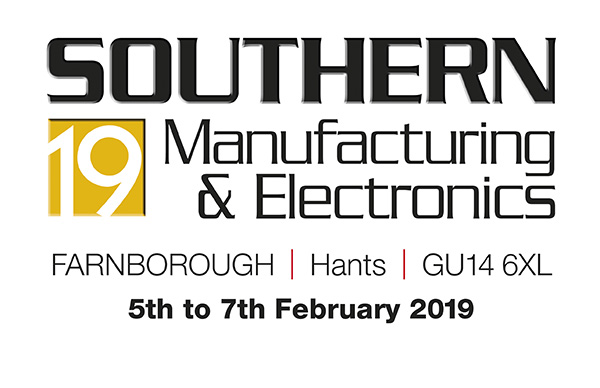 Southern Manufacturing & Electronics returns to Farnborough on 5-7 February 2019. Already nearing its maximum capacity, machine tools are emerging as one of the key features of the show.Many of the familiar big-name vendors of machine tools and associated equipment will return for Southern 2019, including Bystronic, Bruderer, Dugard, YMT and Haas among many others.

The 2019 show also sees the welcome return of some established brands which have not been seen for over a decade at Southern Manufacturing. For instance, Citizen Machinery UK will exhibit for the first time since 2007, joined by other notable former exhibitors such as Mitutoyo UK, Schmidt Technology, Filtermist and Hainbuch UK. Admission to Southern Manufacturing & Electronics 2019 is free.Farnborough Exhibition and Conference Centre offers free on-site car parking and is easily reached by road, air or public transport.
For further information www.industrysouth.co.uk

A collaborative research project between the AMRC and Sheffield University Management School (SUMS) is exploring ways to overcome the barriers that SMEs face when adopting new technologies to improve performance and drive innovation.The University of Sheffield’s AMRC and SUMS are combining their expertise to deepen the understanding around the obstacles presented by new technology introductions, and how businesses can be better supported to overcome those barriers. Programme leads have been named as AMRC company engagement manager Shirley Harrison and Tim Vorley, professor of entrepreneurship at SUMS.
For further information www.amrc.co.uk 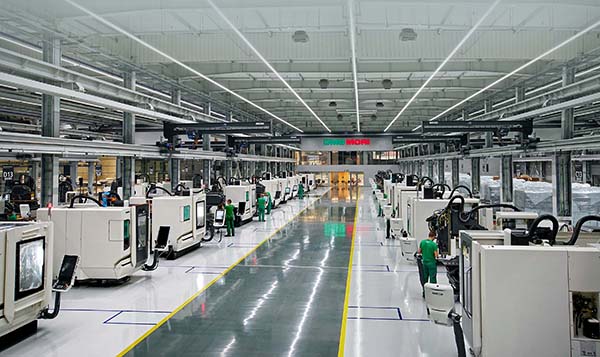 At a grand opening held last month, DMG Mori unveiled extensive improvements to its Famot machining centre and CNC lathe factory in Pleszew, Poland, one of the largest production facilities in the group with around 700 staff. A total of €60m has been invested, partly to extend the factory to 50,000 sq m, including 14,000 sq m of production area and 7000 sq m devoted to assembly, which together receive more than 140,000 parts a day from store. In the production hall alone, 50 machine tools, mainly from DMG Mori, operate around the clock. New also are a castings store, logistics hall and inductive hardening facility.

The remainder of the investment went on digitising the entire process chain, from receipt of order, through production planning and monitoring, machine data acquisition, supply chain management and machine assembly, to shipping. It is the first DMG Mori plant to operate digitally over a manufacturing service bus, end-to-end, on all added-value levels.
For further information www.dmgmori.com

Bolton-based Velden Engineering has continued its investment programme with the arrival of a Star ST-38 sliding-head lathe featuring T565 barfeed. With the latest technology such as live tooling and independently programmed axes, the machine will boost efficiency by allowing parts to be manufactured in one set-up, while also extending the company’s capabilities for complex mill-turn parts within the 42mm diameter range.Clifford Bromilow, Mechanical Engineering Apprentice of the Year 2018, will take on responsibility for the Star ST-38 as programmer, setter and operator.
For further information www.veldenengineering.co.uk