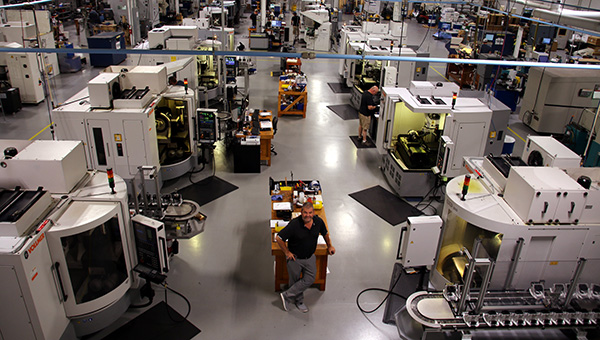 Through the 1980s and into the early 1990s, Ted Ford was working as a general manager for a single crystal diamond (SCD) tool company that was heavily involved in the superfinishing sector. However, mergers and acquisitions gave Ford the opportunity to buy the diamond tool division from Norton Abrasives and in 1993, STF Precision was born.

Unlike most cutting-tool manufacturers that graduate from standard cutting tools and progress to high-end product lines, STF Precision applied its expertise in ultra-precision super surface finishing SCD tools and transferred that knowledge to the diamond-coated and PCD cutting-tool sector – eventually progressing into the solid-carbide cutting-tool market. The journey from SCD into PCD started in 2001 when Ford sold the business to his son Jason Ford, who decided to extend the product portfolio. The Arden-based business duly bought a series of wire-erosion machines and then a PCD erosion machine from Vollmer.
Starting off with diamond-coated drills and countersink tools for the aerospace market, Jason Ford realised that the Vollmer QXD200 disk erosion machine was the optimal choice for the business.
“We looked at all the available options, but the Vollmer was by far the best machine,” he states. “As a company, we recognised the opportunities of erosion/grinding machines from Vollmer for developing fluted PCD tooling, especially with the rise of composite materials in the aerospace industry. We wanted to loosen the stranglehold that some competitors had on this market, and it was Vollmer that helped us to attack this area. In addition, we were a relatively small company at the time and Vollmer gave us favourable financial terms to get the first machine through the door.” 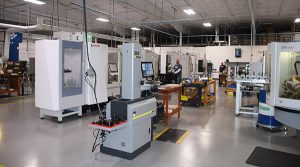 Bringing the first Vollmer QXD200 machine to the USA in 2006, STF Precision initially struggled to break the aerospace sector, but fortunately the flexibility of the QXD200 provided the opportunity to extend its offering for the automotive market.
“Being a business known for its micron precision, we started to get into the automotive industry and the production of cutting tools for piston production,” says Ford. “We started making groove tools, insert and form tools, and more. With an ability to produce tools to a precision level of less than ±2 µm and form angles below ±15 minutes, we found a niche manufacturing tools for high-silicone content materials in the automotive market. We got opportunities with tier-one manufacturers like Linamar, which makes parts locally. From there, we progressed to other companies such as Honda Canada, ZF, Denso, Borg Warner, Toyota and many others.”
Building this foundation for growth, the arrival of the first Vollmer machine was one of the cornerstones for success at STF Precision.
“From 2001 to 2008, we had grown from $750,000 turnover to over $3m,” says Ford. “With our investment in Vollmer technology and automation down the years, we now have a turnover of $12m and more than 70 staff. Today, we’re running machines unmanned overnight, which was a necessity for reaching our growth targets.”
Following the first QXD200 machine in 2006, another two QXD200 machines arrived between 2008 and 2010 for the production of milling cutters, reamers and drills, with a QXD250 installed in 2012.
“The wire machines we purchased before the arrival of the Vollmer models required a 4th axis rotary head for processing round tools,” explains Ford. “In contrast, the Vollmer QXD200s and QXD250 were at least 30% faster; they were far more efficient and certainly more accurate. Furthermore, without the wire we are removing the potential for breakages and downtime. We also installed the new QXD machines with 29 tool station loaders that gave us unmanned automated production around the clock and at weekends. Our production capacity more than doubled, with just a skeleton second shift to load machines outside of normal working hours.”
With its exponential growth trajectory, STF Precision progressed into more complex geometry PCD form tools for the automotive market. In 2014, this resulted in the business investing in its first Vollmer wire-erosion machine.
“Our customers were requesting more complex internal form tools and large diameter milling cutters, and once again we turned to Vollmer,” says Ford. “The solution was the QWD760 machine and, as far as I’m concerned, this is the most accurate wire machine in the world for processing cutting tools.”
The first QWD760 machine proved so successful, a second machine arrived in 2016. 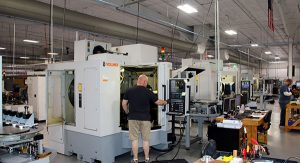 “The QWD760 is a great machine and we were so happy with it that we installed a QWD760H featuring a 12-station automated loader soon after the first machine was installed,” he says. “With our complex-geometry automotive tools taking upwards of 3 hours to process, the 12 station QWD760H can run for days without operator intervention.”
The added capacity provided by the automated Vollmer QXD and QWD machines has seen the STF Precision product portfolio expand beyond all recognition in recent years. Designing and developing solutions in close co-operation with its customers, the automotive customer base has evolved beyond bespoke piston production tools to specialised tools for engine blocks, cylinder heads, transmission casings and other powertrain, transmission, axle and suspension parts. The Vollmer installations have perfectly positioned STF Precision for growth in the automotive industry, with more than 65% of the company’s turnover generated from the sector. However, the proclaimed precision, productivity, capability and flexibility of the Vollmer machines have also positioned STF for growth in the aerospace market.
“Super surface finishing SCD cutting tools have remained a small percentage [5%] of our business due to their niche market applications,” says Ford. “However, these SCD tools are also gaining popularity in the automotive market and this puts us in a good position moving forward. That said, the real growth market at present is aerospace. In recent years, this has grown to become 25% of our turnover and we see great potential for growth here.”
The company has also witnessed significant progress in its solid-carbide tooling department. Here, STF Precision once again turned to Vollmer, installing the Vgrind 160 with HP160 pallet loader in 2017.
“We bought the Vgrind 160 because it has the flexibility to pocket PCD tools and manufacture complete solid-carbide tools,” says Ford. “Our initial thinking was to install the machine for pocketing PCD tools, but our growing deviation into carbide tools has seen the Vgrind become dedicated to producing carbide drills, end mills and reamers from 2.5 to 25 mm diameter.”
The five-axis Vgrind 160 incorporates two vertically aligned grinding spindles with the wheel set at the C-axis pivot point. This novel kinematic configuration enhances rigidity and the subsequent surface finishes on the cutting tools, while reducing processing times.
“We are now manufacturing and supplying our customers with over 300,000 PCD inserts every year,” says Ford. “Added to this, we’re producing hundreds of bespoke PCD cutting tools and brazed tools each month. This number of PCD tools doesn’t include the recurring servicing of PCD tools for existing customers. However, it’s the solid carbide market that is growing in volume. The carbide business is lower cost, higher volume and we are already manufacturing a few thousand end mills, reamers and drills every month.”
With continued growth, STF Precision visited the Vollmer VDays event in 2018 and was immediately impressed by the latest VPulse 500. Utilising the tried-and-tested Vollmer VPulse EDM erosion generator and incorporating it for the first time into wire erosion, the VPulse 500 demonstrates higher material removal rates or optimised surface quality. Furthermore, the VPulse 500 has been purchased with the HR external workpiece storage and automation system, which enables the customer to process up to 16 tools with a maximum diameter and length of 300 and 500 mm respectively.
For further information www.vollmer-group.com