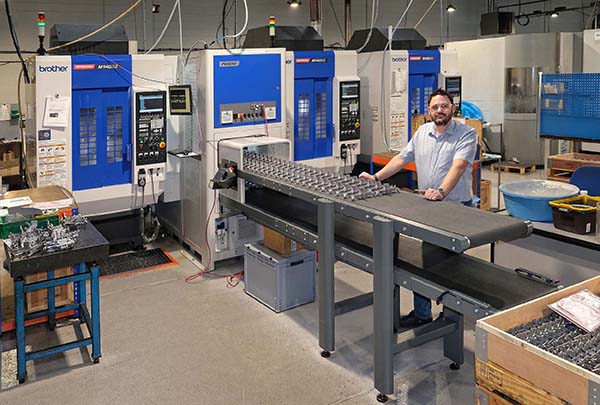 “About 20 years ago we installed a large flexible manufacturing system consisting of six three-axis, 40-taper, half-metre-cube machining centres linked by a three-level storage and retrieval system for 104 machine pallets,” he says. “Having served us well, it is being decommissioned in February 2021. We will relocate the first Brother cell into part of the space it releases, with the second placed alongside it, all in a relatively small footprint.”
Since 2018, Roscomac has instigated a major shift towards five-axis machining. The company has spent the majority of a £4m investment in that period on multi-pallet pool systems with large tool magazines.

“They machine parts in fewer operations while achieving a high level of automation, without the complexity of an FMS based on three-axis capacity,” explains Martello. “Had we not gone down the five-axis route we would be dead in the water by now. With the two Brother systems, we have gone a step further by installing our first 30-taper five-axis capacity for the automated, ultra-fast machining of aluminium components in fewer set-ups.” 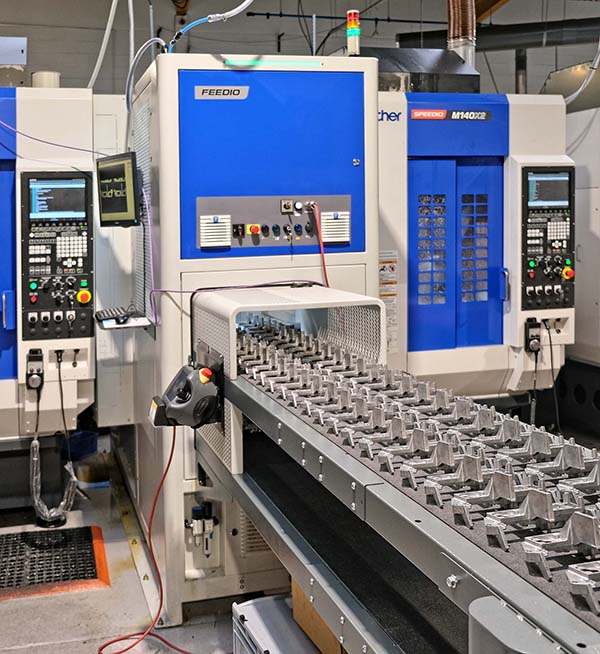 He says that while the FMS was an efficient production facility, the three-axis CNC technology often required the multiple clamping of several parts in expensive staged fixtures for undertaking several separate machining operations. The system’s utilisation dropped because the type of work coming through the door was changing; it was becoming lower volume and more complex. Production was more difficult to control and the increasing number of set-ups raised the labour cost content of component machining, as operators were frequently at the load/unload stations.

The timing of the arrival of the first Brother cell, a matter of months before the start of the COVID-19 pandemic, could not have been more opportune. Nearly a quarter of Roscomac’s turnover normally comes from the medical industry, but in 2020 that proportion doubled, leading to an increase in annual turnover of £2m despite the virtual disappearance of aerospace work, which historically has accounted for 10% of Roscomac’s throughput.

For many years the subcontractor had been machining four different components for hospital syringe pumps from aluminium castings and extrusion. Machining previously took place at a rate of 4000 per month per part number on 40-taper machines in the FMS, but were ideal candidates for transfer to the first Brother cell. The cell therefore features a turnover station so that one Speedio can carry out Op 10 while the other completes Op 20 after the component rotates, all fully automatically.

These 30-taper, five-axis machines could produce the parts much more cost effectively in two operations, 24/7, without operator intervention, apart from placing raw material on to the input conveyor and unloading finished parts from the output conveyor. Conversely, unattended and lights-out running was impossible on the FMS due to the constant loading and unloading. In practice, for these components, the system was only capable of one-quarter of the output compared with the Brother cell. 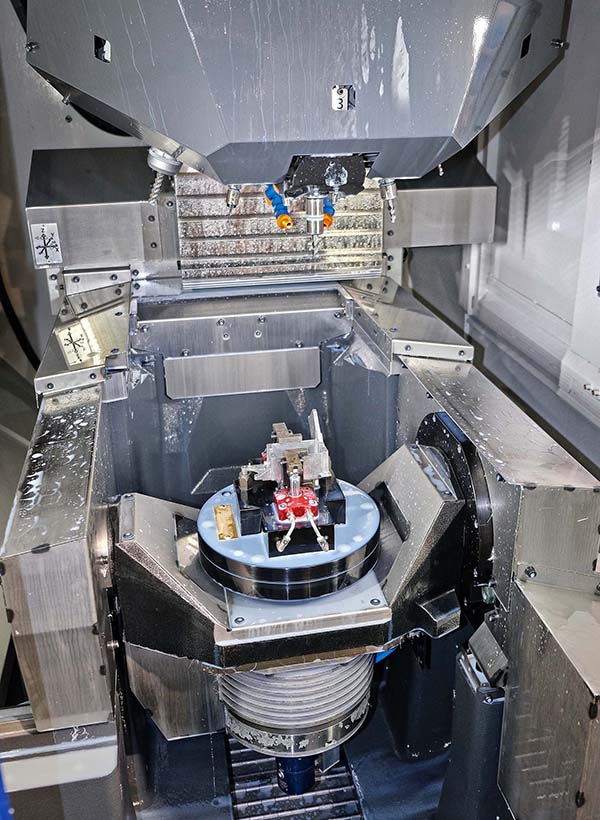 Within a month of the pandemic starting the customer quadrupled the order quantity to 16,000 per month per part. Martello says that it would not have been feasible to achieve even half that amount using the other plant in the factory, which would have meant turning away business. As it was, the Brother cell was able to cope and started paying for itself and making a profit from day one. The operator only had to load and unload the conveyors and keep an eye on production, so was free to run other machines.

By the middle of 2020, due to the success of the cell, Roscomac transferred all the remaining work from the FMS and started planning for its removal. As the Brother cell was working flat out, this work was initially put on to 40-taper machining centres, but to add more high-speed capacity, a third Speedio M140X2 was hired from Whitehouse Machine Tools and operated as a manually-loaded machine.

“It really focused the mind, seeing the operator having to attend the machine almost continuously during the relatively short Op 10 and Op 20 cycles, so we decided to purchase a second fully automated Brother cell, exactly like the first,” says Martello. “Whitehouse supplies them as turnkey installations with time studies, programs, fixtures and tooling. We have the skills to do this in-house, but we are very busy at the moment with the surging medical work. In any case, we find that we learn a lot from Whitehouse each time they prepare and supply a fully functioning production cell, so we get the benefit of knowledge transfer, along with their experience of the best way to produce parts most efficiently.”

The Speedio M140X2 has a machining volume of 200 x 440 x 305 mm and incorporates a 2000 rpm turning table. Together with the +120° to -30° swivel of the trunnion carrying the table, the two extra rotary CNC axes are useful for automatically positioning components in-cycle for predominantly three-axis machining, although there is some four- and five-axis simultaneous metalcutting within certain cycles. 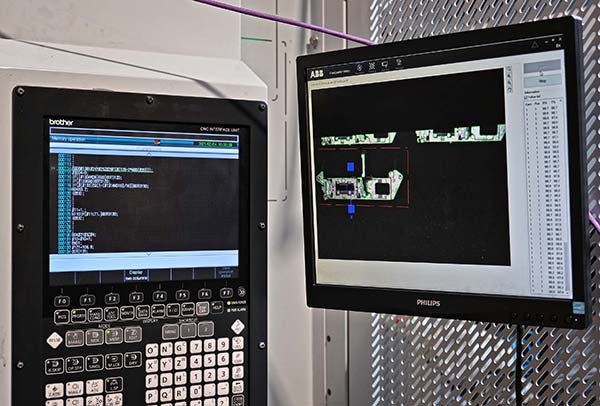 High machining productivity comes in part from simultaneous movement in the X, Y, Z, A and C axes, plus tool change when the machine is not cutting. Tool change time from the 22-position magazine is 0.9 seconds, giving 1.4 seconds chip-to-chip, while spindle start/stop is completed in 0.2 seconds. Cutting feed rate is up to 30 m/min, with 50 m/min rapids.

The Feedio robotic component handling system option exploits this speed to the maximum by delivering parts to the spindle faster than an operator is able to, and without interruption. The plug-and-play automation unit, which communicates with the machining centre via a Profibus interface, features a six-axis ABB robot and the manufacturer’s smart teach pendant incorporating a customised Speedio page.

A camera-based vision system and built-in PC allow the robot to detect raw material on the upper input conveyor. After machining, components return to an output conveyor positioned below the first.

Martello regards the Brother cell, based on very fast 30-taper machines, as being the ideal solution for machining aluminium components, in this case for medical applications. The five-axis capability and turnover station enables the completion of mainly 3+2 machining in two operations without manual handling. Some fully interpolative five-axis sequences are also completed. Jobs requiring straightforward three-axis prismatic cycles without any need for the rotary axes will in future be machined in the cell, if expedient, simply to take advantage of the automation.

“This was new technology for Roscomac and we leant quite heavily on Whitehouse in the early days,” concludes Martello. “We have received very good support from this supplier throughout, with their engineers sometimes on-site at weekends, which was especially important in view of the urgency of the COVID-related work. As the very large volumes associated with the pandemic subside, there will still be a lot of medical work around due to the backlog of elective surgical procedures. We can use the Speedio/Feedio cells to fulfil these contracts more economically.”