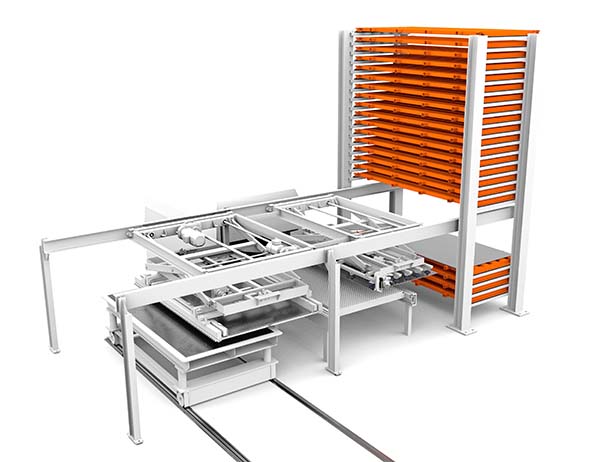 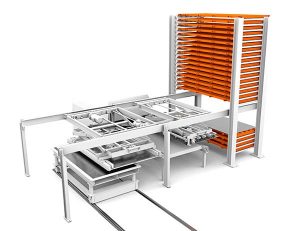 With this in mind, Kasto has introduced a new system for efficiently transferring material automatically between its sheet-metal storage towers and flat-bed processing plant, such as laser-cutting machines and turret punch presses. The system enables minimally attended production, achieves high throughput speeds and relieves staff of the laborious and potentially risky task of handling large metal sheets.
The system comprises two sheet manipulators suspended from a gantry projecting from the storage tower and two pick-and-place tables below. These tables are positioned side by side at the same distance apart as the manipulators; the table nearer the tower being a similar distance from it and fixed to the floor. The second (shuttle) table has a slatted surface and is rail-mounted, allowing it to travel to a production area and back.
Each manipulator operates differently in that the one closer to the tower uses an array of suction cups to hold the sheet during lifting and lowering, whereas the other employs a rake-type gripper which opens so that the rake tips move further apart than the width of the sheet, allowing it to be lifted from underneath off the slatted shuttle table after the rakes have closed. Regarding motion, the manipulators always move horizontally in unison and vertically in opposite directions.
Kasto’s system is not designed to return the sheet containing laser-cut or punched components back into the storage tower, although such fully-automatic operation can be supplied by the company with double pick-and-place stations, and with manipulators moving independently – one above the other.
For further information www.kasto.com