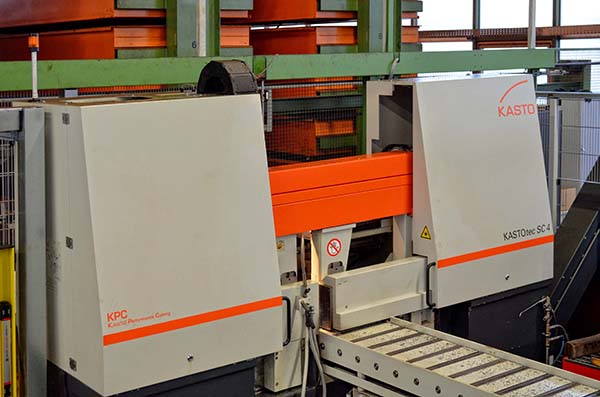 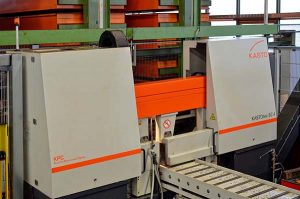 However, to meet increasing demand for its hydraulic cylinders, the company decided to modernise and expand its production systems. So Kasto was commissioned to upgrade the existing storage system for steel bar and tube, as well as a pair of bandsaws, and equip it with customised robotic handling.
Liebherr-Components has specialised in the production of hydraulic cylinders since 1958. Every year approximately 75,000 hydraulic cylinders, suspensions and system solutions for cylinders leave the plant to be used worldwide.
Stefan Lützel in the industrial engineering department at Liebherr-Components says: “A Kasto cassette storage system with 733 locations, an automatic cantilever arm and a large bandsaw from the KASTOhba series provided reliable service for 26 years. Until recently a production circular saw which was of a similar age from the same manufacturer was also in use.
“We have granted this saw a well-deserved retirement, as in 2016 we modernised our sawing technology and increased cutting capacity to 430 mm diameter with the addition of a KASTOtec SC 4 bandsaw, which is particularly effective at processing difficult-to-cut materials,” he adds. “The saw is able to operate with either a high-speed-steel or a carbide blade and is equipped with the Kasto Performance Cutting (KPC) package, which includes improved band guidance and vibration absorption for even higher cutting efficiency.”
Furthermore, Liebherr-Components together with Kasto developed a custom-made solution to automate the handling of cut pieces with an industrial robot moving between the two saws on a linear track. The robot is equipped with several exchangeable magnetic grippers that are able to pick-up various cut lengths weighing up to 350 kg from the sawing machines.
For further information www.kasto.com