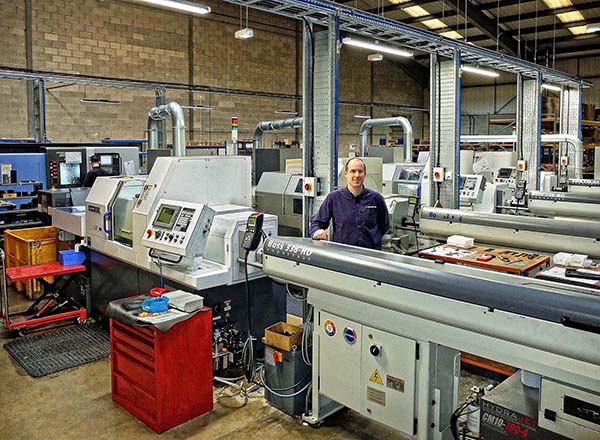 Since moving premises in Bicester at the beginning of 2015, subcontractor SRD Engineering has approximately trebled its turnover and headcount, a rate of growth that accelerated during 2018 due to the arrival of three new sliding-head (Swiss-type) CNC turning centres from Citizen Machinery. 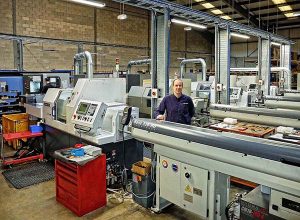 Joining a 20 mm bar capacity Citizen Cincom L20 Type VII lathe installed in 2009, which helped the contract machining company to weather the recession, two further models for processing similar size stock were installed in March and August last year, followed by a 32 mm capacity machine in November. It is noteworthy that the decade-old lathe is currently running 24/7 and still holding tolerance well.
Precision machining is essential at the 18,000 sq ft Bicester factory, as 60% of the company’s business comes from the Formula One sector, with most of the remainder received from customers in the aerospace and electronics industries. Dimensional and concentricity tolerances down to 6 µm are held on some 50 to 60 mm long, 3 mm diameter components, for example.
To help achieve this level of accuracy reliably, even during unmanned running, all of the latest sliding-head lathes are equipped with Citizen’s LFV (low frequency vibration) functionality. The patented system allows the stringy swarf generated when machining aluminium, stainless steel, nickel alloys, copper and plastics to be broken into shorter chips, the length of which can be controlled by the cutting program. 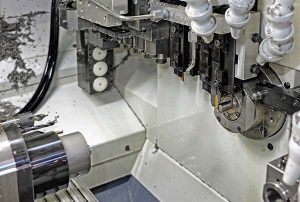 Mark Bonham, joint managing director with his brother Paul of the 30 years established, family-owned company, says: “We had no hesitation in choosing the LFV option on the new Citizen lathes, as being a subcontractor we have to process a broad variety of materials. Often they are not short chipping, and it is difficult to break the swarf using chip-breaker geometry on the cutting tool and/or high-pressure coolant.”
He adds: “With LFV, which acts in two CNC axes simultaneously and is part of the control’s operating system, as distinct from a macro in the part program, it is possible to regulate chip size closely without compromising the life of the cutters. In fact, they tend to last longer and break less often.”
Bonham explains that not only can the length of the chip be specified in any given program according to the material being cut, but LFV can be applied to different parts of the cycle, such as when turning a deep groove in stainless steel, an operation that is particularly prone to producing a tangle of swarf. LFV avoids a ‘bird’s nest’ forming around the sub-spindle and inhibiting synchronous component pick-up for reverse-end machining, or entanglement of a tool leading to its breakage or compromised component accuracy and surface quality. 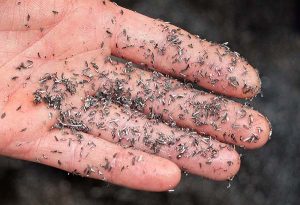 The reason LFV is not necessarily applied continuously to a whole program is that the technology lengthens slightly those parts of the cycle due to repeated periods of air cutting lasting microseconds. It is this action that breaks the swarf into short chips and it also has the effect of improving the penetration of coolant into the cutting zone, which is a prime reason behind the extended
tool life.
If a job is particularly price-sensitive, LFV use can be minimised or even switched off during manned operation, but the system is so flexible it can be reintroduced for lights-out running to ensure a full ghost shift’s production in the tote the next morning, without fear of stringy swarf impairing turning and drilling efficiency, and possibly recycling from the conveyor back into the working area and jamming the machine. Thus, a weekend’s worth of parts can be reliably produced, whereas without LFV there is a likelihood of only four hours of output before the lathe stops automatically in the absence of an operator to clear the swarf.
Bonham says: “LFV chip breaking is a huge selling point for Citizen turning centres. We visited their headquarters and showroom in Bushey to see a demonstration, and it was clear that the technology is able to resolve a lot of difficulties related to swarf management and temperature control when turning and deep-hole drilling. The benefits include better accuracy of machined components and longer tool life.”
The impetus last March for installing a seven-axis Cincom L20 Type XII LFV with a Y axis on the counter spindle and a 135° B-axis spindle integrated into the gang tool block for both front and back machining, was down to the original Swiss-type lathe being fully occupied, while enquiries kept coming in for large volume runs of typically 10,000 per month. One of the contracts secured involves producing a two-part, press-fit assembly with a threaded insert that serves as a stainless steel oil restrictor used in the aerospace industry.
The machine is more or less devoted to this ongoing job, so a Cincom L20 Type VIII LFV was purchased on specification five months later and was immediately busy producing diverse parts for a number of existing and new customers. It was at this point that the Bonham brothers and their father Steve, who is still active in the business, really appreciated how much money can be made using this type of manufacturing plant.
As a rule of thumb, they noted that the cost of a Swiss-type lathe is around twice that of a fixed-head machine, but the former is able to produce twice as many parts, allowing a subcontractor to invoice around double the amount per month, per machine compared with fixed-head capacity. The earnings per pound invested are therefore equivalent. The big saving is that one operator is able to attend all four of SRD Engineering’s Cincom sliding-head turning centres, whereas to achieve the same output from double the number of fixed-head lathes, which have to be individually manned for Formula One work, eight operators would be needed, resulting in much higher labour costs. 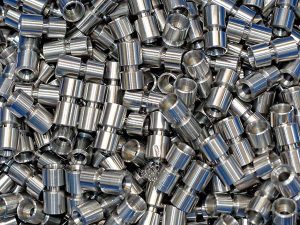 With this in mind, and having received a request to quote for producing 10,000 1” diameter nylon fasteners per month, a 32 mm bar capacity Cincom L32 Type VIII LFV was sourced from Citizen last November and has been machining the parts ever since. Here again, low-frequency vibration chip breaking has proved invaluable for keeping production going during periods of unattended running.
For further information www.citizenmachinery.co.uk