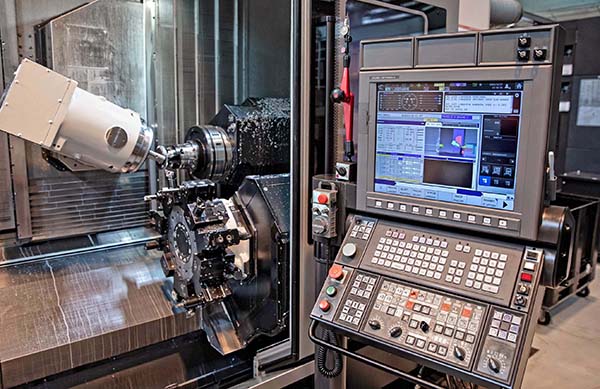 Collins Aerospace in Figeac, France designs and manufactures systems and components mainly for the aerospace industry. The company is one of the world’s leading producers of propeller systems for aircraft, cockpit and cabin equipment, and horizontal stabiliser actuators. At its plant in the southwest of France, Collins Aerospace also manufactures propellers for the Airbus A400M. Part of the company’s activities involves the production of families of gears, which was formerly carried out in multiple operations by conventional gear cutting techniques.

Following the purchase of new, modern machine tools with process-optimised software on which the spindle speed and axis motions can be closely controlled, including a multi-tasking turn-mill centre, Collins switched to gear skiving tools from German tooling manufacturer, Horn. The products are available in the UK and Ireland though subsidiary company Horn Cutting Tools.

Collins and Horn have been working together for 30 years. The former’s Pascal Janot, who is in charge of tool procurement, recalls: “It all began when we started using the tooling supplier’s Mini and Supermini boring, profiling and grooving systems to machine Inconel. Our company relies on Horn for the majority of parts where we need to cut grooves, but we also buy milling solutions from the same source.”

Pascal Moulènes, process developer specialising in gears at Collins, adds: “Horn does not just offer excellent tools. Thanks to the high quality of its support and services, the company is our preferred partner for tooling. Many companies can sell, but it’s rare to find one that can develop manufacturing strategies and actively support their implementation.”

Moulènes, together with machine operator Jean-Paul Noyes, team leader Jean Pierre Destruel and process engineer Joel Bousquet, teamed up with the tool supplier to implement the skiving process for various types of gears. They first saw the process being used by a machine tool manufacturer to mass-produce components, sparking considerable interest within Collins as to how it could be exploited at the Figeac factory. The technology also shaped the company’s selection of machining processes and the purchase of new machine tools. 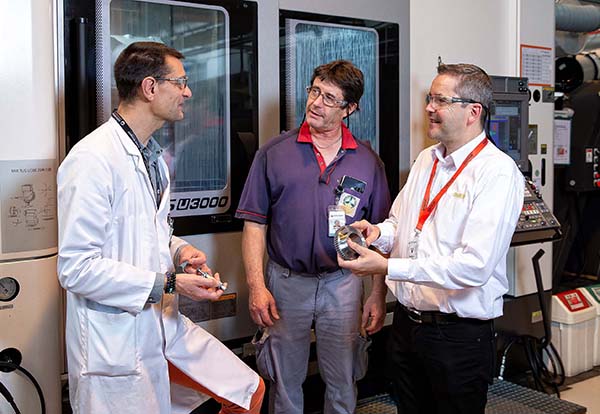 As a point of note, Moulènes witnessed the process in action on the Horn stand at the EMO machine tool exhibition. Engineer Emmanuel Gervais, who is the primary contact at Horn for applications involving the machining of critical aerospace components, provided technical support for the project. Based near Toulouse, the epicentre of the European aerospace industry, Gervais also supports the development of new tool concepts by providing valuable knowledge and experience.

With the help of the new skiving technology, Moulènes was able to optimise the production processes because fewer set-ups were required. He also managed to eliminate the idle time between process steps. As well as reducing cycle times, the technology increased component quality.

“The gear skiving process was new to Collins, so we had to start by familiarising ourselves with it in detail,” says Moulènes. “However, we were not in a position to carry out a lengthy evaluation because of the sheer volume of orders going through our factory. Horn therefore suggested performing trial runs at its test centre in Tübingen, Germany.”

Gervais adds: “The optimum machining parameters for the gear material, a nickel-chromium-molybdenum alloyed case hardening steel (1.6657), which is tough, wear-resistant and relatively difficult to machine, were determined in Tübingen following multiple series of tests. The results were reproducible across all products and the quality was consistently high.” 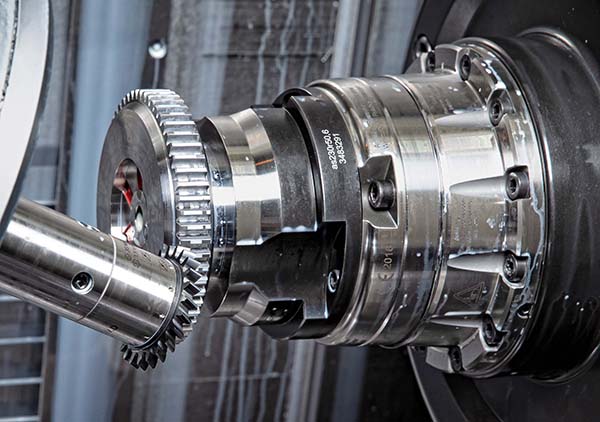 Horn sent the test parts back to the Collins plant to check the quality. The maximum permissible profile error for the gear teeth is 0.03 mm and the deviation measured was significantly lower than this. For the application, the supplier provided gear skiving tools with a concentricity correction system. Naturally, the primary aim was to achieve the appropriate component quality, but long tool life was also very important to control costs.

The introduction of gear skiving at Collins went without a hitch following the successful tests. Importantly, the cutting data determined for the process in Tübingen was transferred virtually unaltered for implementation in Figeac. The machining time for the gear teeth alone was more than halved in comparison with the previous process. Overall, gear machining time reduced from more than 20 minutes to just 7 minutes due to just fewer set-ups.

The gear skiving process at Figeac is divided into 14 roughing, two pre-finishing and two finishing operations, leaving a grinding allowance of 0.1 mm. After hardening, the component is ground. As an indication of the extended cutter life that may be expected, one tool manufactures many hundreds of gears in five variants having the same module.

Horn’s tool range includes gear skiving tools for manufacturing external and internal gears, splines and other internal profiles. The key advantages offered by gear skiving are significantly shorter process times compared with broaching, the ability to use the technique on modern turn-mill centres, turning and gear cutting in one clamping, and the possibility of hard machining gear teeth from solid workpieces.

Gear skiving tools are for the production of medium to large batches. Each tool is individually adapted to the application and to the workpiece material, with the various tool interfaces based on the number of teeth and the module.

Horn’s gear cutting portfolio comprises a range of solid-carbide tools, interchangeable head systems and tool holders with indexable inserts, for the production of gears from module 0.25 to 30. Whether this involves spur gears, shaft/hub connections, worm shafts, bevel gears, pinions or customised profiles, Horn says it is possible to manufacture all of them extremely cost-effectively.