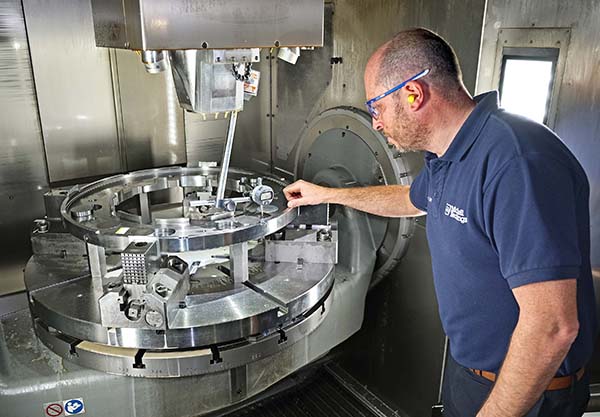 ”It is rare to find machine tools that are equally good at turning and milling, but Hermle machining centres are,” states Chris Kemp, manufacturing engineering manager at Michell Bearings, a company which has used its investment in the latest Hermle machine-tool technology to reduce the number of set-ups from seven to just two, a move that cut the cycle time for the machining of bearings by seven hours.

AGM Michell invented the tilting pad bearing. The company he founded in 1920, Michell Bearings, today manufactures a wide range of white metal- and PTFE-lined bearing products. Customers are to be found worldwide making pumps, motors, turbines and generators for the commercial marine, naval and industrial markets.
The mainstay of production on the shop floor at the South Shields factory is a pair of highly specified, five-axis mill-turn machining centres built by Hermle, Germany, and supplied by Kingsbury, the sales and service agent for the UK, Ireland and Middle East.
“Until 2017, we produced all bearing parts that fell within a 600 mm cube in-house and subcontracted the rest,” says Kemp. “However, it was becoming increasingly difficult to find contract machinists who could produce good quality parts in low volumes, at competitive prices. We therefore decided to invest in equipment that could machine cylindrical components up to 1200 mm diameter and their prismatic equivalents.” 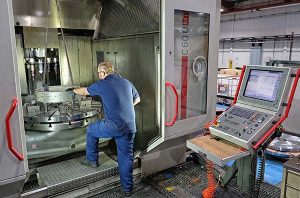 A five-axis mill-turn machine was the preferred option, as this style of production centre offers a single-platform solution for producing all of the main parts that go into a vertical bearing, as well as four principal constituents of a horizontal bearing. As ones and twos are typically machined, cutting out set-up time is especially important for cost-effective production. The traditional process for machining a vertical casing formerly took seven operations, which are compressed into two set-ups on a Hermle mill-turn centre, eliminating five re-clamping steps that save around seven hours per component.
Kemp was familiar with the Hermle brand, as many such machines are in use at a nearby aero-engine factory that he visited in the recent past. Other potential suppliers of mill-turn machines were also approached. The Hermle C60 UMT with its 1200 x 1300 x 900 mm working volume was selected due to its robust construction and the high-precision machining of which it is capable. This factor is crucial as bearings include tight tolerances, such as 25 µm maximum total runout over 400 mm for the perpendicularity of a face to the bore.
During cutting trials, the machine was also found to be capable of turning a 0.4 Ra surface finish on bearing faces, saving the time and expense previously involved in grinding and polishing them.
The Hermle machining centres are equally good at turning and milling, even when roughing due to the ability of the turning table’s 4000 Nm torque drive to handle high forces up to 400 rpm without stalling. 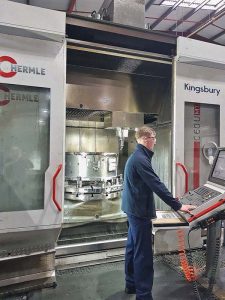 Previously used by the Nuclear AMRC in Rotherham, the machine was transferred by Kingsbury to South Shields. Within three weeks it was in production and has been running 24/7 ever since. Kemp says he had never seen a machine of this size installed in a factory so quickly. Part of the reason is the Hermle’s one-piece construction with triple guideway system above the work zone for the Y-axis gantry carrying the X-axis slide. This configuration allows the machine to be craned in and placed on a foundation without having to be fixed to the floor. He believes the fact that major machine elements are not bolted together raises the milling and turning accuracy.
The high performance and reliability of the Hermle led Michell Bearings back to the same source in 2019 when a second mill-turn centre was needed to meet capacity demand. This time a new, slightly smaller C52 UMT was selected with a 1000 x 1100 x 750 mm machining envelope. 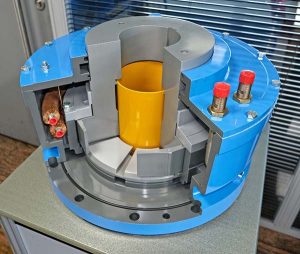 An important part of the machine packages supplied by Kingsbury is the aftersales service provided by the agent and its principal, which Kemp describes as “phenomenal”. He says that on the rare occasion there has been a failure, a telephone call to Kingsbury in Gosport often solves the problem. If not, a diagnostic dump from the control is emailed to the agent, which can be forwarded to Hermle if necessary for a more in-depth analysis. If there are, say, three parts which are suspected to be causing the issue, the Kingsbury engineer will bring all three, usually the next day, allowing the correct part to be fitted so that the machine is quickly back in production. “I have never experienced such good service before,” concludes Kemp.
For further information www.kingsburyuk.com