An industry-backed set of engineering awards is now open for nominations – and the body responsible is urging talented individuals and companies to put themselves forward to be in with a chance of winning. Semta has been running its annual Skills Awards for five years. The 2018 awards – which will be hosted by BBC journalist, presenter and former Young Engineer for Britain, Steph McGovern – will take place on 1 March at the Park Plaza Westminster Bridge in London, with entries open until 30 November. Over 500 people attended the 2017 awards ceremony, including senior names from industry and politics. 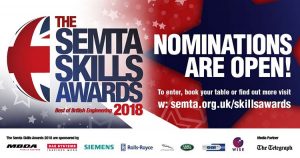