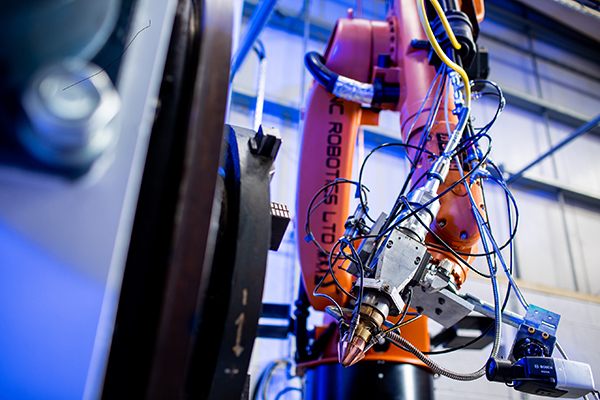 The installation of advanced technology supplied by CNC Robotics at ASCO Engineering and Surface Technology means the company can now offer a wider range of machining, coating and repair processes. By adding a robot-based system for laser-metal deposition and hard-facing cladding, CNC Robotics has extended the range of manufacturing techniques used at ASCO.

Andy Deegan, the company’s chairman, believes that the system has made ASCO more versatile than any equivalent supplier in Europe, creating the ultimate one-stop-shop.
Based in Skelmersdale, Lancashire, and with a second site in Dubai, ASCO offers a comprehensive service incorporating CNC precision machining, fabrication, surface coating, diamond grinding and superfinishing repair technologies. Alongside an extensive machine shop equipped with CNC lathes and machining centres, the site houses specialist coating equipment, including proprietary systems specifically designed for the company’s processes. To support manufacturing operations, ASCO’s in-house metallurgical laboratory offers the testing of coatings to international standards and CNC co-ordinate measuring machines for dimensional inspection, ensuring the certification of precision components to within microns.

Laser-metal deposition and hard-facing cladding allow the deposition of coatings such as tungsten carbide, Stellite and Inconel with a significantly lower and more localised heat-affected zone (HAZ), even when using materials that are difficult to weld. This capability means that the process has a minimal impact on the mechanical properties of the substrate material, and reduced potential for distortion and damage to the chemistry and structure of the base core material. In addition, the small melt pool enables the processing of very complex geometries in a single set-up, when depositing protective surfaces, undertaking repairs or creating near-net shapes.

The flexibility of the robot cell supports the ability to work with very complex shapes. Offering six-axis movement, the robot is fitted with specially designed work holding that adds a further three axes, giving the potential for nine-axis operation. In addition, an optional special head allows the internal cladding of bores up to 2 m in length and down to 55 mm bore size.
Deegan had used robots in the company’s thermal spray booths for several years and recognised their advantages in repeatability and consistent quality. With high levels of dust and noise in the booths, they also provide health and safety benefits. However, he felt extra support would prove beneficial in developing the new process. 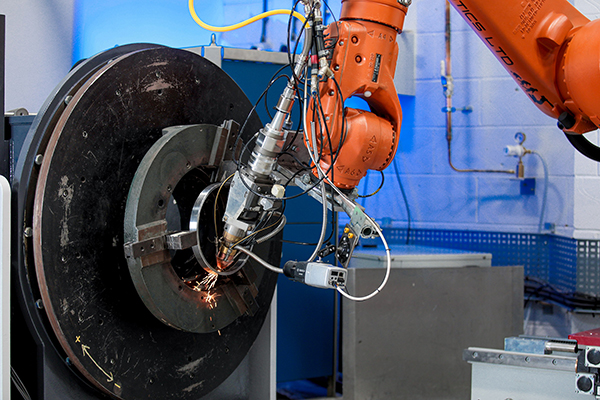 By chance, Deegan met Jason Barker, chief technical officer at CNC Robotics, at a classic car show.
“We started talking about Jason’s car and things developed from there,” recalls Deegan. “I explained my idea for a robot-based laser deposition system to Jason and it soon became clear that he was the right man to make it all work.”

The main challenge for the system resulted from the variety and complexity of the shapes processed at ASCO Engineering, since the laser has to be as near as possible to 90° to the surface of the part. To overcome this obstacle, CNC Robotics proposed a Kuka robot that includes very few restrictions on its range of movements.

Head of the laser department at ASCO, Andrew Mawsley, worked with Barker and the CNC Robotics team to install and test the new process.

“It seemed quite complicated at first but, once Jason had helped me to get familiar with the system, it became much easier, even for the more complex jobs,” he says.

Mawsley had a basic knowledge of C++ programming from his university course and also uses Orange Editor software on a laptop to create programs for the robot. 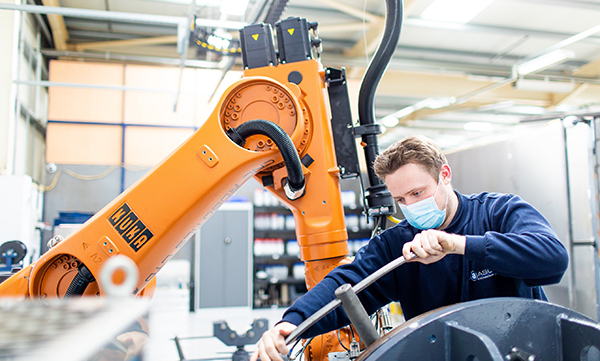 “Using the laptop, rather than the robot control, means that I can start one process running and begin programming the next job,” he explains.

While the new system is predominately for adding coatings to new parts, it has also proved valuable in component repair. For these projects, repair material is applied in layers of up to 1 mm per pass and then ground back to give the final surface. Dependant on client requirements ASCO is, in reality, able to clad to any thickness.

The main benefit of the new system is the consistency of results. Many of the coating materials used at ASCO Engineering are very expensive blends that are necessary to provide the required corrosion resistance and wear resistance. Many of the parts made by the company find their way into demanding applications, such as those in the oil and gas, power generation, mining, and aircraft industries, where any failures can lead to costly losses in production.

“The robot system is at its best when we are working with batches of parts,” states Deegan. “We can process the first part, confirm that it’s dimensionally accurate and carry out full laboratory checks on the surface integrity. Once we know that we’ve set the correct parameters for the first part, we can rely on the repeatability of the robot to ensure the rest of the batch will be equally good.

“The repeatability also helps us to meet on-time delivery requirements,” he adds. “After the first part has been completed, the time the robot will take to repeat any task is very predictable, which makes scheduling easy. If we can guarantee high quality and offer on-time delivery, clients won’t have any need to go elsewhere.”